While that is vague enough to elicit smiles from most of you, I actually DO need help with my latest music video!

Here is what I am looking for:

I know that requests 4 and 5 take extra magical skills, but this community is certainly not short on talent.

Just to give you an idea for 5, I thought Bugbear would look kinda foolish… but I am open to whatever.

What’s in it for you? A special shout out in the forums and on my youtube page!

Thanks in advance for the help!

Probably, you will have someone to make you something better ahah. But it was fun to do !

Ok, I come seeking the help of the community again!
I am looking for a pic of the Devour image that appears over troops.
If you have access to that and can post it here, I would greatly appreciate it!

I have looked online but have failed to procure said pic.

Thanks in advance for the assistance!!

If you happen to have a video of a troop being devoured… a link to said video would be awesome as well!!

Best i can do brudda

@Tacet got at least one devour in his Guild Wars Day 2 video. I know there is one at the 38 minute mark.

I would guess he should give you a thumbs up on using the clip or not.

Also, if anybody has a pic of a lvl 1 Great Maw… I know, what are the chances but still…

And a Maw with crazy stats. (EDIT: I can pull this from @Tacet’s video with permission of course)

The video I linked was unfortunately a Kerberos getting the devour.

lol, I just saw that after I edited my post above

Here’s another Tacet video where Great Maw had a 50% weekly buff. (For a crazy stat Maw)

Feel free to use this screenshot if you want. 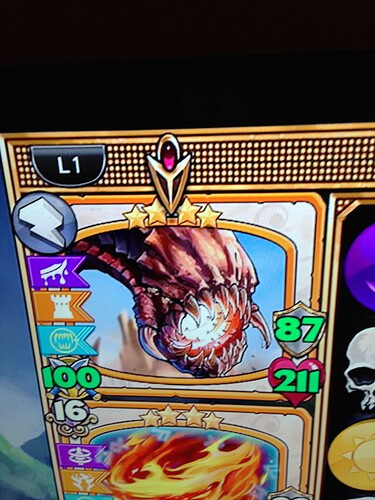 Message me if you want to sort something out in regards to getting them.

@efh313 Video with Elspeth using her spell on herself in two battles.
http://sendvid.com/bb8zjw5t

Recorded on PC, would you like it to be recorded on my phone? It wouldn’t have the cursor arrow.

I already finished the Sac Yourself video… BUT…

I may be editing it and if I do I will certainly look at using this vid in the new video!!