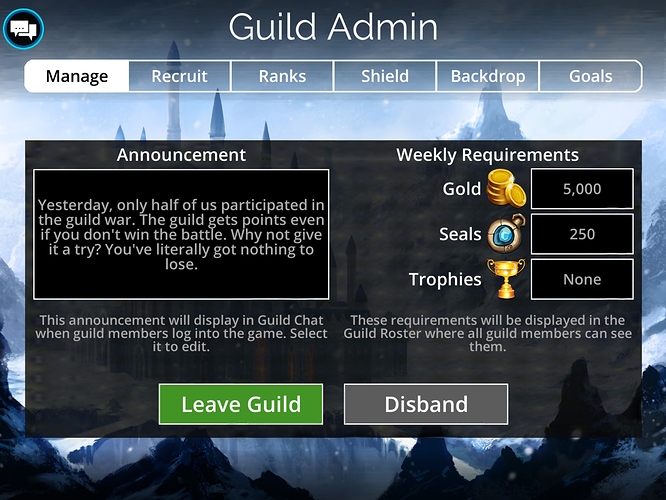 What you were expecting to happen, and what actually happened:
I went to the guild admin screen to change the announcement, and I cannot seem to exit. I believe there used to be a back arrow or something to get to the main guild screen. I had to restart the game to get out of it, and it didn’t save the new announcement. I am a Sentinel in my guild, so I have the proper permissions.

How often does this happen? When did it begin happening?
It just started today. I did the latest update yesterday, and this is the first time I’ve tried to access the admin screen since then.

Steps to make it happen again
I clicked on Guild at the bottom of the screen, the main guild screen opened, I clicked on Guild Admin, entered a new announcement, and then realized there wasn’t any way to exit that screen.

I asked the guild master to try it, but haven’t hear back from her yet.

FYI, I just tried it on my iPhone and I see the back arrow. Weird.

The "Guild Admin" section has no way out Support

So this has been fixed but it requires a client update so that means we won’t be able to get the fix to you until 4.5

it affects any device which uses a 4:3 screen resolution so only tablets. On Android you can use your device’s back button to go back. On iPad you must exit the game, thankfully it doesn’t take long to do that and re-enter on iOS although I get that it’s annoying and inconvenient. I’ll add this to the known issues list. Sorry everyone.

Same thing happened to me on steam, no back arrow. I tried android and it would work ok.

It’s a known issue that’s been stated as unfixable until 4.5. So don’t try to admin your guild for like, the next 4 months.