I think it would be better if we can pick troops from a screen like this. 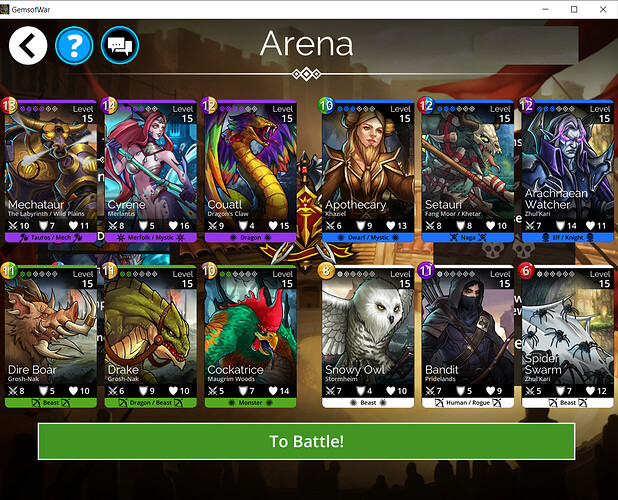 This would be great. Sometimes there are good team combos but because the selection order is forced, I missed it. The other day I had to reroll ten times before getting a viable team.

This would be great if this was implemented.

What good is recruiting a Mana Converter that eg changes all red gems to blue, when you’ve not got a blue troop yet and the last three you recruit could all be yellow or purple…

I think I agree.

I can imagine a developer possibly thinking that this would undermine the challenge of a typical drafting process in which you don’t know what’s coming up and have to hedge your bets, but my counters would be:

Also there should be “1000 gold REROLL” option after the “Free Reroll”.
It’s so annoying to click “retire” + “yes” + “continue” + “games” + “arena” every time. Especially on arena vault weekends.

I thought, after 1000 gold there will be another free reroll.

Interesting idea, but that does give an advantage to Advanced/ Endgame players who could just keep paying for Rerolls until they get offered a good team…

There realistically just needs to be the current baby league (reminds me a lot of Pokémon Stadium) with the lower entry fee, and then a higher reward version with a higher, possibly token-ised entry fee (say 21 a week, more with… Gems?).

In the latter, you just have to deal with the Troops you get, because you don’t want to waste your fee on say a reroll.

1,000 Gold is nothing or next-to- for anyone in the early mid-game or beyond, also (e.g. Kingdom upgrades quickly ramp up to 20-40k, and one roll of Arena isn’t really that big a dent/proportion, even if you wouldn’t go crazy with 1k rerolls).

Interesting idea, but that does give an advantage to Advanced/ Endgame players who could just keep paying for Rerolls until they get offered a good team…

I do it anyway though. Why not remove the annoying UI part of retiring and being tossed back to the world map?