This shit is so rigged that even a carnival game of “chance” is looking more legit.

Perhaps the devs can make arena more appealing by not telling the code to mana block the other troops. Or, give troops that can’t boost because only 1 troop out of 16 offers blue Mana. While…7 troops are red. Not a coincidence at all.

Maybe it was some kind of random autobalance, cause Baldr with a couple of other blue-mana troops will be a bit… well, you know))

I think it would be less aggravating if you could see all 12 troops from the start and figure out how you might try and synergize things or at least select a team that doesn’t mana-block itself eight ways from Sunday.

But reading comments in other threads on these forums? I get the sense that a lot of people don’t bother with the Arena at all, or that they only do so when a campaign task requires it and they don’t feel like re-rolling it. So maybe it isn’t played enough for the developers to consider adjustments as a very high priority, even with the odd Arena weekend.

And weren’t we told back around the first Arena weekend that there would be special “rules” and “changes” for those weekends, such as certain additional troops being available and all that? And didn’t the first Arena weekend actually include one of the seasonal imps as a “guaranteed” troop? (Or am I mis-remembering that stuff?)

I haven’t done a single arena in maybe 6 months and I’m happier for it. Yes I might miss out on a few Imperial deeds but that’s a price I’m willing to pay.

I really like the idea of showing you all 4 troop grouped selections so you can maybe pick your choices a little better out of the 12 random troops it offers. It wouldn’t be a bad change and even if you get bad offers in all 4 groups at least you could avoid being mana blocked or having mana generators that produce a colour none of your troops even use. Sometimes for one group or more that is all you have offered and unless you already have a troop of that colour from a previous rarity picked then it is super random if it will even be useful. Sometimes even then all of them would be useless but at least you’d have a small amount of control. 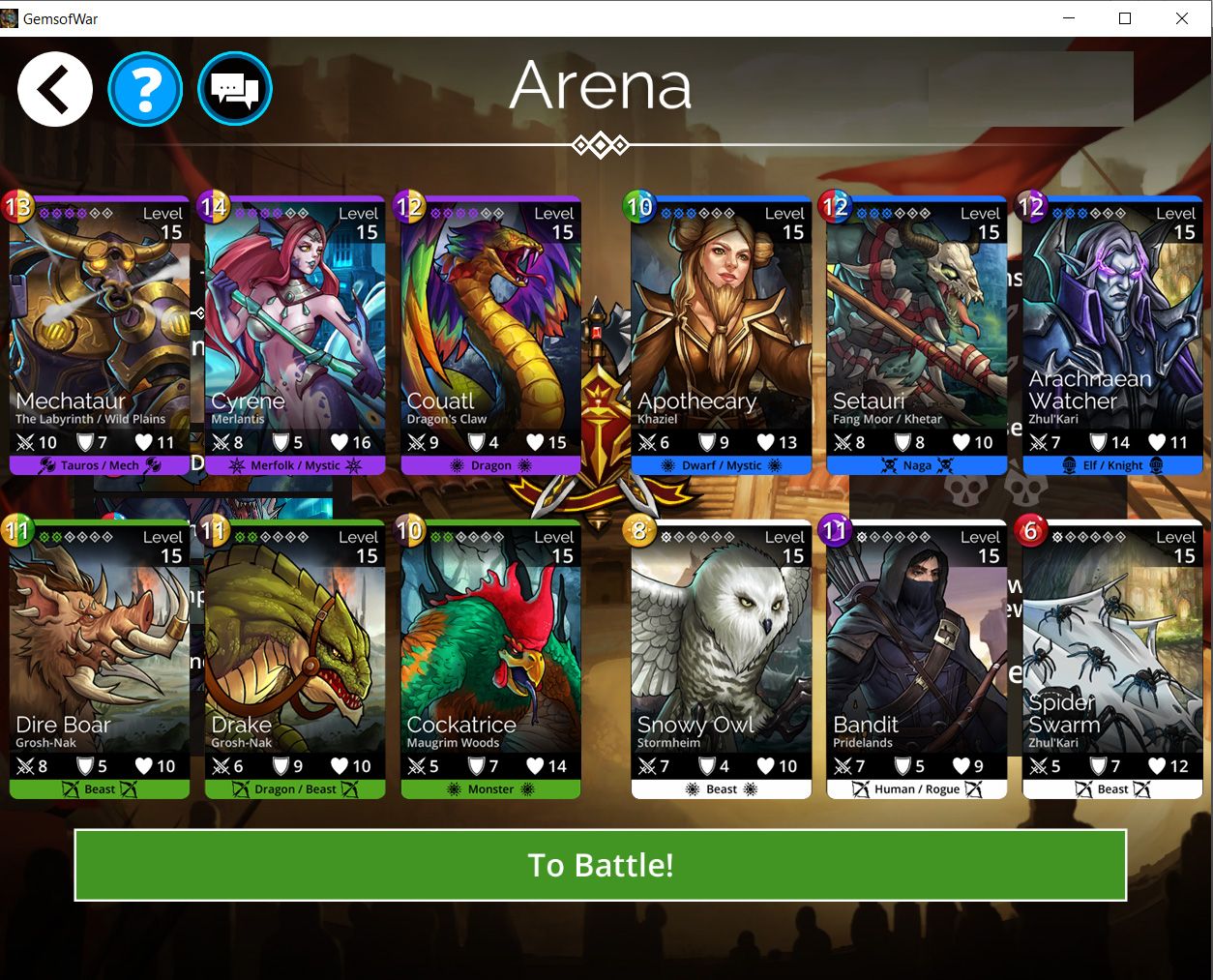 So no one can mention any issues with the arena without it being lumped together as the same thought?

I highly doubt the devs are tracking who said what when. And my original gripe with the arena redesign was the consistent Mana blocking. Now I’m seeing it evolve to be even more worse rather than better.

In this case (theory of course) the code is told not to give blue troops as an option because the game knows that I’m highly likely to select Kratos as my troop.

I 100% believe algorithm’s exist that track who the most selected troops are in an arena and the game tries to ruin any fun by making decisions based on the data.

This is no human doing it. But AI, which is the lead director of Gems of War for almost a year now. (thanks PQ3).

None of these thoughts of mine haven’t been said other places on the forums so this is more a consolidated or a “bumping” of my thoughts. Much like the OP is. At the same time, plenty of original points get ignored just as well by the devs. Just look under bug reports to see a vast evidence of that.

It’s been 7 updates since I reported the latest UI issue causing explore runs (and rarely arena runs) to crash on my phone. But because not enough people are bitching about it. The devs are taking their sweet ass time to fix it. That… And the AI can’t fix their own bugs, which definitely throws wrenches in the plans of Gems of War being 100% automated.

Played by bots. Programmed by bots. A bot utopia. (if only bots could earn and spend money. It’d be perfect.)

In the beta round when we tested the arena update we provided something exactly like your suggestion but it was never taken up. Perhaps its something they are willing to look at again

Well there’s another Beta application now. Up for it?

So assuming this is all working as intended…
The current solution is simple, use the hidden “feature” and

The solution of just seeing all options OR being able to go back and change selections are clearly better, but right now, hidden “feature” is all we got

For anyone who didn’t know about it - Enjoy!