Why we don't have Cosmetic Pets weekend?

We have lots of cosmetic pets that need to be upgraded, and some we don’t even have.
It would be a great opportunity to catch up, upgrade these pets, or get the missing ones.

Some of these pets were introduced in the game for a special event, such as the War Corgi to celebrate International Dog Day back in 2018. I missed this pet due to international travel.

I second that. Over the years I missed a lot of those cosmetic pets and even those I have are at the lowest rarity. Even though I’m playing almost every day for 6 years now. Except when I was banned for 3 days. But then I missed another special pet.

So please more pet events or at least the option to craft them.

The only problem with running cosmetic pets on weekends is that it prevents all other pets from being earned on the two days of the week that are the only days many people have time to grind for pet gnomes. If they could figure out a way to run the cosmetic 24h, and allow random pets after doing the 24h event in the same day, it would be less problematic.

I think a better way to address it might be to introduce them to the pool of daily offers after a long period of timed exclusivity. Maybe a year, allowing the next pet for that annual day to be introduced.

We have pet orbs now to help with the leveling, but that doesn’t help those that have no copies at all. Blacking out whole days of potential random pets to get outdated cosmetic pets, would cause more outrage than not, imo. People already don’t like it when a Saturday rerun happens now.

We just need them added to the random pool.

We just need them added to the random pool.

Or we could have two pools, one for regular pets and one for cosmetic pets. Switch to the cosmetic pet pool on special days.

My pets are maxed.

Even before the new orbs were introduced…

The only thing that is a true point, it is a dumb situation if you haven’t even got one copy of a certain cosmetic pet because you didn’t play back then and simply had no chance to ever get at least one copy.

acts like the regular pet gnome, but unlocks a cosmetic pet rescue for 60min

but devs ignore the pet situation since years.

My suggestion would be to introduce crafting possibilities for all cosmetic pets in the soulforge.

acts like the regular pet gnome, but unlocks a cosmetic pet rescue for 60min

Yeah, I can see this going over real well with the people in these spaces. Considering the sheer number of cosmetic pests, the odds would be pretty damn high (and frequently increasing) that this would kick out a pest the player already has and maybe already has maxxed. Meaning they’d be spending all that money for unsatisfying returns, after which many of them would come here to complain about it.

My solution? Beyond the all-too-rare Cosmetic Pest Redux Saturdays that we have now? How about putting them into the Daily Deals pool the way ordinary pests show up there if that’s a block on kingdom progression? Even if they’re in there at a greatly increased cost (2x or 3x) as compared to the current paradigm as a way to “encourage” players to spend the Gems on release Wednesday or the cash on a campaign pass?

With the new orbs around it’s at least not impossible anymore to level pets up. But many of us missed one or the other totally. These should either be available in daily offers, Soulforge or on Reborn Events. Maybe Campaign Passes. There’s so many options, all of them probably have people complaining. But STILL one way or the other should be implemented to catch up on missed pets.

Costemic pets are USELESS. Either get rid of them completely or, change it to where they can actually give a boost to some of the weaker Troops.

I guess you all miss out the meaning of cosmetic, there are totally cosmetic, something to shine out if you played back then, but just a show, nothing more. No bonuses and no kingdok blockers, you need 4 pets max for certain kingdom so the number of cosmetic that should be maxed so you won’t be blocked is limited, use the new orb. Beside that, its not meant to be perfect collection nor maxed out.

Some of us want a perfect collection though. Each pet maxed, each weapon maxed, each kingdom maxed, each troop maxed with 4 copies.

Hayabusa is right pandagram
It might be 4 pets at the moment to max kingdom.

But every legends reborn gives us 4 more troops.
So for instance. Zhulkari will be a higher level very soon and will probs need more than 4 pets.

Gow never stops or ends, so will always be getting higher kingdom levels obviously.

Plus you guys are funny.
Yes cosmetic pets are useless.
But so is some armours.
Or what your character looks like.

Some of you guys need to remember it’s actually a game.
To play and have fun.

Every game ever made has useless things.
RPGs with NPC’s that don’t talk.
FIFA with a fake crowd
Cod with containers that you can’t shoot or pick up.
Forza,grid,gran turismo with a crowd or tired behind walls.

I could go on for ever.

But every legends reborn gives us 4 more troops.

So, as far as pets for power levels are concerned, it will not be an unsurmountable problem for any foreseeable future.
It still would be nice, though, to get reruns (but never on vault weekends) of old cosmetic pets just for completionism sake, for people who were not there during original release.

There from kingdom pass
Not legends reborn

But my point is still valid, always new troops coming.

Solution to keep (mostly) everyone happy:

Cosmetic pet weekends yes (every week if you want) but you can also get more pet rescues once you have finished the first pet rescue during this period.

Same applies to the 24 hour pet rescue on Wednesday.

This would require some recoding of how they work though/devs will be resilient to this idea for other reasons too. We can dream though

So you found the troop spoilers page? Good job, congratulations!
Too bad you didn’t bother to look further or you might’ve found this as well - certainly looks like pets to me. 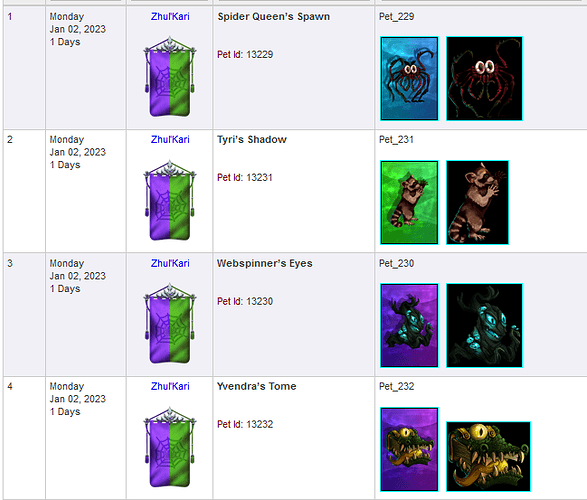 So the point indeed is valid - cosmetic pet reruns are nice, but no need to exaggerate kingdom power level requirement connection.