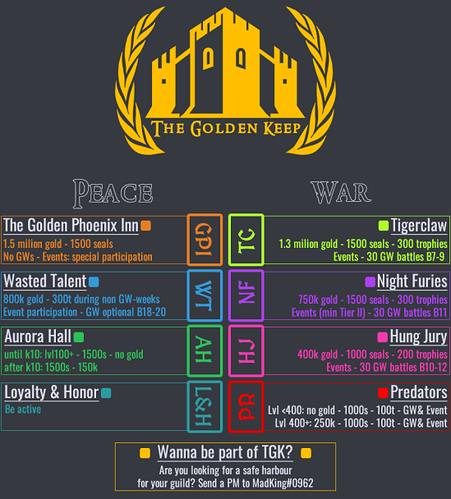 And Gaard let his gaze wander across the land, approving of what he saw. “This”, he summarized, “is what balance looks like.”
His Champion, standing right next to him, frowned ever so slightly, a gesture not about to go unnoticed.
“You don’t seem to agree?”, Gaard observed, making it sounds like a question rather than a fact.
“Well…”, his Champion reluctantly let out, “Zaejin over there, it’s mostly smelly goblins that prey on unwary travelers…”
“Yes”, Gaard acknowledged, “there have to be places where the lazy live off the hard-working, thinking only of their own personal gain.”
“And there’s Karakoth”, his Champion went on, “a bunch of raving lunatics that only babble incoherent stuff.”
“Yes”, Gaard acknowledged, “there have to be places where every day is madness, without anybody understanding what is going on.”
“And what about Khetar?” his Champion insisted. “it’s just a pile of sand and ruins, with the occasional undead thrown in!”
“Yes”, Gaard acknowledged, “there have to be places where nothing gets done at all, no matter how much everything falls apart around you.”
“So, how is this supposed to be balanced?” his Champion asked, disbelief lacing every word.
“You’ve missed one important detail”, Gaard explained, pointing towards a small thriving community nestled into a nearby scenic valley. “A wise leader and diligent followers happily working together each day on a mutual goal that benefits them all. They go by the name Tigerclaw.”
“But Gaard…”, his Champion wondered, still struggling with the revelation. “That’s an awful lot of positives, doesn’t this tilt the balance too far into the other direction?”
“There’s a catch”, Gaard admitted with a smile, “population is restricted to 30”.

Interested in joining? The Golden Keep family also has room for players at a wide range of other activity levels. Feel free to visit our Discord server at The Golden Keep.

Hello. my name is Boyan. I was in the 24th ranked guild, before we disbanded. I had a brake and now I am back in the game. I see you have more free spots. I am level 1254 and I would like to join if possible.

That lore is better than any campaign story, i wept.

That lore is better than any campaign story, i wept.

Like a guild member once put it: “There’s more lore on my shampoo bottle than in those campaign texts!”

One spot available again. Big room with multiple cooking opportunities, used to be the guild forge, got repurposed due to lack of cursed gnomes.

One spot available again. Room number 31, it used to be 13 but got mixed up in a scoring issue.

One spot opening up this weekend. Accommodation is in the Twin Tower above the Transmutation chamber, please make sure to only use the certified storage chests, otherwise stored items may spontaneously transmogrify.