This Battle may have already Finished Message 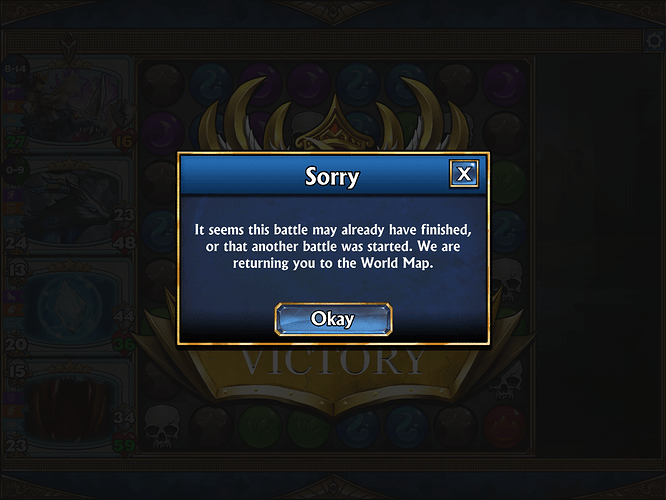 We’re doing some investigation into why is occurring to players. If you have seen this message recently, could you please answer the following questions for us?

Thank you for your help!

Edit:
Oh yeah: I was fighting a long match against maw/bonedragon/whatever/mercy. At the end just my valkyrie and enemies mercy were up. I was one skullmatch away from killing him. Was about 8 minutes that match. Very rarely I fight longer than 2 minutes on a match. After that match the hourly gold bonus blinked up on my home kingdom. Maybe this reset/disturbed the game state.

In both cases after clicking “Okay” I got booted to the main map. The first time - my match got counted as an attack loss in my pvp log (so lost pvp points instead of gaining them), can’t say if I got the match-rewards (i.e. gold/souls), but doubt it. So the game treated it like it would a Disconnect in the middle of the match (even though it was the reward screen-dc).
The second time, the match counted as neither loss or win, the game just “rollbacked” to the state from before the match (there was no trace of the match in my pvp log, and the person I just beat was right there on the 3-trophy slot in ranked pvp, just like before the match). I’m not sure if it’s possible to roll the sameperson as an opponent two times in a row in such short period of time (even it it is, the chance has to be low?), so it did feel like a rollback.

e/ when answering the 3rd question, do specify at which point did it happen (was it same as me, at the end? or mid-battle?) it probably would be helpful

else you just duplicate the first question answer for no reason.

One interesting fact, which may help, is that battle was resolved as loss the moment it started ( battle log said loss 4 mins ago when I did check it right after loss )

@Jainus ? I think he said he had three in a row. I’ll let him post here.

I saw this once, two days ago. I was playing ranked pvp on Android phone. Can’t remember other details, sorry.

additonal info:
I restarted the game immediately after the error. It didn’t count the battle as a win or loss. I don’t think it gave me any rewards. After restarting, I was able to fight the same opponent again without any issues.

However, I’m pretty sure the reason why I saw this message is because my WiFi connection was cut off during the battle and it’s not on a data plan so that was it’s only Internet connection. So when I logged back in, I got the message which I thought was understandable because after the battle finished, the game couldn’t communicate back to the server and was “left in limbo”, so to speak.

Speaking of “when”, not just monday, just got it again: 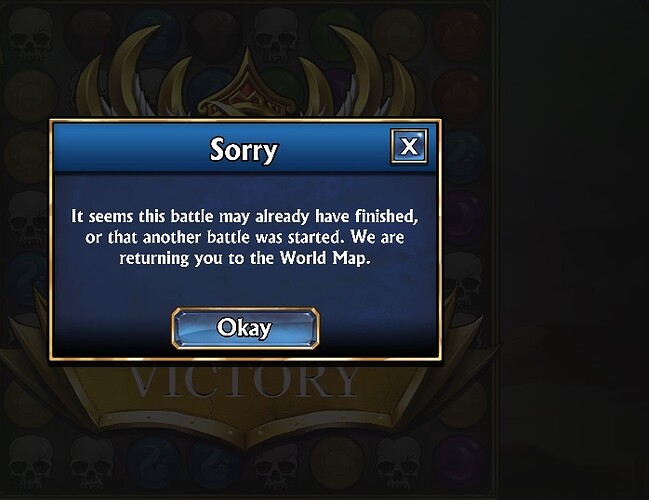 The match “never existed” after it kicked me out. (no trace in the pvp log)

since its steam - i am not getting gold or doing anything but the battle.

i have seen it on my android tablet, but when on my tablet - i am away from my computer which means that i dont have steam running or gow.

this summer, i was riding in the car through nevada and utah, usa, and we had no cell reception for a couple of hours. got the retry error, was able to get rewards from those battles when we finally got reception.