They forgot the kingdoms

but the rest is workig prettty good for me

New kingdoms will come out in the future.

New kingdoms will come out in the future.

I’m glad we finally got the update, extremely disappointed it didn’t include any new kingdoms. Last time we got two, and the preview of the update even showed a screenshot of the map with the kingdoms. Oh well.

I love it, plague and death finaly worth it

Look like the AI customisation is working, i saw AI matching color gem when there is skulls on the board

So when every 12 tasks are done, are we supposed to get legendary task like pc/mobile?

so no mythic for us this month?!

I suspect they’ll put Abynissia and maybe Gard’s Avatar in chests as soon as they release some additional troops - probably at the next weekly rollover (Sunday/Monday).

It looks like they pushed the update the minute it was available and will sort out how they catch the troops up starting next week.

I hope so buddy

I’ve been farming for gards avatar for weeks!
Anyone know when bombot is in gold chests? Got a thousand ready to go. Next week? I think that’s 4 weeks since the event.

Anyone know when bombot is in gold chests? Got a thousand ready to go. Next week? I think that’s 4 weeks since the event.

You and me both. I accidentally Ascended my extra copies, now I only have one.

That little Mech is awesome.

Aye, I deliberately bought extra so I could have two epics. I only traited them once, for something that blows itself up it a waste of stones really. Imo anyway.

Here’s what we got for our legendary task completion. Most certainly not the best obviously, but every little helps! 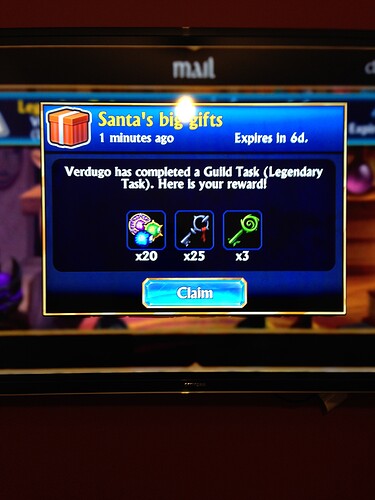 What stones were they?