Stone aegis weapon trait Explode a brown gem is not firing upon weapon cast. No stun, web, or other status is affecting weapon to prevent trait. It simply doesn’t happen.

Looks like stone aegis used to have exlode 1 brown gem trait, but they changed it to dwarven: all brown allies gain 2 mana 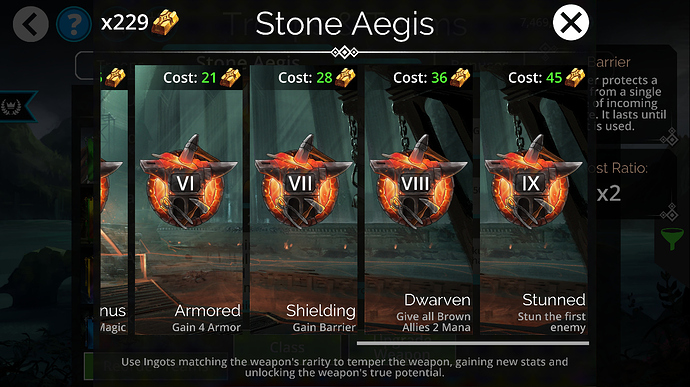 In 4.2. we changed all Explosion Traits, so this would have included the Stone of Aegis’ 8th Trait as Noob mentioned.

Let me know if that is not the issue and I am missing something!

Please update the description on Xbox. I can’t verify for others, but my account still lists the original affect.

Oh dear, that definitely shouldn’t be happening! To you have any other Weapons with the Dwarven Affix (e.g many from Khaziel have it), or does this happen with other Explosion Affixes? Could you please kindly share a screenshot?

Thank you for the response. The trait is working as you stated per change, just the description didn’t match. At least it explains why it didn’t fire the former trait as listed. Good enough answer for me.