Oh, some equalities to the Maya civilization. So cooool!

I am sad to see the mythic dragon nerf. When I thought he might be OP I wasn’t calling for a nerf, it was more of a “let’s wait and see how it turns out” not a “nerf immediately”. I was looking forward to that mythic how it was.

The reason we changed Elemaugrim was becuase he was doing too much stuff- He could aoe burn, aoe dmg, and create gems boosted by burning (so he would always be getting the boost from burning)… plus the gems he created could power himself back up. We want players to build a team around him to help him, and he was too much of a one dragon army.

We are still working on his design and balance so he may change a few times before he releases.

to:
Death Mark all enemies when I die

I can see the rage from team wipes from killing the hero with 0 chance of cleansing it.

Hmm I wonder how that works with sacrifice? Does sacrifice give an extra 16 magic if deathknight is the last troop?

0 chance of cleansing it.

That’s incorrect, though. Since the enemy Death Knight hero will usually be killed during your turn (unless killed by traits/status effect), deathmark will not activate until your turn ends and starts again. If you’re able to kill him and keep the turn (i.e skull spam, or goblins/Mab spell etc.), you should have the chance to use a cleanse spell. Another strategy is to simply kill the enemy hero last.

At the very least he doesn’t seem as bad as Death, and Death exists for a while now, so I don’t see a reason for any new rage to start.

In most instances dealing a killing blow doesn’t give you an extra turn. And not all teams can do both at the same time.

You can deny Death mana, either by taking it all or draining him. But there is no way to get around not killing a troop. And I suspect it will suffer from the same problem as the dragon soul and inferno king, in that traits are reset upon death and triggered. So stunning it would not work.

Killing hero last, or gaining an extra turn while killing him AND casting a team cleanse is the only way I can see to not let RNG decide who wins.

You can deny Death mana, either by taking it all or draining him.

Denying Death mana is extremely hard, since he takes 3 colors. Draining him is a viable strategy, but requires specific troops so not easier to preform compared to the strategies I suggested against Death Knight.

And I suspect it will suffer from the same problem as the dragon soul and inferno king, in that traits are reset upon death and triggered. So stunning it would not work.

And here I was sure that bug was fixed…? Is there recent evidence that bug still exists?

Killing hero last, or gaining an extra turn while killing him AND casting a team cleanse is the only way I can see to not let RNG decide who wins.

You can just kill them all in the same turn. there are many popular teams that can do it. AOE damage teams, looping teams, etc.

There aren’t any dragons that easily burn

I guess with the most recent change (which admittedly I had forgotten about) I could see this point.

Personally I dislike sheggra and I haven’t ever fancied skull teams. So I don’t consider that viable for myself.

It has been fixed, so ignore that. Its a trait that activates once and on death. Doesnt have any benefit to the corse of battle. But if someone wants to complain about it, they will do it anyway.

Oh when was that fixed?

I can see the rage from team wipes from killing the hero with 0 chance of cleansing it.

there is hope that with new game engine (sometime later) the bug about not-stunnable on-death traits will be fixed and we can just stun it.

edit: nvm, didnt realise it is fixed… really is it?

Yep it is. If IK or TDS were stunned before you kill them, they wont respawn. I dont know does it work correctly if you simultaneously kill and stun them (example killing them with EK) but i think that should work too.

It is a really weak unique trait now, and bug or not it absolutely should fire on death even if the Hero is stunned, else it is just aweful.
If i take my fights using Death as a reference, this trait will do absolutely nothing in a good portion of the fights, and even if one or two of its DMs result in a kill along the line, it happens when you are already behind in the game, with your Hero being dead and all.

most of traits if stunned wont work, so this one shouldnt be an exception

The little screenshot I have seems to be getting old: 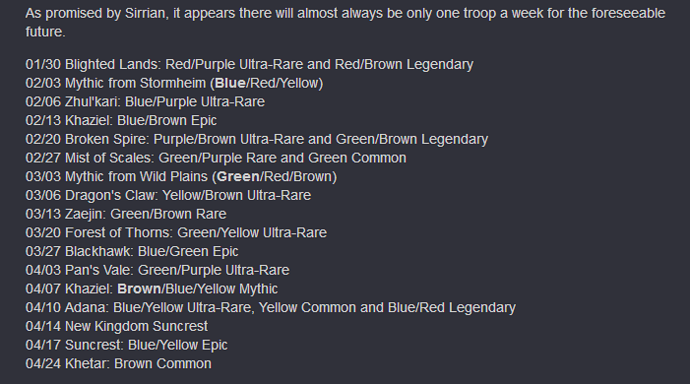 Does anyone know if there’s a new spoiler list for kingdoms? I’m mainly concerned with Dragon Claw kingdom but am curious about the others as well.

this is all i know:

It’s about the right time for a new Arcane calendar thread. This time I’m trying a new format, splitting out the Arcanes for glory from the new troops that you might want to save up Arcanes for (new Kingdoms, Event Legendaries, and Mythics). Although available spoilers include July, the dates seem even more unreliable, so I’m only running this post to the end of June (edit: Now updated to July). Arcanes for Glory Calendar 04-03 Ultra-Rare from Pan’s Vale is Green/Purple (Arcane Venom) 04-10…

I wasn’t comparing them, i was just using it as a reference to judge on how often a Deathmark to all enemies results in… well absolutely nothing happening at all which is not so rare.

I also didn’t try to say this trait should be an ecxeption mechanically to status effects, what i was aiming for was that the Devs should just make sure that this unique trait can’t just be out-stunned, by either add Thick Head to this class or by changing the unique trait in a way that makes sure it fires on death no matter what.

I get that the trait was bonkers before the change and i am happy they changed it, they just went overboard to hold on to the idea of the trait having something to do with Deathmarks making it a really unexciting and weak trait, with a chance to even do absolutely nothing …literally(even without having to stun it).