I don’t see a problem with a company catering to a clientele that gives them money. If anything I think that makes business sense.

I seem to recall Legendary:Game of Heroes not excactly doing well with that approach. I haven’t followed the whole fiasco, I’d hate so see this repeated here though.

505’s plans may not be perfect but I think they are competent to make adjustments as they go along.

I sure hope their business plans are handled more competently than their development plans, two years of not fixing critical design bugs despite repeated promises doesn’t bode well.

That’s interesting because I don’t think I’ve ever continued to play a game I didn’t like just because of the time I’ve invested. Usually if I’m not having fun anymore I just stop. I’m one of those guys that are just very indifferent to games. I play what I like and I don’t bother with anything that doesn’t give me enjoyment.

Other games have taken that road and died pretty fast.

… and other ones did it and survive thanks to that.

And they have repeatedly failed on #2. So, so , so many offers are a ripoff, that I don’t even bother to look.

No, because it feels like it’s being forced on me. Maybe I can get those things without paying in a reasonable amount of time. Or maybe I wont see them till next year.

From a guild leader perspective, new updates are the most feared things in this game. This one seems to be very dangerous.

Just looking at elite plus I would make it where you can choose between that orange Orb no end gamer will want and maybe something like 4 gem gifts for guild mates and a pet bait to sweeten the deal. New players would like the orange Orb but all other players Have 100’s of them. The clan orb is ok though. The other option would be to make that orange Orb gift able

and is this a massive update 5.0?
honestly it’s rude don’t shit again so that you can get money out of people + now you don’t have to play the game but work in it because of numerous events, the game should relax and it doesn’t become the second work
I hope that before the release of the update, the developers will take this into account

So the devs knew this would bring up negative discussions ahead of time lol. What an interesting game design. If they knew it could have been mitigated, then why not do something about it before releasing it to negative backlash.

For me, I’m disappointed in how low the payout is for the free track. At the reward amount it is currently, the devs are either trying to guilt people into getting the elite pass (and only using the elite pass+ to make the elite pass look good) or essentially waste people’s time for some very meager resources.

Does that reward track even make sense? You might end up spending more resources overall to get back what they’re offering depending on the week.

The problem is that stat bonuses are also involved, so people are mostly expected to do the free path, even if the time spent isn’t worth what’s being offered.

This is coming from someone who was planning to get the elite pass before any of this was announced anyways.

I skipped a bunch, will end up reading it later, but wanted to reply to the F2P players aspect.

Im a ViP 4. This is purely all from steam bundles. 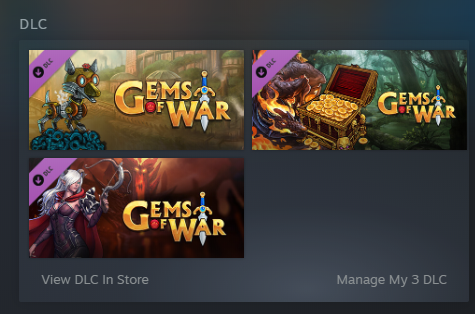 I havent bought gems, or spent money for armor or anything else. I have paid a few $ to get a DLC during a sale and thats it. I like to think Im a f2p player despite that as I never paid to get ahead or anything.

In saying that, I have a complete account really. Im in 1 of the top guilds in B1 for GW. I have Zuul, about 50% of the way through a 2nd 1 atm, I have all troops at mythic and 20. I have all but 3 weapons, all which are max upgraded outside of Doomed weapons where most are maxed there too. I have 5 classes left to level:

and almost all pets leveled outside of cosmetic.

This game is entirely f2p though. Yes, some things are easier with cash, but thats the way its designed, it just takes more time and effort instead, which is the exact trade off it should be.

I think that the pass, Elite that is, may be worth the cost, but that depends on the rewards on release, and I can not stress this enough, they need to be worth the cost, or people will not buy in in future campaigns, and it is something we said mutliple times in the Beta.

At the end of the day, everything in this game can currently be achieved by free players with more time and effort. This mythic being added to the elite rewards falls into the time category and thats it. Its not a pay wall, its simply a pay to get faster. And if you get an Elite+ you can get it even faster again.

It seems the dreadful rewards and pay to win nature of campaigns are just to distract us from the fact there is no new content in 5.0. They just took the class event, put a meaningless map feature on it and they are making us do it for 10 weeks in a row. They are also putting the weekly task feature back in, that they removed a year ago, because it was a tedious chore.

I would much rather they tweek the existing content that is badly need of polish, but they can’t sell that to us for $24.99.

This is the Windows Vista of patches.

I’m not surprised the game has reached the point of paying to win, I really wouldn’t be shocked if there are quite a lot of people quit because of this. This patch certainly sounds like a downgrade rather than an update.

Hopefully they make a bunch of money so they can actually hire someone to go in and fix all the bugs.

Sick of the constant problems and inconsistencies.

Or they can just get rid of guild wars so I can quit.

Gawd!, I try to stay off the boards but you touched on a subject that’s dear to me. The phenomena you’re describing is called escalation of commitment. This phenomena occurs when a situation demands valuable resources (in this case time and/or money) and your past behaviour has not led to the situation meeting your expectations (e.g., not enjoying the game like you used to). At this point you need to make a decision: pursue the endeavour (keep on playing) or throw in the towel so as not to continue expending the aforementioned resources. Choosing to continue requires you to rationalize the decision to continue spending time and money on something that is not making you happy.

Their are several theories explaining why we might make these, arguably illogical, decisions: self-justification and social-identity theories could apply in this situation. But that’s another show.

Are you happy investing time and money in this game any longer? The psych major in me will tell you that it is ok to walk away; the veteran in me understands how hard it is to walk away. Especially when you can remember a time that the game was bringing you joy. Whatever you ultimately decide, do your best not to second-guess yourself and remember, it’s just a game!

Cheers! and thanks for giving me an opportunity to nerd out a little.

Please keep up the discussion, I’ve been pulling key points from it.

Just to answer what was asked earlier, any mythics or weapons released with the Elite Pass will be available for crafting for the same resource costs as usual. They won’t be more expensive to craft.

WHEN will the new troop be in the forge? The same day as the p2w people get it, or 6 months later?

Given the Will of Nysha and Pharos Ra rotations, could the campaign mythic be a separate slot like zuul or xathenos for a couple weeks in the following campaign before entering the normal rotation?

I had a question about this actually.

It used to be that new mythics released during a soul forge cycle had to wait until the start of the new cycle before they are brought into the soul forge cycle.
That seems to be the case still, but sometimes they are brought into the soul forge a month later just as you commented.
Are there multiple people doing this that could explain the different behavior? Or is it one system automatically doing it so there shouldn’t be any inconsistencies?

I would expect the mythic to be eligible for mythic rotation 4 weeks after it’s campaign ended.
Start of campaign obviously would make no sense since it could hit soul forge before campaign ended.