To be fair to the devs. Would you announce a Mythic troop that 90% of Epic Troops are better than?

Would you announce a Mythic troop that 90% of Epic Troops are better than?

That would imply they actually know how bad this troops is. Maybe they just wanted to avoid another thread where players ask why Hawthorn still isn’t in chests as announced.

You remember when the mythic announcements in-game had a bit of flavour and lore to them?

this mythic got a buff and is no longer an F tier troop…still not a great troop but it is solid now. 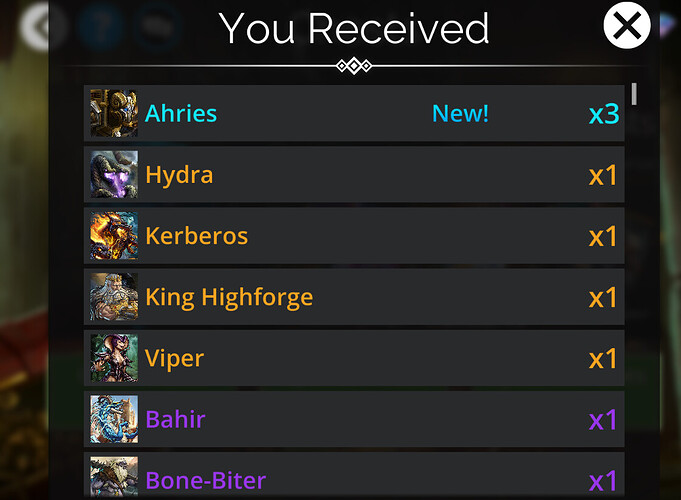 Oh, uh, gee, thanks! Not sure when I would ever use 3x copies of this troop, let alone 1, but okay…

I opened a bunch of chests and received 2 Ahries at once. I then went to my troop list to trait but Ahries wasn’t there. I wonder if getting 2 at once confused the game and somehow cancelled the acquisition?

Did you have any filters on?

Not initially. I then used the unowned filter and found Ahries there. That’s why I feel getting 2 at once might have confused the program somehow.

Since I have a bunch of glory, I kept opening chests and just received one Ahres which stuck.

I got my copy without spending an egregious number of keys. Not that I ever plan on using him, but I suppose it’s nice that he dilutes the mythic pool in Khazier for when I run Explore 12 because Stonehammer can be annoying.

Of course, I also picked up my fourth copy of The Wild Queen this week while spending Event Keys looking for Pan. Who I have no copies of, and who is now blocking me from kingdom star progression in Pan’s Vale.

But that’s probably the fortune I expect from this game.

That’s rough, I really like Pan. Nothing like a kick in the pants by GoW taunting you with mythics you don’t have yet. I have one or two that I’ve been trying to get for years now that are just damn elusive no matter how I plan with keys.

Hope you get a lucky pull or Pan turns up again in the Forge soon when you’ve got the diamonds.

Finally just posted it on the news page just now.

Hope you get a lucky pull or Pan turns up again in the Forge soon when you’ve got the diamonds.

A kick in the pants getting the fourth copy of one mythic instead of a first copy of the other? Sure.

But Pan isn’t my highest priority at the moment; I’ve already passed him up once this Soulforge cycle even though I’m sitting on close to 6000 diamonds (once Gem Shards are converted). I’m actually waiting on The Archduke for the same reason – kingdom stars, specifically the task that obliges me to have 2 mythics from the kingdom.

By the time Pan rolls around in the next cycle, I’ll probably have the diamonds for him anyhow. Which would make the whole discussion moot.

but it is solid now.

imo its average at best. Got no plans for it…

The recent buff raised Ahries from F-tier to D-tier IMO, but I still don’t foresee myself ever using him.

I like it, actually! I’ve been using it in the Umbral Nexus FA, and it’s a lot of fun, since it’s fast and different.

You can use Elementalist class for the stun, instead of Obsidius, and if you don’t have the Writhing Staff, you can use Rope Dart.

It works really well with Megavore - and especially well in this Ele team. I havent found anything it cant beat yet - yes I’m looking at you Rope Dart, Towers, Life & Death (with Arach etc) Zuul, Goblind, Wyrms (Megavore on top if Webspinner) Queen B etc etc etc
I think it is a reasonable alternative to Zuul for those who do not have him. 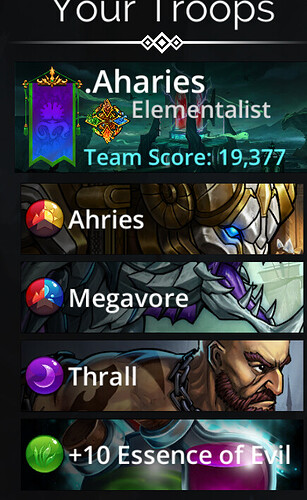 That fight lasted way, way too long. Two minutes for an E12 is absurd.