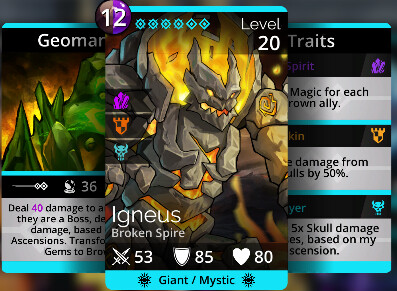 Typically when doing explore modes you expect to eventually see all troops from a kingdom appear. After doing hundreds of broken spire explore modes of 5 battles each in my hunt for medals and maybe a Hoard Mimic I have yet to see Igneus appear even once. He appears to not be in the possible troops selected when the enemy team is populated.

Go to Broken Spire Do an explore mode or several hundred and look to see if Igneus ever appears and be shocked to find you will never once encounter him.

So if anyone is looking for a Zuul’Goth friendly kingdom I suggest running broken spire until it is fixed. There are a handful of fireproof troops that you should use Zuul’Goth to kill so your fireblade can rip through the rest.

It should be noted since I mentioned it not one person in my family of guilds has encountered him either. I challenge anyone to encounter him in explore 12 and if so post a screenshot lol

I’ll move to Broken Spire and test to help confirm.

I let Gary know about it a couple weeks back we did the math he figured I’d have to do about 1000 battles to be sure that something was in fact amiss and I was not just having bad luck but I have now exceeded that number lol there are a lot of chances to fight an epic troop doing 12 explores and after a few hundred battles of 5 matches each with 4 troops per battle and never encountering Igneus is beyond suspicious at this point. It would not be a high priority bug to fix and i was hesitant to even report it as it does benefit us to not have to worry about a troop that can one shot your Zuul lol

I’ve posted a link to this thread in the #bug-hunters channel on my community server so hopefully we can get a few more testers to help out. Your numbers certainly back up your theory

Fun Fact: Fortress Gate from Broken Spire is also MIA in Explore. It’s been YEARS since I’ve seen it. I noticed it when testing which kingdoms needed single or double Ironhawk teams to farm E1.
P.S.: Broken Spire is a two-Ironhawk E1 farm team.

hell man, thanks for the info. I’ll try it out when I’m doing medal runs.

I can only support @havok6669 here. When I started farming E12 with several Zuul teams in the beginning of 2021, one of the first things I had to do was “learn all Godslayers of every kingdom”. Obviously, it is a good idea to eliminate them first before they can kill Zuul and kingdoms like Darkstone or Pridelands with stealthy Godslayers are among the most “difficult” for a Zuul team. After some weeks I realized, that I was able to name every Godslayer from memory - except the one from Broken Spire.

I don´t have any data recorded, but I am 100% sure, that I haven´t seen Igneus for months and E12 is by far the mode I play the most, at least one hour per day, I would guess. It could even be, that I have never encountered Igneus in any explore run, but I am not completely sure about that. Therefore, I cannot tell, if it has disappeared with a certain event (maybe faction release, as @havok6669 suggests), or if it has never been present in Broken Spire explores.

Right now you cannot find Kelpie in Ghulvania - Immune to burning so its noticeable with a fireblade team.
But Kelpie does show up when the kingdom changes, most recently it was Swords Edge week I think. As soon as that featured week ended Kelpie wasn’t to be found since.
I know it doesn’t make much sense, but thats what I’ve observed.

Not that I’m complaining, but I’ve never encountered Drake Rider in Grosh-Nak explore either. Plenty of Drakes, but never the rider.

Now this week Kelpie is showing up regular.
With a +10% to Monster stats