Ghulvania is the best Kingdom to Explore, prove me wrong

This is by far the fastest and easiest kingdom to farm for medals using a Fireblade team.

Can you post what you currently consider to be the best endgame team for this? I recall that you posted several options a few weeks ago with pros and cons. Curious to hear what you think after sitting on it for awhile.

You forgot to add this to your pro list.

(I don’t think any kingdom is luckier than any other, but just funny to see this post on the same day as each other.)

Kurandara’s (and company) kits seem to have been made to really annihilate the efficiency of what was one of the fastest consistent Scorp variants from exploring Urskaya (Song of Doom from the epic alone now makes it one of the more obnoxious to explore with any variant when it pops up, and nearly every explore viable team becomes a lot riskier if it doesn’t cancel that storm before moving the board). So you are probably correct here… for now.

[Ghulvania is the best Kingdom to Explore, prove me wrong]

I’ve been enjoying Wild Plains on Explore 1 for Soul Farming for its general lower durability than normal.

But… for my own personal sake, I hope all of the spotlight stays on Ghulvania and doesn’t stray over to other good kingdoms lol.

I’ve been enjoying Wild Plains on Explore 1 for Soul Farming for its general lower durability than normal.

When soul farming E1 is there really a best kingdom? I usually do whitehelm but still one shot everything.

They’ll end up doing the same thing they did with Urskaya.

They’ll end up doing the same thing they did with Urskaya.

I just decided to delete my post for this reason. They’ve previous for screwing over any ingenuity…

I heard Urskaya is still the best kingdom to do explore on.

When soul farming E1 is there really a best kingdom? I usually do whitehelm but still one shot everything.

Sorta, but not really. I use Leprechaun in my soul farming team, so technically I do have to be mindful in the fringe cases where my Lep explosions leaves the AI with 4/5 gem matches (purple storm for me), and gets a cast of to stall the match. Damage is fine, but other things like Barrier, Life Gain etc can be a nuisance.

The teams I was using for soul farming relied on scatter damage, so sometimes the combined durability of the enemies left some of them alive with a tiny bit of life under the wrong situations (more of an issue with Imperial Jewel). Its been easier with Sacrificial Priest, but I still try not to take any risks. Same reason why I probably could Soul Farm on Explore 2, but choose not to for consistency purposes. 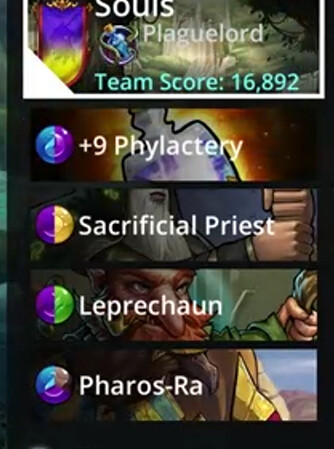 basically the same as what I use, though I run it with Thief for 7 damage to the last enemy on 4/5 match + purple storm to make it easier to fill Sac/Phylactery. I prefer Sac in 1st slot though, incase if Phylactery doesn’t fill, I can just cast to win and try again in another board. 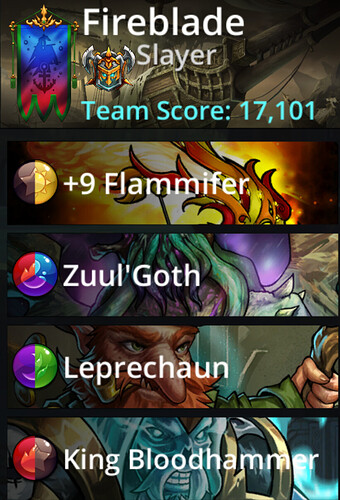 Here is my original post: Speed Explore: The Basics & Breakdown

I didn’t have the team above in that post, but I’ve been using Leprechaun + King Bloodhammer for a long time now and it’s my favorite set up. I much prefer it over Scylla (Bonestorm on 4+ match) or Infernus (burn all on 4 match) or the empowered skull creators (apophisis and fist of zorn).

The Doomstorm on enemy death triggers when you use Zuul’goth, so you don’t need to worry about a bonestorm immediately overwriting your firestorm when you use leprechaun. And King Bloodhammer can absolutely finish off the enemies in the event you lose your hero and Zuul’goth, whereas Scylla can’t.

funny enough, they don’t even have to do much. They’ll just put immunity to burning/faerie fire on the 4 faction troops that haven’t been released for Ghulvania yet…

Wouldn’t matter – I can always target the immune one with Zuul’goth. Can also target it with Flammifer and then let enraged skull damage kill it.

I use a meta team that includes Irongut + Essence of Evil, so these are the notes I made when I reviewed all the kingdoms:

Ghulvania - watch for: Undeads are immune to poison/disease; BUT YOU CAN EAT THEM ALL

Glacial Peaks - watch for: Freezing is a b; Can’t eat DOOM but everything else is lunch

Khetar - watch for: Faction troops cause bleeding; Undeads are immune to poison/disease; EAT EVERYTHING BUT War Sphinx

Mist of Scales - watch for: Snakes cause poison/bleeding; Bogstrider causes entangle; EAT EVERYTHING BUT Euryali and Plague Rat

Pridelands - watch for: EAT EVERYTHING BUT Behemoth

Silverglade - watch for: EAT EVERYTHING

Swords Edge - watch for: EAT EVERYTHING

Whitehelm - watch for: EAT EVERYTHING

In the end, I picked Whitehelm because when the game loads, it’s right in front of me. It’s also my “home” kingdom.