Thanks for this update Im not long here in the community but its real great how you and the team behind the screens helped me by my ticket and how the mods/admin team keep us up to date!
Much success with everything what is under construction and comes in the future to this great game!
A happy enthusiasm player

Hi everyone, time traveller from the future here - it’s the 5th of December 2022 where (or should that be ‘when’!) I am.

Unfortunately, we’ve just been told about another small and completely unforeseeable delay to update 6.4, but we’re all really excited to see it along with the forthcoming Halloween and anniversary stuff, and the new Hellcrag kingdom!

Anyway, they’ve just posted an updated version of the 2022 roadmap, which I’m sending back in time to share with you guys. Hope it makes it safely through the time continuum! 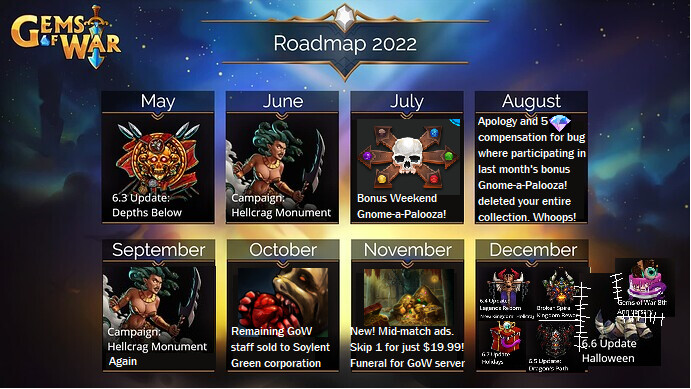 A bit of a late reply but thank you so much OminousGMan!! 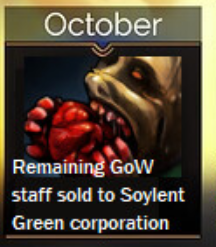 I knew this tasted a little funny!

Anyway, they’ve just posted an updated version of the 2022 roadmap, which I’m sending back in time to share with you guys. Hope it makes it safely through the time continuum!

Not trying to single you out. This goes for all feedback in regards to the update being “late”.

For 5+ years they wouldn’t tell us when an update was planned to be release due to fear of back lash when those dates weren’t meant.

I hope the devs are aware that 95% of the community understands that these dates are only a forecast and things can easily change.

If the devs listen and react to the negative feedback then they will rush updates that aren’t ready to adhere to their schedule. Or again, just keep that information to themselves so that updates can never be considered “late”.

After years of being unwilling to give an ETA for patches. This is a welcomed idea.

Just a friendly reminder of this idea. ↑

This could probably have been advertised earlier but even so, thanks for the update.

It was advertised earlier.

The roadmap & the updates to it are very much appreciated! Hang in there Devs!

Give ‘em some slack players.

Anyone have any thoughts on what the Broken Spire Kingdom Rework will involve in September? I wasn’t aware of anything that particularly needed re-working. Hopeful some kind of new Arena rework is part of that personally.

Anyone have any thoughts on what the Broken Spire Kingdom Rework will involve in September?

To me, the spoilers over at Taransworld suggest we’ll get a couple of new troops as part of that re-work. I suspect we’ll see spells modified/upgraded for a number of troops as well as we’ve occasionally (but not very often) seen in the past with other kingdoms.

I doubt we’ll get an Arena re-work. But I wouldn’t be surprised if we had a Legends Reborn event in Broken Spire as part of the “celebration”.

If they continue with the current order, Firerift should be the 2nd last. So ~32 other factions and then comes Firerift.
But hey, we are talkin about the Gems of War developer team. Everything could happen

There was also some evidence of Adana having a similar facelift with various troops as well, maybe after due to the queue of 4-5 Adana troops added all to Taran’s in a similar timeframe to the Broken Spire ones. However, that might just be making connections that aren’t there.

But if you wanted more in-lore crazy chicken shenanigan’s, looks like you won’t be let down!

By the way, I feel like after the World Quests section was added into the game a few updates ago and never mentioned again, maybe that’s the mechanism they’ll use to do some Kingdom update stuff? Checkov’s gun and all that.

By the way, I feel like after the World Quests section was added into the game a few updates ago and never mentioned again, maybe that’s the mechanism they’ll use to do some Kingdom update stuff?

World quests are basically the tutorials for game features, there are unlikely to be any new ones until they add something significant not available right away to level 1 players.

Is that what those were for? It makes sense why they’ve seemingly had no impact on my game then. It’s been a big question mark for me when those were going to become relevant.

In the last couple of weeks Daily Deals and Arena rewards have gone back to early game offers: common troops and ingots. I don’t need these anymore, but there are plenty of things I would spend gems on: pets, medals, class levels, writs, deeds, etc., I completed all the underworld factions around the time this started happening, so not sure if that caused some kind of reset. Will keep my fingers crossed that the offers go back to the way they were a couple of weeks ago. They were working pretty well before the change.

Welcome to the forums.

There have been issues with the Kingdom Helper deals for years once you reach a certain point the Kingdom progression, and we’ve been told that this is being worked on now. It’s being discussed in this topic:

Is there any chance to get the community involved in this in some way, at a point in time where the biggest blunders can still get averted? To give some examples: “We’ve improved the way daily offers work. In the past, an open task like upgrading a number of weapons triggered random ingot offers, possibly of a rarity you didn’t need. We’ve changed those to always offer bundles instead, in this case a number of ingots of each rarity. And we’ve even slashed the total cost a bit, you pay 10% le…

Btw since I upgraded all my weapons, ive got no ingot offers for the last month at least

You only get specific offerings, if one of your kingdoms power level tasks requires it.
So if no kingdom needs an unobtained amount of fully upgraded weapons, you won’t get any ingot offerings.
Similar to pet offerings. You will only get such pet offerings for kingdoms which currently ask for an amount of pets or an amount of pets at 20 related to the kingdom. So no pet offerings for kingdoms which aren’t at one of those certain power levels requiring a pet.
That’s also why you shouldn’t upgrade more then 3 pets of every kingdom to 20 until you have all copys of those you still wnat to have at 20. Only chance to get them otherwise is from pet rescues.