I’m changing my farming delve (from WC to CoT).
So 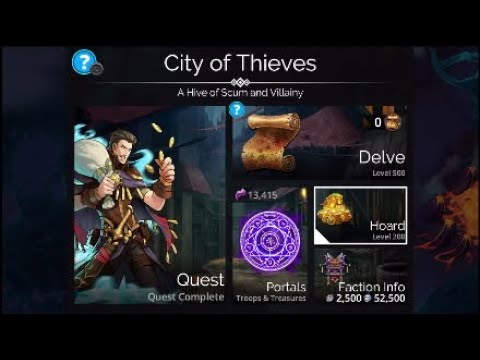 Yo my friends. here is a spreadsheet that i use (work in progress

It has alot of curiosity about factions in general.

With this spreadsheet you can compare things, prepare strategies, …

Very handy to see all the records in one place, wasn’t sure about the hoard levels on some of them. Thanks!

Good luck to all attempting and thanks to all those who did it before to help me out!

This is my basic guide for all factions. I only finish up to half of Hard section, so I have collect some data of the rest from here, so thank everyone for sharing! 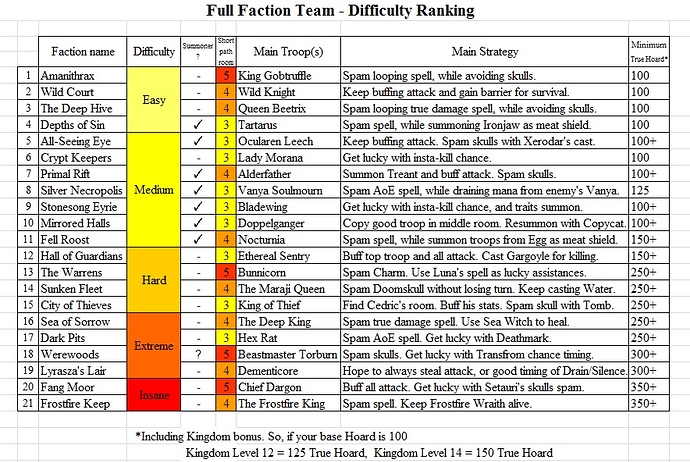 A nice list overall, but from my personal experience:

Hall of Guardian is on hard, because it relied too much on good board. On wrong cascade and a Gargoyle cast, and it’s over. None of the Medium Faction have that problem.

For me, Warren is only hard because of 5-room path. If it’s 3, it would be in Medium, or even easy. Charm is strong, but it’s random. In Boss room, if Luna is dead, the winning chance is quite high. If Bunnicorn is gone too soon, then there will be a problem.

Good Charm targetting will result in all troop having only 100-200 lifes in just a few turn, and some killed by skulls between that. Luna’s spell can only be so high, that speed won’t be on your side, unless you got Deathmark on them.

My team of Luna/Bunnicorn/Bunnicorn/Luna is able to enter Boss room a lot of times, but no luck in winning yet. Always Luna with 40-300 life for some reason. One time it’s Bunnicorn instead, skydrop skulls still kill me anyway. So I think my Hoard 199 + Kingdom 14 is more than enough, just have to try more and hope to get lucky.

That’s why it’s in hard. It got some scaling scale and protection, but no way to control it. In Extreme, you will need a lot more luck.

Disagree with Warrens. Warrens is easier than Dark Pits because you have a viable offense.

“Spam Charm” in The Warrens is a very bad tactic - you will quickly kill 1 or 2 troops but what’s next? Nothing. Your chance - it’s cast from Luna and luck, luck ane one more time luck for correct effects.

I actually beat Warrens (hoard 200) using 2x bunny and totally relying on him for offense. If he kills the middle troops, that’s a problem, naturally …

I like this, and I generally agree with it …

So…can the opposing Illithian Colossus actually shift all the magic out of the battle if you don’t kill him quickly enough? Or will their Servitor kill you so quickly it doesn’t even enter as a concern?

I’ve only dipped my toe in and played the Pure Faction at level 100, but it definitely seems a little sketchy as far as I can tell.

I tried it at 150, no problems clearing the whole floor except Cedric messed my order up. Went Colossus, Servitor, 2x HiveMind.

Right, I won easily as well. But it’s at the point where the stats are similar.

What happens when the opponent has a lot more than you do?

Having done level 300 with no issues, I made sure that my Hive Minds sucked all magic out of the opposing troops. Except for the Colossus, who I targeted with my own Colossus to make for extra skulldrop survivability. Spent the entire mythic battle battle letting the AI AoE me for 1 damage each, then stealing that magic right back afterward.

Edit: I targeted the Servitor first because that AoE terrifies me. Then the enemy Hive Mind.

I got through 200 potionless with no issue, so I’m much less concerned with the leaky system now, even though I realized Hive Mind also takes magic out of the battle more often than not.

It’s a strange fight pattern, but I’m appreciative of the change of pace. Interesting to win, not by focusing as much on damage-dealt, but rather on neutralizing opponents’ spells.

I’ve beat 200 and 300 potion-less and there’s really not much to say about the delve battle. Its pretty Mindless…

(at this point, I’m just waiting till 500 to write any sort of strategy down … if any exists… since the battles seem very simple?)

In Delves, the computer has a pile of stats and that’s about it. The player can choose a banner, get mana surges, set his troop order and (hopefully) has a plan. They hit harder but you hit faster and smarter. Drain their magic before they drain your magic and you should win.

Beat Illithia Delve 500 with a pure faction team with no potions. Hoard 199, 50% kingdom bonus, troops medaled because I can, 2 Nysha, 1 Anu

I’m going to start with the team first this time, since I want to comment on it.

If anyone read the spoiler thread, that’s the team comp I thought to use when I read the spoilers. (rip Taransworld). For 200/300, I used Fell Banner (+2 Yellow, +1 Purple, - 1 Green) which actually felt better to use, but you need to cast Servitor quite a few times, making it slightly better to speed Servitor up… I’m still not 100% confident on Tentacle Banner, but it worked out.

And the reason I start with the team: the 4th slot doesn’t really matter, but you may need to use it as a backup troop due to magic drain. If you put a second Servitor/Hive Mind, its very unlikely to be used much at all since they’re slow to fill.

… and I needed that 2nd Hive Mind.

1st battle: nothing to write home about
2nd battle: fought the ultra-rare room of Golem, Tome of Evil, Void Portal, Sacrificial Priest. I thought it would be funny if Sacrificial Priest killed off its own team.

Priest managed to kill off Void Portal and Sacrificial Priest, which was funny. Sadly, Tome of Evil managed to cast 3 times that battle (+2 Purple doesn’t help my cause), and on the 3rd cast killed my 3rd slot Hive Mind quickly.

This battle turns out to be more of a stat check than anything. Do you have enough magic? If so, your troops will be effective and you should win. Are you low on magic? It may be tough.

For me, it took 2 casts on a troop to remove their magic, since the enemy stealing 50ish+ magic is still troop ruining. With only 3 troops remaining, there’s less targets for the AI to cast on. If the AI casts on Hive Mind and you only have 1 Hive Mind, there’s not that much more you can do.

Colossus shrunk the rest of their team and gained a good amount of stats, which is a good thing since the AI got a late flurry of skull hits in. The AI couldn’t break through the top slot and my Servitor and skulls cleaned them out quickly. Their Servitor and Mind Eater died on consecutive turns.

At no point did this feel hard, but I could see a lower hoard make this much harder to approach. Level 200/300 was easy, 500 was okay. Something like The Deep Hive or Depth of Sins felt easier, but Illithia was still easy. 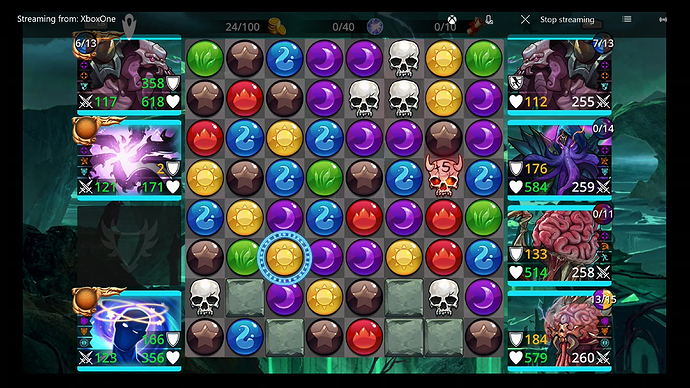 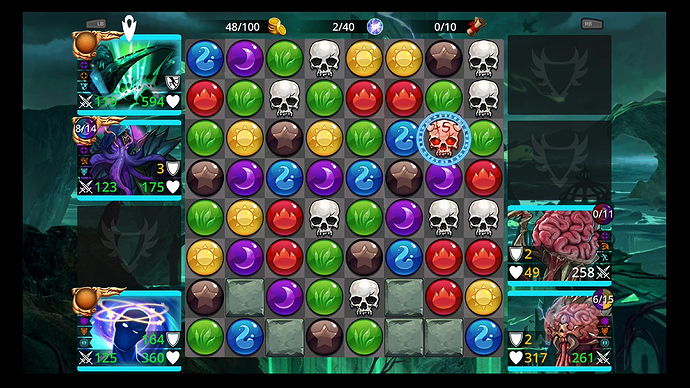 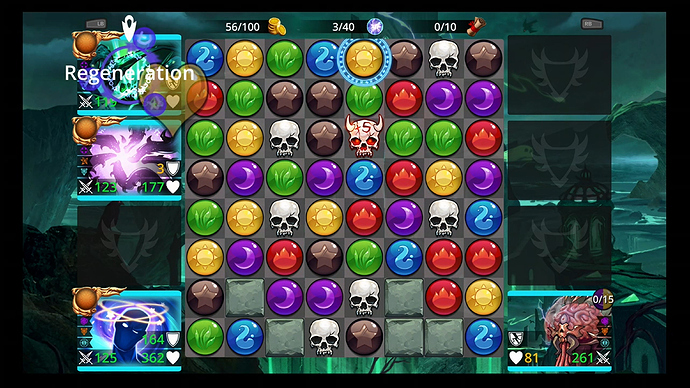 troops medaled because I can

Do the medals work now throughout the Delve, or still only in the initial room? Asking for a friend with medals to use. I’ll get there someday.

Thanks for the strategy. It doesn’t look like I’ll have the time to do 500 this weekend, and it’s great to see this one is doable without potions…well, technically they’re all doable without. Thanks again.

It should be fixed, was in one of the previous patch notes. The +6 magic helps Hive Mind a decent amount since its base magic is really low.