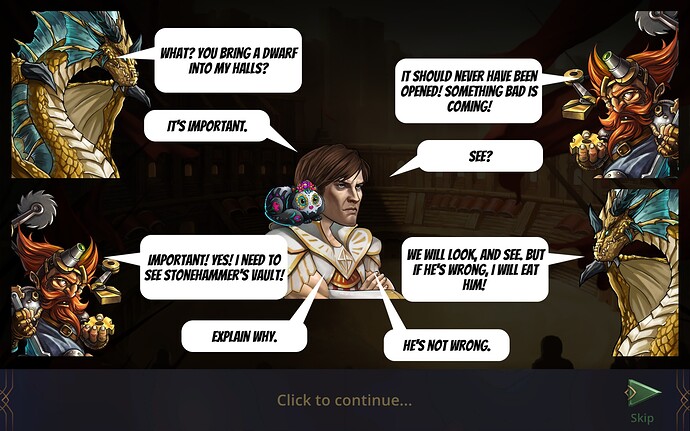 What you were expecting to happen, and what actually happened:
I expect that I can start completing the quest «Stonehammer’s Vault», but this does not happen

How often does this happen? When did it begin happening?
Every time, I can’t continue completing quests

Steps to make it happen again
I go to section «Adventurer’s Path» and select the button «Adventure. Select to continue your quest». Next, the scene with the dialogue shown in the screenshot is played. There is no background during the dialog scene. After that, the name of the quest «Stonehammer’s Vault» appears. And when I choose option «Fight» the game freezes.

Same here. Just rolled an alt and soft lock on this battle selection every single time.

Same issue here on xbox series x
Game crashes in exactly the same spot as described above.
Other quests worked fine until I came to the above one.
upon checking my kingdoms it appears all kingdom quests are now complete…but underworld does not open…as a result cannot go any further in the game.
Other aspects of the game such as pvp seem to function normally.

please look into this…