Asking for help in explore 1 battles

I have 2 Ironhawk, and I want to level up my Slayer class.
Its a good weekend to play a lot of exp. 1 quick matches.
I look for the weakest (life + armor combine together) kingdom’s troops.
my team will be a weapon (open to suggestion), devil dust, and 2 ironhawk. first cast is 15 damage to all and bleed on the left troops according to the deaths troops, will could lead to end of match after one cast.

I want the weakest kingdom, and if you have good team suggestion (weapons, banner, talent tree) it would be great too.

There are many threads about this already.

Short answer is fastest team including hero uses 2 dust devils and only 1 Ironhawk. I like wizard wand for hero but doesn’t matter. Pass turn once but never match gems which is what takes longest. Wild plains and some others cap at 20 total armor/hp

We need a weapon that gives a extra turn and start empowered to use 2 ironhawks properly.

Well, I use this team in Sin of maraj. The slayer class is needed to bleed enemies that don’t die on the first hit, as you say. In Pecado de Maraj level 1 enemy troops usually fall at the first attack. That is why I do not see the weapon to choose as important, its effects don’t happen until you cast its spell, and in that realm it is not necessary becausa by then you have already won the battle, so I chose one that did not coincide in mana with the rest of the troops.
What I have done is raise Dust Devil to the maximum elite level and use medal of Nysha x 3. 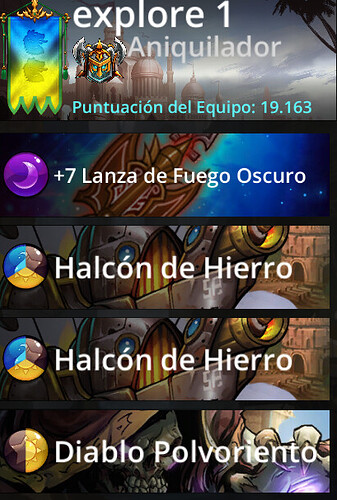 What I have done is raise Dust Devil to the maximum elite level and use medal of Nysha x 3.

Both of which are completely irrelevant in this case - Dust Devil always does 5 damage (perhaps you meant all 3 traits unlocked instead of elite-upgraded with medals?) and Nysha never comes into play because you don’t cast hero weapon or Ironhawk.

It is possible that it is irrelevant, actually when I updated the elite level of said troop I only saw that it went up by 3 magic, the damage it did before or after updating may not have been affected, effectively.

It’s true there are enemies who will perish from 15 dmg with 1 dust devil and 2 hawks, but not all will. Slayer class bleed is a good strategy to offset this. But once your slayer class is maxed, if you want to work on leveling other classes, 15 dmg by itself with no bleed isn’t enough anymore. That is why I mentioned the 2 dust devil team which does 20 dmg and works with every other class. And pick a weapon and banner that can fill the weapon in a single gem match for the rare times you need it (soul gnome over 20hp)

Curious if you guys are tracking number of GaP battles with the 1 dust devil team, and how it does in a GaP? FWIW my best with 2 dust devils when I was leveling classes I think was 54, but without hero in team (I use sister superior, not greed) I think best was 67. For me at that point I figured roughly 20+ percent more gnomes was worth sacrificing the small amount of champion xp that could be farmed elsewhere, YMMV

I was looking at this again for a fast team to kill 150 red enemies and also advance the Elementalist class and came up with this:

Leprechaun usually charges Crude Club or it only takes one Red match to fill it, then cast. 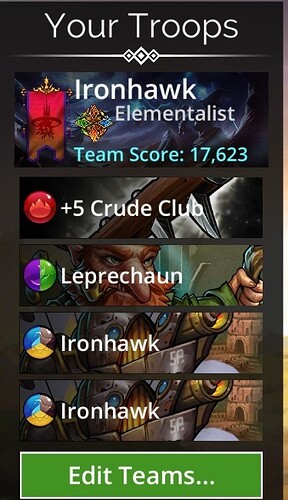 Thanks everyone for there comment.
Actually @Pau helped me the most with indicating Sin of Maraj as the weakest kingdom. and I succeed to run 6 battles in a minute, but it’s not 100% guarantee.
I used purple weapon of 5 mana with scatter damage (not necessary) slayer class, as I mention in the post for bleeding and also for leveling it up. devil dust and 2 ironhawk. mostly is one cast to win the match. depend on the strength of the enemies.
BTW - about bleeding, if for example I killed 1 troop with the single class, all remain troops get 1 bleed. but if the first of the remain die, all enemies below him get the second bleed before the bleed damage applied, which lead to cascade of bleeding and end up the match in single match. one of the newest sin of maraj troop own 20 (life + armor), so before month or two it was even weaker kingdom than now.

Title made me cringe. Devs have way of tracking how many battles and where, but I just think giving them the information may lead to unwanted changes for players. There are posts that suggest they do not play the game, and imo, this title feels like painting a target on a current playstyle. I would much rather see the title as asking for help in explore 1 battles or something not as obvious.