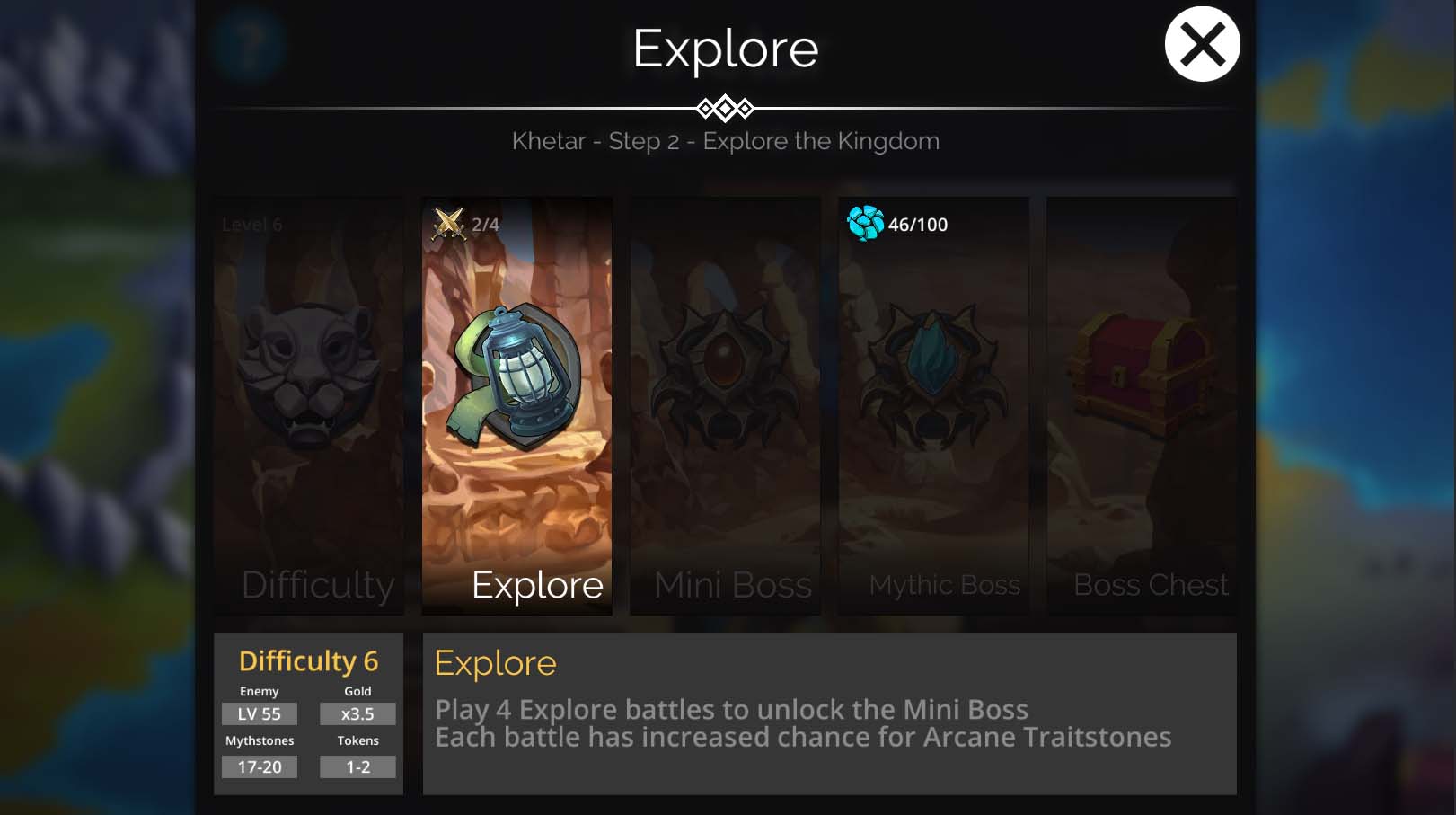 Explore has been reworked with a new system. Explore will still remain the most efficient method for getting Traitstones, and while there is no nerf to Traitstone farming, end-game Players can optimize it a tiny bit further with the new system. 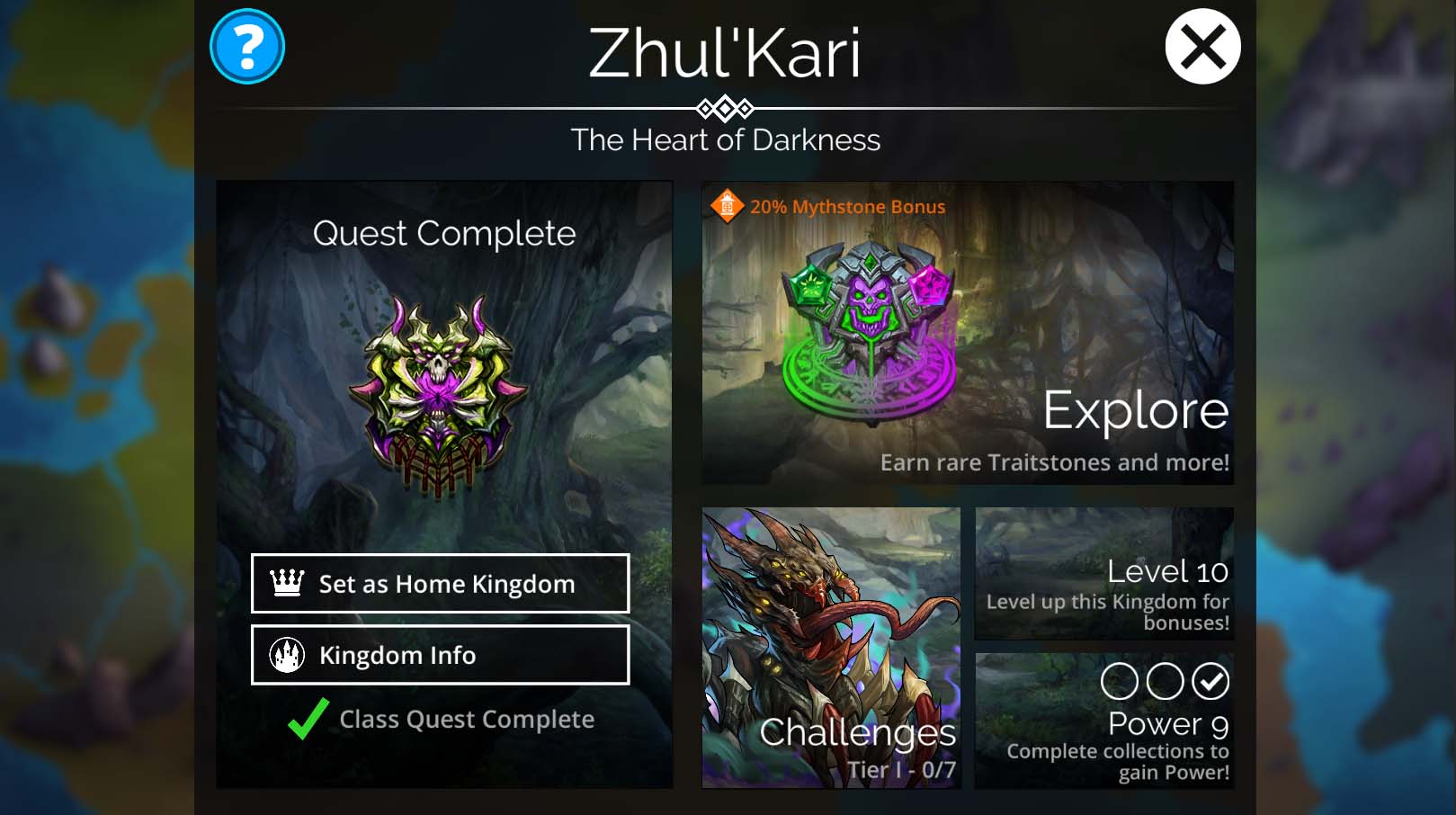 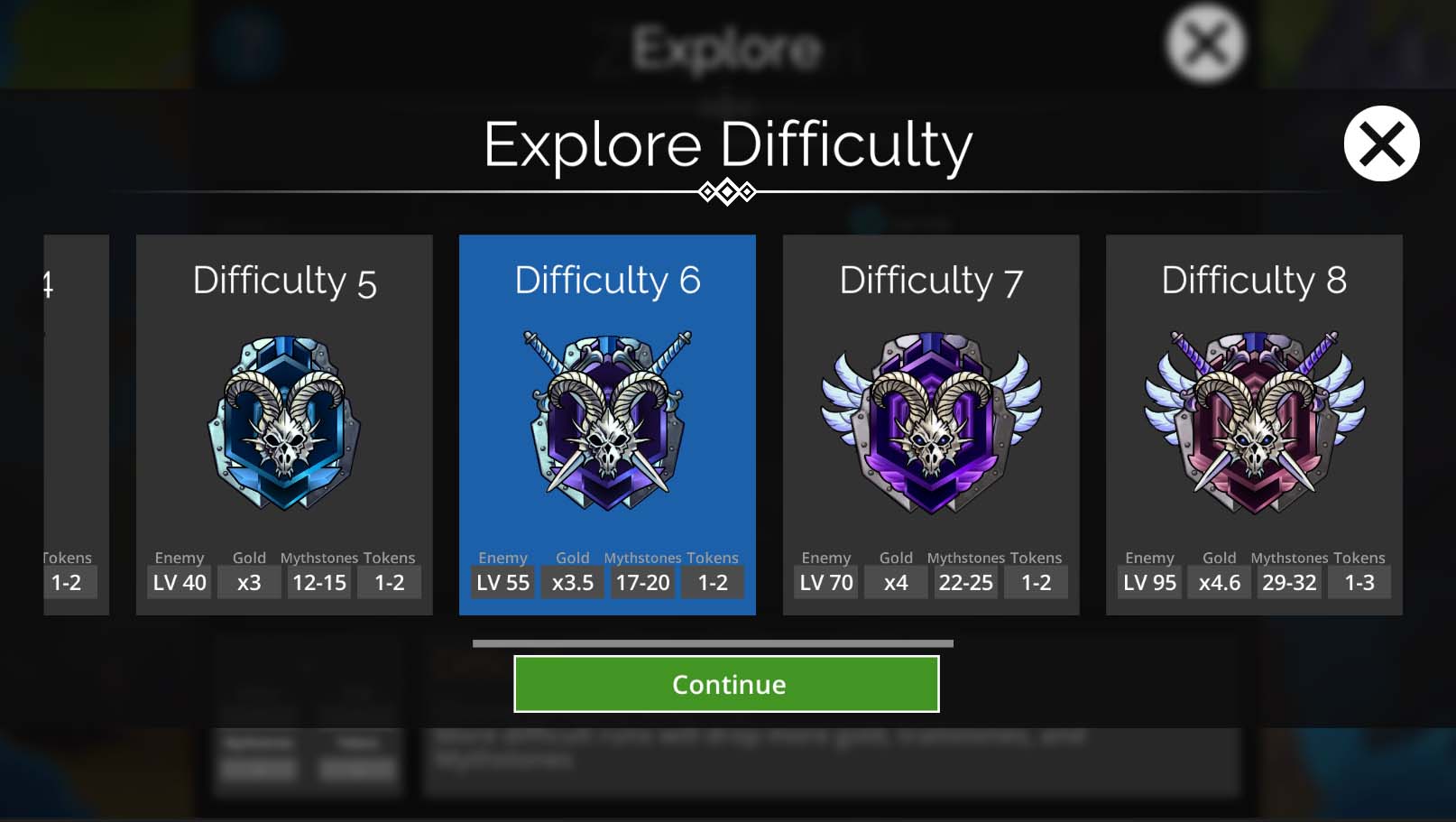 Explore Runs contain various phases which players will go through during the Explore Run.


Difficulty: Players choose the difficulty on which to attempt the Explore Run.

Explore: Players need 4 successful regular Explore battles to progress to the Mini-Boss Battle. These battles will not contain any Troops higher than Epic rarity.

Mini-Boss: Players will fight against a Mini-Boss (always a Kingdom Legendary), no other troops than the Mini-Boss will be Legendary. Explore Runs will often end here (regardless if the Player wins or loses) if the player has less than 100 Mythstones. Also note: If the Player loses, they will only gain half the amount of Mythstones compared to if they would have won.

Mythic Boss: Winning the Mini-Boss Battle and having 100 Mythstones will allow players to continue their Explore Run against the Mythic Boss. The Mythic Boss will always be a Mythic Kingdom troop (which will be the only Mythic troop on the team). Defeating it will grant the Boss Chest.

Boss Chest: Players can open the Boss Chest to earn some Tokens from the Explore Run. Explore Run will restart after Players receive their Tokens. 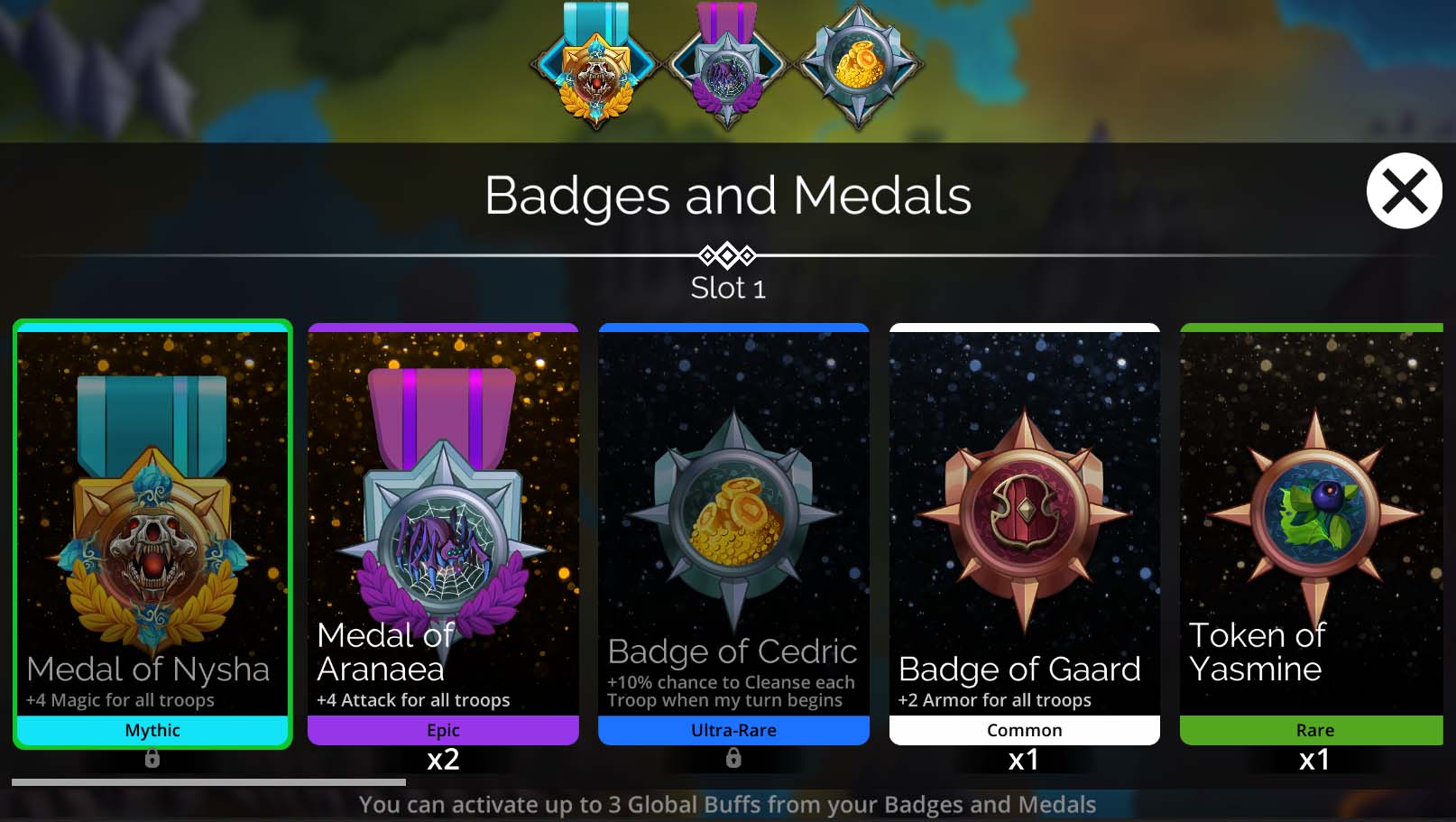 Medals, Badges and Tokens are new collectibles that Players can collect. Each has a rarity, and name (usually based on an Krystaran Deity or important figure).

More Tokens/ Badges/ Medals may be added in future updates. 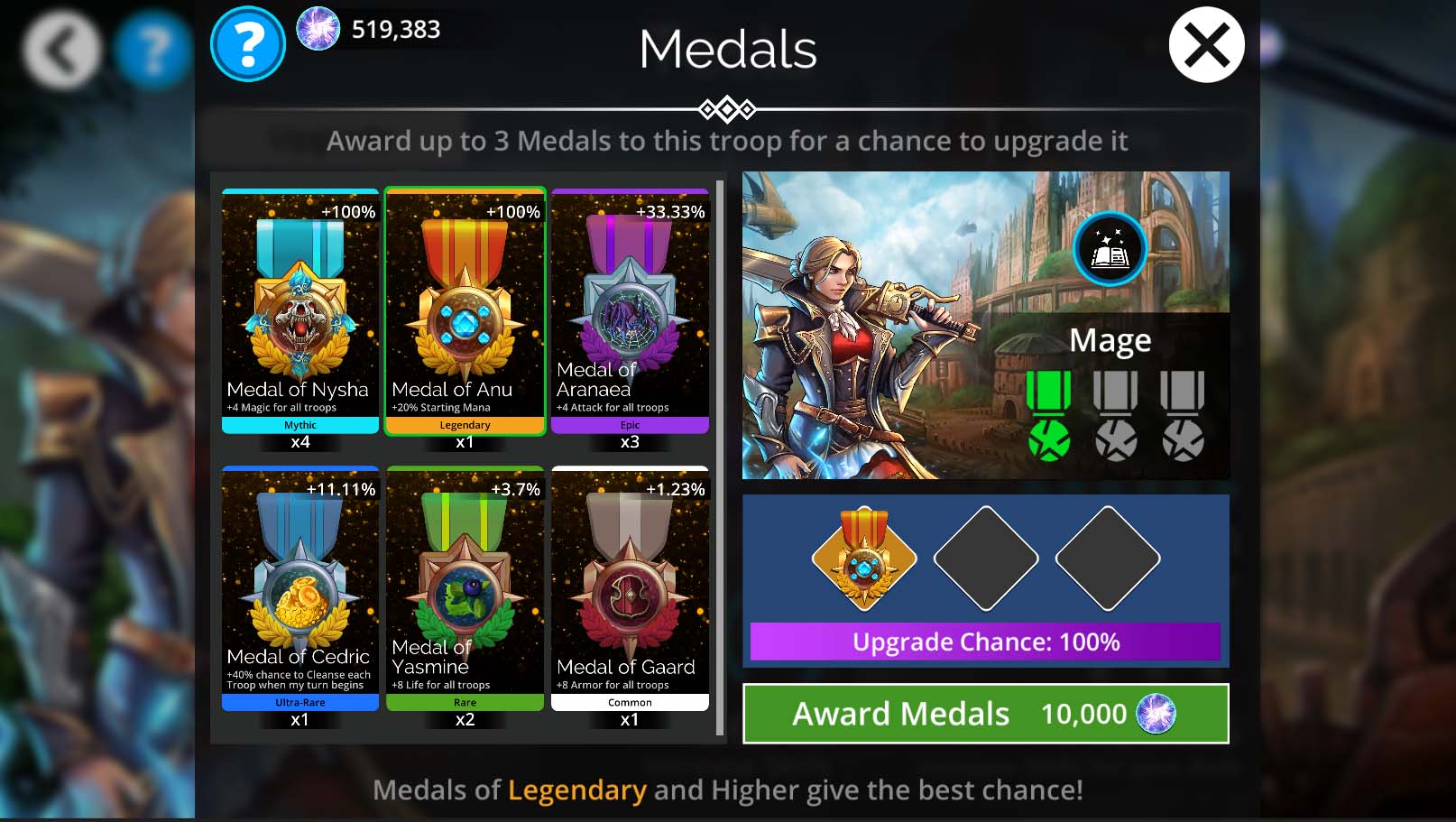 1st, even while on vacation.

Orbweaver’s Legendary trait, Familiar, has had it’s chance to summon reduced from 50% to 35%

Update is live on PS4.

Not showing up in unowned tho

YAY TACET!!! Go on with the new videos when will your first come out?

Is it just here at my PC or is there really a trojan within the update of the GemsOfWar.exe?
Avast showed me IDP.Generic…

We’ve updated and added in new articles on our Help center for the 4.6 Update:

So much content. I do not envy new players. I can barely keep up as a vet.

Explore Runs end in a Mini-Boss battle, who has a higher chance to drop an Arcane. Traitstone.

Head’s up on the Mecha Gnome, we have had to cage him…

He will be releasing tomorrow, and will be available for players on 4.6 AND for those that haven’t updated yet. <3 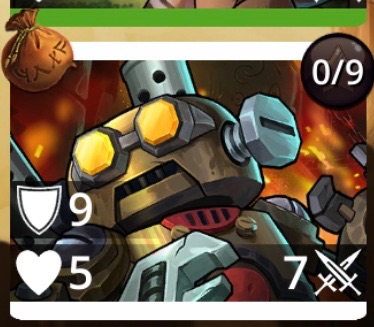 With higher difficulties, fights take longer and are more akin to Delve fights than previous explore.

Change Class XP to give more than 1 per fight on higher difficulties to level classes as well.

edit: with a modified key team

The new Explore feels like the most well-thought-out feature GoW has seen in a long time.

My bonus kingdoms aren’t shifting after every explore set, not sure why.

Someone (me maybe) should definitely go through the troop list to see which troops are getting way wrong bonuses because their assigned role is nonsense.

Otherwise, mostly good things. Explore is no longer mindlessly boring, and we have very clear goals and breakpoints to aim for with this new system as per what we want to get out of medals. I’m pretty sure all progress with this is going to take a very long time, but we can do it at our own pace and set our own goals for how many medals we want/need to have.

Although getting one token for doing six runs (difficulty 2-7) to reach a mythic boss is not a great place to be when people realize that tokens don’t do anything until you upgrade them. BIT of a turn-off for those who don’t see the whole picture.