Is it possible to like this 30 times or do I need to make a new account for each one?

I’ve got 2 former raid or invasion bosses that are legendary, I’ve had those twice each I think, but with insufficient copies to advance to mythic! So it’s never going to get taken up.

3 copies for 120 gems is cheaper than when they were the weekly event troop, and you will keep getting that offer until you mythic them. I love this offer and think it’s great.

Yes, but knowing them, they’ll do like 3 scrolls for 300 gems. I’d say save time and don’t bother programming that lol.

I’ve not got any pet offers yet.

Do you have kingdoms in these situations? 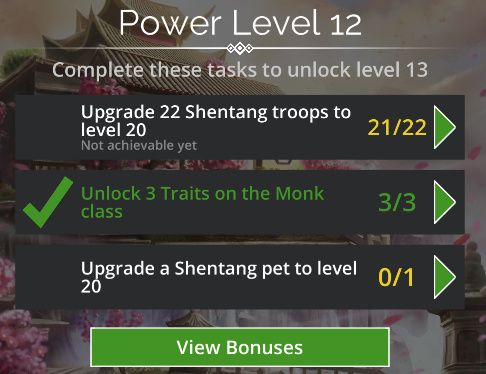 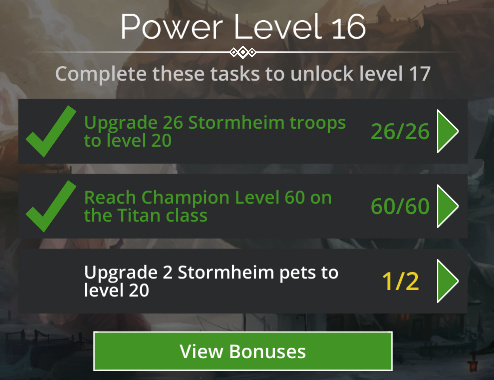 You need to be specifically in a situation for a kingdom where the remaining roadblock to the next Power star is leveling up a pet (and I believe you need to have at least one copy of the pet that needs leveling already in inventory [not 100% sure on that though]).

Tier 7 is pretty bad value for scrolls relative to every other Tier.

Looking at pets for Kingdoms.

So I don’t think I’m going to actually get a pet upgrade unless I use blue orbs or wait for the GW and Doom troops to naturally be ascendable. The issue here is I didn’t play from the start, so GW troops are still only nearly or just at legendary. I have 2 Mythic Dragon’s Claw pets, so that’s a waste anyway and Peryton is still Epic as well.

Looking at if I blue orb…

Blighted Lands with Wimp not mythic (only just released).
Bright Forest I have 2 pets at Mythic.

So actually the only pet offer I could get (I think) would be Wimp in Blighted Lands, which is L5

If I blue orb the doom.

So, I don’t think I’m going to be offered those at this stage?

Thanks so much @EliteMasterEric & @Redi1 for compiling all this information.

I was going to wait until I had power orb and made that look better to use it but if someone wants a temporary visual version (potentially long term temporary version) here it is.

Do we also get troops deals for non myths or hero xp where the kingdom is allready maxxed?

So, I don’t think I’m going to be offered those at this stage?

When evaluating whether to offer a pet deal,

So for a pet offer to appear,

As a result, there are quite a few kingdoms where two eligible pets are yet available to purchase via daily deals.

If devs want a more effective gem-sink, they really should make any pet not-yet-maxed available for purchase, regardless of what the player’s kingdom stars look like at that moment — same with any troops in the regular chest pool, honestly.

Everything needs to be mythic eventually

Seriously devs. I’m getting a bit tired of offers for chaos shards/ingots/jewels/medals. I have a lot of this stuff already thanks

I dunno how your algorithm works in selecting the offers being given but still yet to see pets from them. Which is something I might spend gems on…

They should add the doomed weapon forge scrolls to the mix if they want to increase the buy rate.

Yes! You’re a genius. That said, forge scrolls might eventually not be an issue as TOD should eventually become a weekend event after the current weapon set is done and the weekend events might not have new weapons.

I got a Manticub offer despite it not being the last requirement: 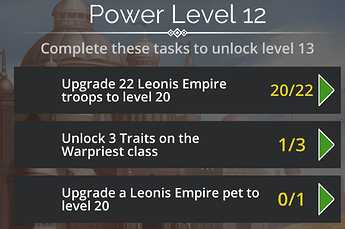 I just got my hardest decision yet: 2 Deeds of Magic for 300 gems. On the one hand, 300 gems is a pretty big ask for just two deeds. On the other hand, Deeds of Magic have been the hardest to come by, and will take the longest to finish based on availability to date.

I’ve gotten Deeds of Magic multiple times, but ignore it each and every time. We’re so far behind on Imperial Deeds that I just don’t see the point. The next faction is going to be Blighted Lands/Purple Deeds though, if you’re in dire need.

I got a Manticub offer despite it not being the last requirement:

It has to be A requirement, not the last. It can even be not achievable yet.

Given the spike in magical power lately (e.g. nysha, +1 magic from delves) 1 kingdom magic point isn’t as attractive as it used to be. There is already so much overkill in the game.

I’m not buying deeds for this reason - other than getting the 50% stat bonus, the 4 imperial deeds (which never seem to pop on the AB) is still the limiting factor.

If you think about the troops you use that REALLY need magic (leprechaun and a few other converters), you probably already have enough magic to perform their job efficiently enough.