Do you have any more rigorous documentation than this? Because 0 for 30 is within acceptable parameters as being brushed off as “bad luck” if the given rate was 10%. But 0 for 120 would be about a 1 in 300,000 cumulative probability. 2 (or fewer) for 300 should be a 1 in 90 billion (yes, billion with a b with a b) cumulative probability for a stated rate of 10%. Without hard data, this is going to be written off as “anecdotal”, though.

Something as rare as this (EVK only has a stated drop rate of 10% of a normal vault key, which is in and of itself only about a 10% rate on vault weekends) is going to be really hard to get a trend of. But you can show trends with relatively small sample size, especially if your samples account for only drops where a Vault Key/EVK was dropped.

For example, lets say hypothetically 100 rigorous samples were taken where some kind of vault key were dropped. The stated rate of epic vault keys is 10%, but only 3 epic vault keys dropped out of the 100. The cumulative probability of getting 3 (or fewer) EVK’s out of 100 is about 0.78%. If this were on the dev side sampling rates before release, this would definitely be in the realm of need more samples. On the outside looking in, this can still be described as “bad luck” because we have a small sample size. But to accept this we have to also accept that it is unlikely for a mistake to have been made and released in that state. If we take the tiniest leap in logic and assume the intended rate is 1%, and run the numbers again, the cumulative probability of getting 3 (or more) EVK’s out of 100 is about 7.9%. This is not proof of anything one way or the other, though.

But what about 0 for 100? Well, if I were getting this sample at any point during the dev side, I’d probably be ready to examine the mechanism then and there. If we get this on our side, we’ve hit what should be a 1 in 37,000 occurrence already. This is getting less and less likely to be able to be written off as “bad luck”. If we make the same logical leap as we did before and assume a simple typo was left uncaught with inadequate testing (intended rate of 1%), we’d be looking at a 36.6% occurrence. Still, we’d have to make an assumption here.

We can look at other samples sets posted in this thread, for example, we have a 1 for 13. That would seem to be almost right on the money for a 1 in 10 rate, at about a 74.5% cumulative probability to have gotten 1 or more epic vault keys by this point. But even at a 1% chance, you would have had a 13.2% cumulative probability to have earned 1 or more epic vault keys. So we’ve had way less extreme outliers if we assumed 1% instead of 10%, but again, from an objective standpoint and based on rigorous data we can’t really do that…

So, as of now, the statistical data we have is inconclusive. It doesn’t help that this thread began as an off the cuff complaint backed only by a 0 for 15, which is only stated way deeper in the thread (and even that, given that the stated rates are correct, will still be experienced by one in five players who get this many vault keys), and making claims that can’t be backed up like “nobody has found them” (then of course easily and instantly rebutted by someone who did) which is likely to just get ignored. This would be infinitely easier for a rigorous check to be run on their end to verify the rates (along with internal check to verify that the 10% number is what should have been posted in the first place) on their end, but such a thing is unlikely to happen until after the weekend, when it is already “too late”, at least for this event. If you (anyone reading this) care at all, you should probably start tracking your drops so any potential mistakes can be identified or we can get enough data to show the rate does indeed trend toward 10% over large samples. So far I’m 0 for 0, so no help there.

Personally, I’m less concerned over “compensation” and more concerned over things being correct, especially with specific drop data continued to be withheld.

I’m curious of the rewards of these few epic vault keys found. Has anyone got a screenshot ?

You shouldn’t feel pressured by a game. Is it really that important to get the achievement week 1?

You’re absolutely right, but it’s normal for people to be excited to try out the fancy new thing, and get frustrated when it looks like it isn’t working after several hours. 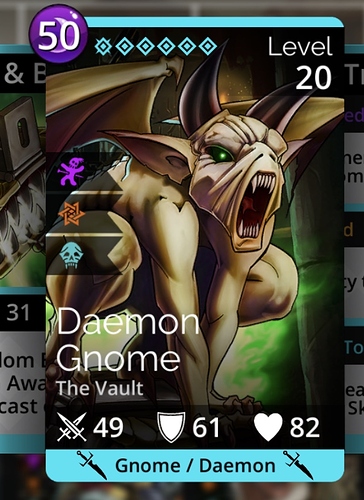 I’m curious of the rewards of these few epic vault keys found. Has anyone got a screenshot ?

Rewards are same as from normal Vault, just in higher quantity. If you will be unlucky, you will get basically nothing. Another person in my guild family yesterday got 4x Valraven + 100 souls + 100 souls + 25 chaos shards from Epic Vault Key. Of course, if you will be lucky, you can get something nice as well. But it’s working same way with regular Vault.

Rewards from my Epic Vault key: 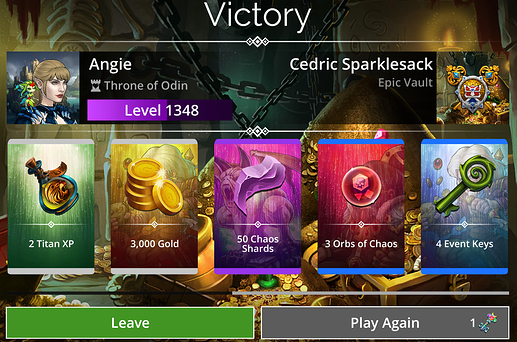 image928×315 70.7 KB
So being unlucky and not finding Epic Vault Key is seriously not the end of the world.

BTW: I played a lot to get my single Epic Vault Key. You can compare your current Gnome Tracker (after 2 days of grinding) with mine: 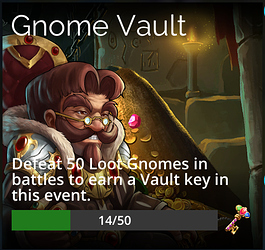 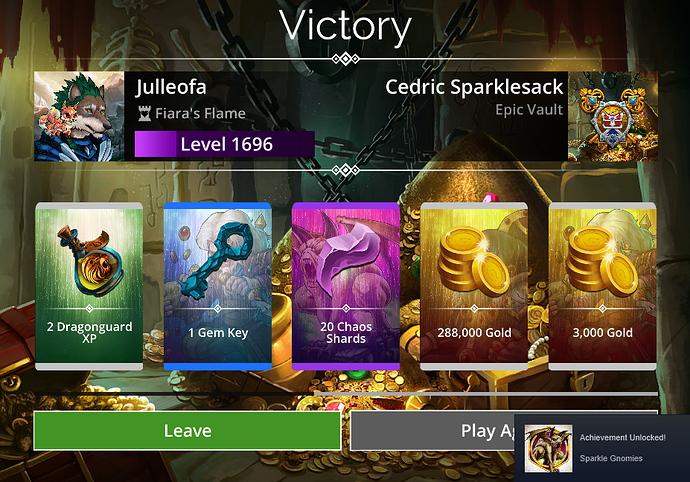 The Chaos shards dont seem to multiply like other rewards
¨

I was a beta tester in the original group. Didn’t apply for the second one.

As for the rest, I believe you should start by taking your own advice.

If you feel that I have in some way violated the forum rules (other than your personal interpretation, of course), please feel free to report me. I am perfectly willing to accept correction from the moderators of this forum. From pseudo moderators, not so much.

but something else might be wrong or bugged (i know i shouldn’t mention it).
why you got 3 orbs from King Cedric?
from patch notes 5.1:

This is why I’m personally trying to get an Epic key. It sounds like a bug and I don’t want to miss out on it

why you got 3 orbs from King Cedric?

I’m pretty sure that’s just another misunderstanding between devs who design the game and community managers. 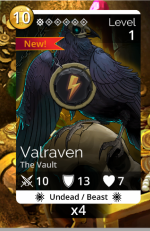 Cedric from Epic Vault also drops troops x4, so troops are multiplied there as well! And to be honest, I think this is how it should work. Since Epic Vault key is so rare (and doesn’t have any unique drops at all!), it all makes sense how it is now.
So I personally don’t think this is a bug, just a misunderstanding.

Since Epic Vault key is so rare

Exactly like pulling a mythic from a single glory chest - one can’t say it never happens, but…

I’m about ready to give up on the epic key grind and wait for a statement from the devs. I can accept that I’m just getting unlucky, but seeing so many suspicious data sets (and the several other bugs in the event) is extremely discouraging.

Hopefully this will be looked into and addressed one way or another. Just hit 55/55 on the tracker, for a total of 330 gnomes, and that seems like a reasonable place to stop.

Still 0.01% have the achievement on xbox. What about PC and PS?

PS4 says 0.1% but they round up after the decimal point here.

I found 1, my epic rewards… 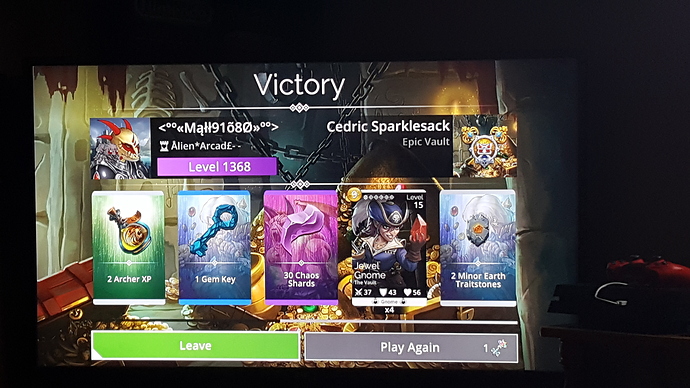 Can you remember which gnome dropped it? It’s possible it was accidentally coded to be a drop from specifically treasure gnomes. Probably not, but it’s an idea.