Time left on guardians does not show for me

What you were expecting to happen, and what actually happened
It should show that there are three days left for the guardian as it does on PC/other devices. It shows the guardian as expired. Here is guildie’s screenshot taken around the same time.

How often does this happen? When did it begin happening?
As far as I can remember, it has always done this on iOS. I re-installed the app two days ago.

It runs the same time as the weekly PvP. So check that timer and stop being so obtuse 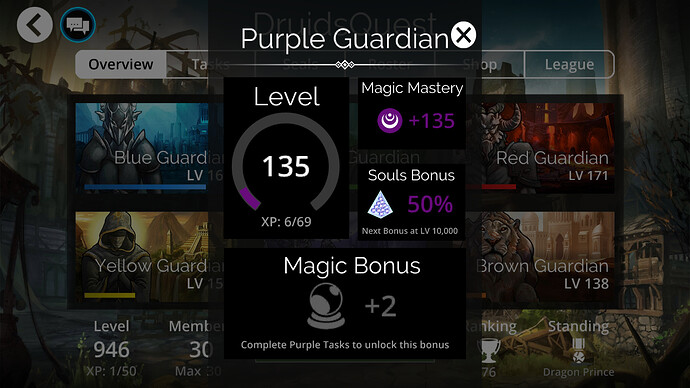 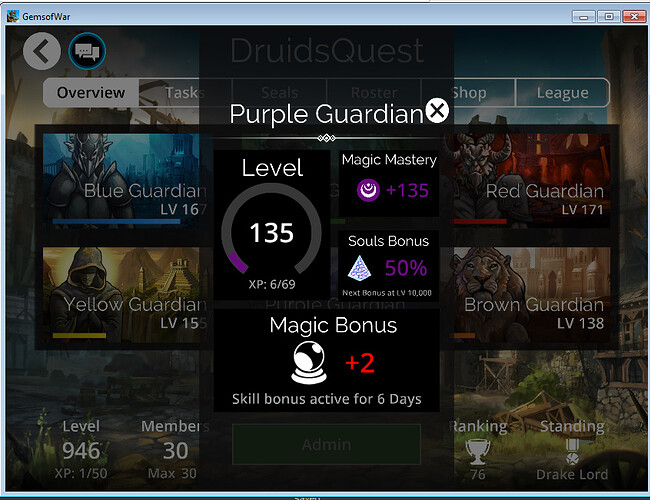 image847×651 211 KB
Steam shows correct information Magic Globe is active and 2 is red and shows the counter of how long before it expires.

I have guild mates who play solely on Android and they get confused too and start thinking we’ve lost one of our bonuses. This is especially confusing on Monday when we put an order to what task to do first.

It runs the same time as the weekly PvP. So check that timer and stop being so obtuse

You’re actually incorrect about this and the tone of your response was out of line.

The stat bonuses run for 7 days (168 hours, technically) from the time that the 12th task is completed for that Guardian. If there is time remaining from the previous week when the task is completed, 168 hours is added to the countdown.

On PS4, we used to have a countdown in minutes and it was easy to see when bonuses were going to run out. Now, we have no idea (we see the same thing as the Android picture above). If you’re in a guild that completes all tasks every week, it probably doesn’t impact anything. But if you are in one that completes some but not all, it can require some coordination to ensure that certain bonuses don’t run out.

Best way to track your bonuses until they fix the issue on Android. Once magic is expired it’ll no longer show on here.

On PS4, we used to have a countdown in minutes and it was easy to see when bonuses were going to run out. Now, we have no idea (we see the same thing as the Android picture above).

My best guess: Some side effect from the bug with Guild Wars registration.

My best guess: Some side effect from the bug with Guild Wars registration.

It’s been this way since 3.2 was released.

It’s been this way for weeks (at least on PS4).

Swype will always beat a keyboard.

I imagined the timers went “bonkers” along with GW this week, as in the timers in the servers presenting divergences for each plataform.

If it’s the same thing that I reported a while back, it’s a display glitch, you still actually have the Bonus.

If you go into Guild and tap on the Statue with the bonus, it shows as greyed out.

If you exit out and then go into PvP, exit and go back into Guild again, it should then show in red correctly.

This works for me on Android.

Hey guys, this is a display issue which we’re currently investigating. Your bonuses are active, it’s just displaying incorrectly on that screen. You can accurately see your active bonuses on the screen @awryan posted a screenshot of for now.

Sorry for the inconvenience!