No, they will never be worthless

A girl’s best friend! You sure got a lot of friends there…

Being a VIP of a high enough level that:

Also stolen extra turns and denied mana during raid and invasion. This happens frequently enough, and after all the whirly hypnosis traits animations resolve, that i also see it as throttling (at the very least, not being a priority fix makes it look like throttling per se).

Forgetting to do dungeons. 100% my fault but still really annoys me.

Pulling 7 mythics but no Wrath

. Wait till next week. Mainly glory keys and seals.

Does that invoke your Wrath?

Having the daily task to use 30 glory keys when our only option is to use 1 or 50. Get rid of this stupid task already or bring back the option to open 10 at a time.

When you have another gems player in the house that has to rub all their good fortune in your face.

It would be worst if you could only use 1 key at a time.

Well if you have more important things going on why are you here?

He’s here because he has more important things to do, like whine about people who whine about playing match 3 games. Duh.

Using over 700 event keys and still miss one copy of Pride to ascend it: 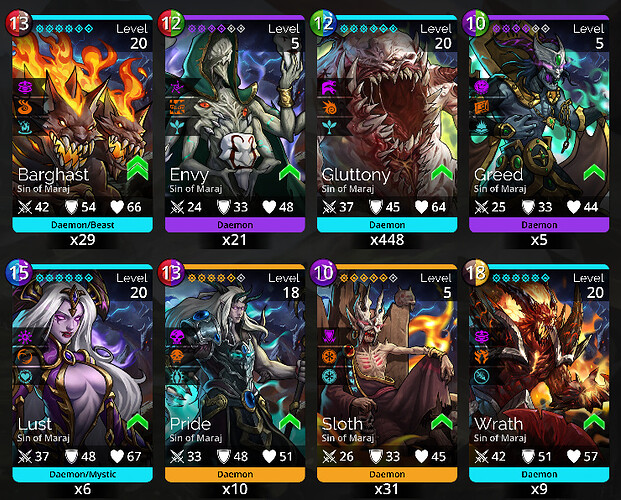 The second troop’s reaction when it has plenty of health left after Ubastet’s spell, but he Insta-kills it anyways.

In GW and PvP: The feeling when you use an exploder and you get zero extra turns (90% of the time you wont get an extra turn from them nowadays), but then the board is ready for CPU to pump up 2-3 of their troops and crush you. This is extremely annoying.

I have a great idea, why don’t we nerf crybabies for crying too much!

Agree with you. And one thread voting should nerf Ubastat or not. Most people chosen Not. Then Ubastat got nerfed. Great work!

Instead of nerf OP, they should Buff the troop never used.