Also how is the birb the closest? What about Snakelet or any other more long-ish pet? Or at least a dragon like the Wyrmling? The birb is neither long nor dragon-y.

Unless of course it’s your second-favourite pet, then it’s really as close as you can get.

Yeah, I know, she sent me birb-memes before

Though I must admit, if I would not have the Snow Bunny, my second pick would also not be one of the bunny-like pets like Owlbunny, but the War Corgi since Corgis are my second favourite. So I guess it does make sense…
Still, I think just giving yourself your fav pet when you’re a dev is an okay thing to do. Especially if you want it on the avatar representing you on the forum. It just leads to horrible confusion otherwise (well, not really, but…

). Imagine me using a Corgi in my avatar all of sudden - I bet everyone would think my account would have been hacked. 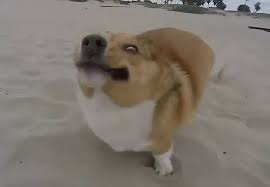 Typically, game devs keep seperate public and private accounts (often on different servers). The idea with the public account is to experience the game “fairly,” as in, how a real customer would experience it. After all, that burning desire to have something now is part and parcel of the game (and the F2P experience) and if they just cheat and gift themselves the thing in question, the devs miss an opportunity to understand and connect with their players.

The idea with the public account is to experience the game “fairly,” as in, how a real customer would experience it.

Ideally they should increase the hours spent with such activities. Collecting data and comparing the “feel” of it would certainly improve how they perceive and deal with our feedback. Leaving players too much “in the dark”, not being able to relate with our experiences and the silence treatment in some cases didn’t worked well.

They will stay that way unless something major changes. I doubt it will and have given up the hope. (Strong word ikr.)

All we know is that Pan’s Vale will get a rework in the future, but we have known it for a few months already. If we gonna have to wait several months, even a half year to a year for a single kingdom to get a rework it’s gonna be a torture. There is so many troops that needs a buff, but sadly it is not in the priority list like it was before, anymore. I remember the old good days when we got several troop reworks through most of the patches, and really missed these patches.

Out of the few things I don’t like with this game as an endgame player, this is the winner, as months flying us by and there is not even a single troop buff. I remember in the past when I looked forward to Mondays because there was a chance for some troop buffs, these were the days.

Constructive words: It would be awesome if you released a few patches inbetween with troop reworks only.

Yea, GOW team should treat end game user more . Those users spend hundred hours on game and more likely to spend $ if good content coming up. Right now, I’d say only around 50+ cards, that includes weapons, are playable. The rest are just for collection, kingdom power only.

Arena was nice that can play with card never used. But now with DB, not so fun anymore. You can win easily just to fill DB quick. Hope they can rework on it.

As @Lyya eloquently put it, we choose not gift ourselves. There are some testing accounts for gifting of course but I have an account with the Dev tag in chat which I play normally on. Unfortunately, I don’t have a lot of time outside of work so I haven’t come across a Shortlong !

@JayJay We actually believe we focus on endgame content a lot, and the team would like to revisit the new player experience and see where the pain points and struggles are as a new person in the game. But that’s another story.

Unfortunately, I don’t have a lot of time outside of work so I haven’t come across a Shortlong !

You should join a more active guild. Sparkle Ponies is too busy with real life to hunt for pet Gnomes.

@Cyrup, thanks for reply. On the second thought on arena. I’d glad and thank dev at least removed dawnbringer from AI team. We see the changes and looking forward to the new underworld coming soon!

Yes. So tell us @RiverSong, are diamonds worthless to you now?

No, they will never be worthless. Although, I am thinking of opening Krystara’s first Tiffany’s.

AI cheating. And no, its rng. Anyone with even most basic knowledge of statistics can run numbers and see for themselves.
Every aspect of this game is specifically scripted to favor AI, and the higher difficulty level player plays on, especially dungeons and such, AI will be more and more “luckier”.
5% even 10% could be within error margin. But when on Warlord I AI is 7 times more likely to get 4-of-a-kind, when gems drops from top; or when create/double gems, when AI uses this ability, spawns gems in more tighter groups and are 4 times more likely to get 4-of-a-kind, compared to player chances; or when abilities that depend on chance are more likely to trigger when AI uses them(Kereberos, 40% allegedly, chance, 22% success rate for player, 48% for AI). And those numbers are just for Warlord I, id say that for Warlord IV difference is at least twice that(but this one is subjective, i didnt run numbers on that difficulty).
That is bulslhit, that is scripted to happen 100%.