I’m on PS4, and things look very different over there. I used to believe (strongly) that defence team influenced invade options, but now I’m much less sure. I’ve been running a maximum power defence team for several weeks now (9000+ for me) and I get a pretty wide variety of invade options. When I was switching my D-team around to lower power options, I would get runs of really difficult invades and then runs of wide variety.

The big thing I’ve noticed over the last few weeks is that Bone Dragon just isn’t that common on our platform any more. A couple months ago, every second battle seemed to be MMBDDB but it has really dropped off. It’s not that Bone Dragon is UNcommon (maybe 2-3 out of 10, but always in different configurations), but I run a lot of Gorgotha fronted teams and he really doesn’t bother me. For me, it’s Justice everywhere I turn.

Hey back on topic, anybody know the banner yet? I wasn’t able to find it scanning the thread on my phone.

There are 4 of each purple, green, and blue. I’d imagine it’s +2 green and +1 purple. We currently don’t have any -1 blue banners, but I don’t think they’d throw that on this banner with so many troops using it. -1 red seems more likely.

We don’t have any minus to blue and no doubles to yellow or green.

edit: @Zuboki beat me to it

Always reassuring when someone else comes to the same conclusion! Either we’re both right, or both crazy…

I’m going the -1 Blue, because they seem to like to have green be somewhat plant life related and Blue be more frozen anti-plant.

The +1 purple, because it matches the common troop’s color.

+2 Green, because that seems to be the main Elf color.

I’d love to see +2 green (or yellow), +1 yellow (or green) myself. Make that last color whatever and I’d be good with it.

That would be great I would love it.

Emblem for the kingdom is yellow and purple, so I’m assuming the banner is +2 Yellow, +1 Purple.

We haven’t seen -1 blue, but considering there are a few blue troops here I doubt we’ll get that yet.

I’d assume the foresty-island kingdom at the south is +2 Green, +1 Brown.

Does anyone know the name of the new kingdom yet?

Or Magical Forest of Pointy-eared People.

not sure if she was joking or not but on the discord channel @Nimhain said its a unicorn wasnt it silverglade?

could anyone post this kingdom emblem? i scrolled through entire topic, couldnt find it 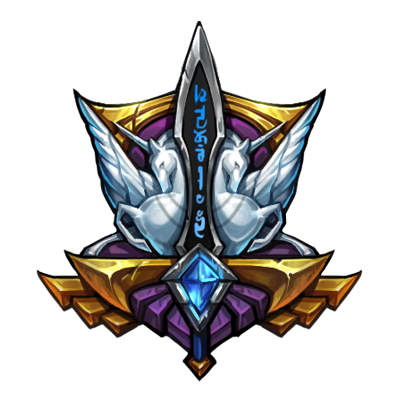 You have NO IDEA how many posts I had to look through to find this.

thank you very much

There’s definitely some blue in there. I have to think based on the color palette that it’s -1 red but that’s just me.