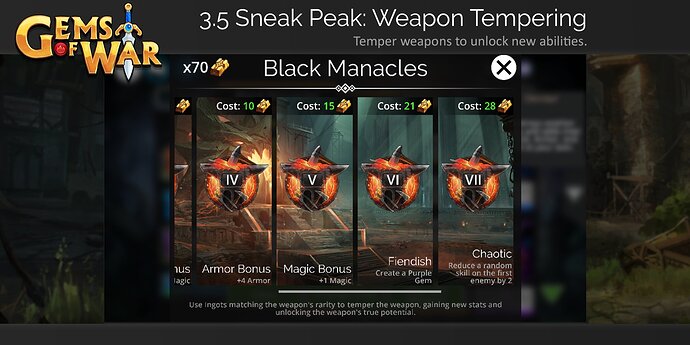 Hero is in for some love again. YAY!

Well… On the one hand this will make the hero class more relevant, which is good. On the other hand, there’s still that aggravating 50 gem cost to switch classes

I got that they don’t want to do away with the cost completely, but like, refreshing PvP opponents costs 1 gem. It shouldn’t be that hard to bring that gem cost for changing your class down to something reasonable, right?

Awesome, another currency is exactly what we needed

I’m all for new stuff, but given everything that’s happening…

Hmm i hope we get some more Infos on that soon.
From the screen this doesn’t look like i was hoping for, which is a system that would give the players the ability to make weapons they like technically/mechanically competitive with the strongest weapons, well basically with Dawnbringer.
This looks more like a system to make the already strongest weapons have some more bang.

It won’t change anything, with the current divine meta, you won’t even have the time to use your hero weapon

i can’t play gw this week with bard class on yellow, red and blue day. because i’m priest and spend all the gems for 5 fights a day, no. not really.

Well, looking at the screenshot weapons can be leveled up 10 times, with the cost going from 1 to 10 ingots for a total of 55 ingots. The ingots also seem to have a rarity attached, so you need epic ingots to level up epic weapons. Unlike troops, weapons seem to mostly of the legendary variety, so even if ingots drop like trait stones, getting them all forged is likely a task that puts acquiring Zuul to shame.

Everybody knows that the new currency will cost you gems in some way shape or form… should rename this game to, Gem Sinks of War

Gems and Gold and Souls and Glory and Keys and Traitstones and Seals and Event Points and Jewels and Orbs and Sigils and Pet Food and Ingots of War.

Really???
And how rare are those ingots gonna be??? As rare as VIP keys???

Super plentiful, as long as you spend real cash…

Yeah, right… who would have thought that???

How exciting, another pothole for us to drop cash into. Can’t wait.

You could make your hero a Divine with the Priest class

As silly as this may sound, “love” is significantly understating the amount of attention the Hero is getting.

It won’t change anything, with the current divine meta, you won’t even have the time to use your hero weapon

The weapons enchantment is but just a single part of the “love” the Hero is getting. I can’t say much more than that at the moment (darn it, beta), but a properly “built” Hero has very much to offer the DIvine meta, as well as other metas.

Check out Salty’s stream on the 3.5 patch tomorrow.

I’m not sure about this… So there are stats bonus and additionnal effects on the spell? Create one purple gem? Peanuts. Reduce a random stat on the 1st enemy by 2? Peanuts.
For the moment, this tempering does not look as a game changer for this weapon…

For sure, it’s going to take a lot of time to temper all the weapons. But it’s cool so we will have something to do for the incoming year(s)

. New features in a F2P are designed to be done in a long time, not in 5 days.