[Reported] If I Were A Rich Man trophy/achievement doesn't unlock

Thanks, I was wondering about this. It sounds like the trigger to check for the trophy is winning a battle in the quest line. That explains what people are describing above with their progress trackers. Hopefully it will sort itself out on Wednesday when the second set of quests unlocks - although they should really fix it to prevent more bug reports every time the event runs.

I “finished” story part 1 with 46/300 herbs and played another match in explore 1 that would’ve awarded 3 herbs. At this endscreen my game broke. This would mean 46+3=49 when my game basically killed itself and the continue button didn’t work. My steam achievement tracked exactly to 49/300 (I looked it up right now, out of curiosity). I didn’t pay attention if the three herbs when the game crashed were awarded ingame or not. As I said, it may be a coincidence, but, well.

My freeze came of the first PVP match after finishing the quest, and the achievement tracker did not move afterwards, but I can say whether on not it did from the match.

Steam version here - I’ll start off with a thank you all for your sacrifices.

After reading this thread a bit, I got 300/300 herbs before I started the Legends Reborn thing and the achievement popped after the first battle.

I do hope that those that haven’t got it yet will be able to get it tomorrow. It is most likely that a trigger occurs after one of these battles and it sends an achievement update.

Has everyone who has over 300 Forest Herb completed a Legends Reborn specific battle and still not seen this achievement tracker pop?

Similar to what @canadademon experienced, where it triggered after this battle was completed.

For me it popped once I finished the story. Before that I had over 300 and it didnt show

I can confirm now, that the achievement is unlocked on Steam, when a storyline fight is finished with 300 or more items.

I completed all Legends Reborn battles and still didn’t get the achievement.
Now I have hundreds herbs more than 300.

321 herbs collected and achievement stuck at 19% on XBox

Just adding my experience yesterday. PS4 here.
Started collecting Green Herbs way before starting Legends Reborn quest. Got over 200 then started Legends battles. Completed the track with 299/300. Went to PVP and as soon as got another Green Herb the Trophy came.
Also, after that I went to collect the rewards (the first pet) and at the final reward got the soft lock. Had to quit game and return but with the reward collected ok.
All the way the tracking showed the amount collected. 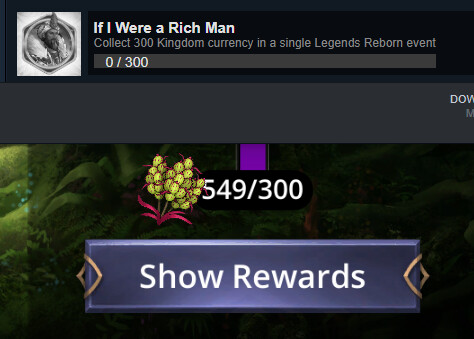 One reason this happens is they do not test with players on Xbox. I applied and was told they only test on steam. I think they need to test on all platforms. They also need better test plans. It is easy to catch bugs like this if you plan for common scenarios. Then you also have system wide integration test plans to make sure your changes did not break something else.

Also, stop the time gating please. It makes people really not want to play the game long term. If I want to grid 500 battle crowns in 2 days, I should be able to. The same for doing all 5 runs on legends. What is the purpose of time gating besides making players mad?

I’m stuck at 85% on xbox with over 300 green kills. I notice the tracker only went up after completing the 1st run through of the story.

I think this is correct. I did the story first, and my tracker is stuck at 15%, even though I reached 300 herbs afterwards.

These devs never fix things promptly unless they stand to lose money, so I imagine we’ll have to wait for the second story playthrough to become available and it’ll unlock after finishing. At least the broken achievement is only blocked for a few days this time, and not for months, like in the past.

To anyone who ran into this bug on Monday, I can confirm that completing a Legends Reborn battle today while being over 300/300 will trigger the trophy/achievement.

I also confirm this as mine popped immediately after the first battle today as well.