Recruiting has become close to impossible

It has never been harder than it is currently to recruit players. This may be a signal that Gems of War is slowly dying. It has lasted a long time so I would not be surprised.

When more casual guilds that have casual requirements just does not manage to find players, there is a clear signal that there is something that is not right. I fear our guild will slowly die because of this.

I have tried Global Chat in the past and nowadays and the past was a feast compared to now, zero interests. The forum is harder than ever before to recruit from mainly because most of the players is not hanging around here.

I dont find recruiting hard and im the primary recruiter for my guild. How much do you lurk in global? Do you actively talk to potential recruits or do you just use ads?

I cant speak to other metrics but Samsungs Game Launcher tracks user numbers GOW is down approx 50% on its peak over the last 32 weeks with the last 7 days only have 2400 to 2600.

This downward trend isnt unique to GOW all games are seeing similar drop off.

It’s always more difficult to find new players or keep existing ones playing during summer - which it is now where many players are so the drop could be that.

Plus we had a high because of the pandemic which is also fading out if it hasn’t already.

One other thing may be that there is little coming out that’s exiting to veterans.

I’ve just watched a preview video for my other game and there’s so much stuff in there people have wanted for a long time, plus some new surprise stuff and a campaign with great rewards that you don’t have to pay real money for to get. They also have a very engaged community and two community managers - community is very important and they interact with players and incorporate feedback and ideas.

So a bit of the “this is dying” feeling comes from the lack of community engagement by the devs. Many people don’t come here because there’s seldom anything positive, plus people feel they aren’t going to get heard anyway so why bother.

This also means other categories of the forums are dying, like recruitment.

Is the problem a dwindling player base, or a case of too many guilds? I suspect the truth lies somewhere in the middle.

I am GL for Match Masters. I have found some absolute gems via “auto recruit” and have not actively (via forums/chat) looked for players to join for a couple of years now. Yes I do sometimes get a dud but that can happen when actively recruiting too.
In the main I get someone within a day or two of a guildie leaving. I think the longest was 5 days.

Auto Recruit has made recruitment a non issue for me ! 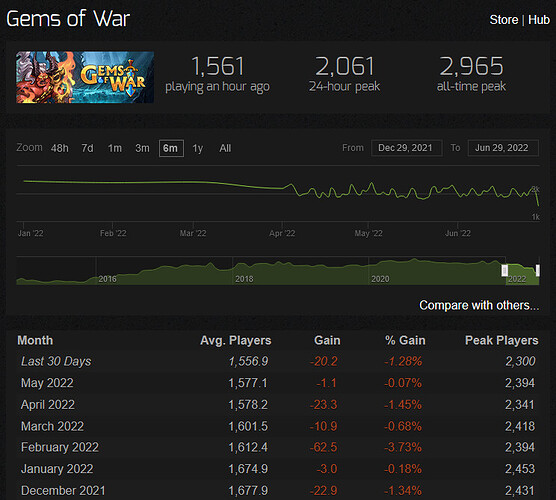 The guild im in PS4 has no problem, if there is an open spot to fill that in a few hours, mostly there is a kind of waiting list.
I agree that in this time Summer, the players are some more away and lower active but no I dont notice that the game is dying… and Im real glad about that coz I love GoW and dont want to think that’s ending!

I am GL for Match Masters. I have found some absolute gems via “auto recruit” and have not actively (via forums/chat) looked for players to join for a couple of years now. Yes I do sometimes get a dud but that can happen when actively recruiting too.
In the main I get someone within a day or two of a guildie leaving. I think the longest was 5 days.

Auto Recruit has made recruitment a non issue for me !

Thanks for your input. We will have to look into that more. We had a few bad apples, but need to be more patient and consistent with it.

@esslee how do auto recruit? I never knew that was a thing before you said it

I think he means open recruitment so his guild can be directly searched and joined; as opposed to ‘invite only’ 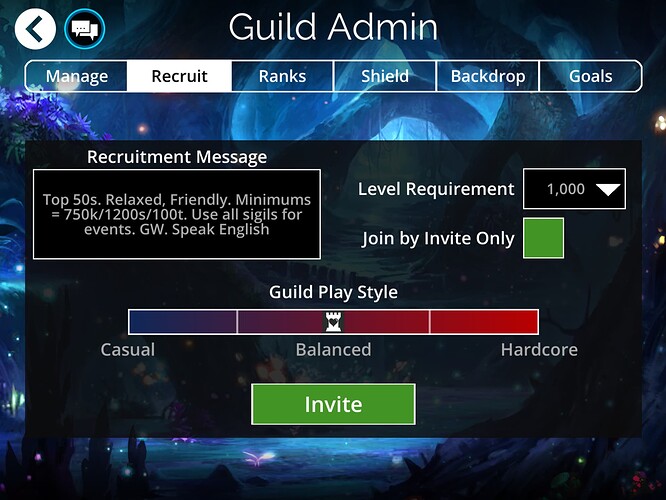 I am Guild MISTRESS by the way

The only potential downside of ‘open recruitment’ is that there is no restriction on the specified player level. It may say level 1000 but that doesn’t stop level 100s joining. Then there are the ALT leechers of course but yes, sometimes the good guys come aboard.

I have not had too much problem recruiting, i am not one for spamming banners in global chat, i drop in from time to time and generally find a recruit within a few days. Its mainly luck really, right place right time.

Too many guilds for the number of active players

Years “ago” I was with a guild called The Rabble a very good guild well organized and friendly guild i helped manage that was amongst the top 10 guilds in the world. As far back as I remember we even was the 4th guild among the top 10. And people came in grabbed free rewards and dashed out making a lot of us mad and quit because gems of war became very hard to handle with the new task, having to more events in one week. And lot of us Worked with paying jobs. The ones that quit had to, and see when I quit The Rabble I tried to make my own guild. And turns out there is billions of guilds out there ranked in the billions with 0 trophies. The reason I think no one joins the top guilds is because that no one knows about them, and the fact it’s to much work to handle. Kids go to school, adults work, and many are sick with Covid 19 now. These are hard times for us all but I have faith things will get better for all of us. I joined a new guild that’s stress free and we have a day (Friday) we use as a rule free fun day where we can donate to any task we like too with low weekly requirements. And we kick those out who show no promise to help use all the time. Make sure your invite only is turned off and your requirements is low. I bet you will get a lot of people if you find a way to make your guild a fun guild and not a stressful one. Our guild was disbanded so we all quit because the guild master wanted to retire but now we both in a stress free guild having fun.

Is this true? We have it at 200 and never had anyone under that join, have we just been lucky?

Our “Level Requirement” is set at 1000 (the highest) and I have never had anyone join who is under that level. In fact, these days we could do with the minimum being put to 1200+ or even a 1500 option.