I cast Creeping Death with my Hero and as it killed Gorgotha her on-death summon proc’ed and summoned an Ancient Horror in 1st position.

Then the part of the Creeping Death spell that applies the Death Mark took place, and the Death Mark was applied to the newly summoned troop in 1st and TDS in 3rd position. The problem is Death Mark is supposed to go on the “Strongest and Weakest” enemies. Sylvanimora is clearly the weakest yet it didn’t apply to him!

edit: It is entirely possible that everything is working fine, except the problem is that the summoned creature shouldn’t have the Status Effect? Either way something is not correct here but I’m not sure exactly what.

I doubt I could ever create these conditions again. 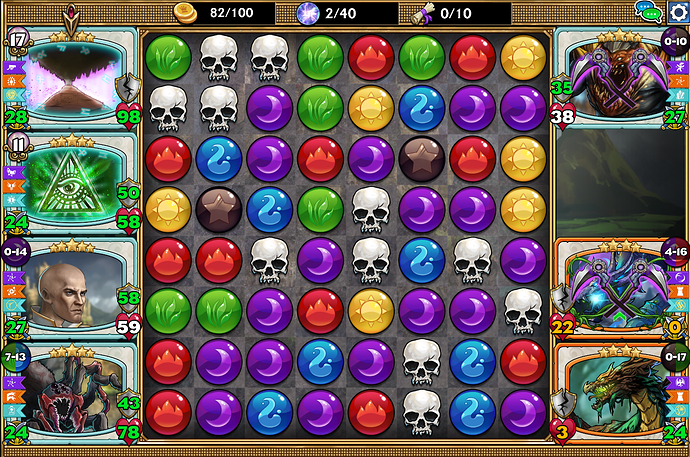 The only thing I could think it might have bugged out on is if it used their Attack as the judge for how strong or weak they are?

It has been my experience that “strongest” and “weakest” targets are always chosen before the damage effect takes place for this weapon. There is a separate issue where multi-component spells that target specific slots or stuff that rearranges the team while causing status effects interacting with on-death summons to occasionally apply the status to the new summon. I think we are seeing a combination of the two here - Gorgotha is targeted by death mark because he is the “weakest”, damage effect occurs, death mark applies to Gorgotha’s slot, which now contains the Ancient Horror. The status could also occur as a race condition in tandem with the damage, which would make the new summon getting the status an intermittent issue.

Ah, I can almost guarantee what this is!

Remember the old bug that had summoned troops come in with whatever status effects were on whatever summoned them, in the case of on-death troops?

Infernal King and TDS often revived with status effects that were on them prior, for example.

Gorgotha was the weakest troop. It saw this, and Creeping Death, on cast, saw spots one and three as the weakest troops. It tried to apply a death mark to Gorgotha, in slot one. Had it been any other troop, you would have only placed one death mark, as CD would try to apply DM on an empty spot. But the spot was not empty, it had a thing in it, so CD applied DM to slots one and three, as it should.

But slot one was not empty. So it applied to whatever was there instead.

Suggested fix: Recalculate the second part of a spell’s effect after the first resolves.

Far easier said than done. But, now we know what it is.