To use the program you need OpenOffice Calc (Apache OpenOffice - Official Download) and a free acoount at pCloud. 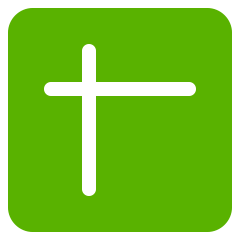 and open it. Afterwards use the pictures to put in the macro at the end of this textbox. Now you can work with the file. If you have questions, feel free to contact me. 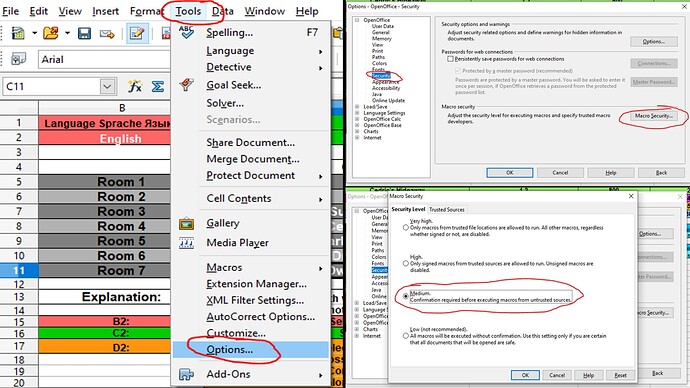 Select My Macros>Standard>Module1>Main and edit it

Copy the Macro below the following picture and paste it at the spot like in the picture.
Press F5 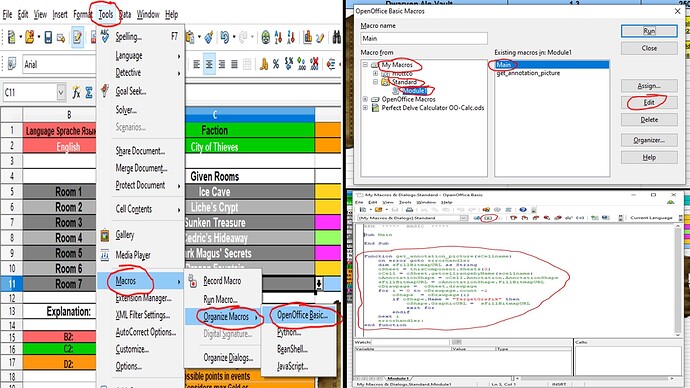 7 Likes
Delves: all about rooms and plans
Zero Buy In Data Request
Zero Respect for Players Time
I need your help with something for everyone
igniteice April 15, 2022, 8:58pm #2

That’s way too complicated for most people. Here’s the general rule of thumb:

Every room has a multiplier that is visible. Rarity is NOT the same as the multiplier, but generally speaking a higher rarity does have a higher multiplier, but always double check, because that is definitely not always true.

The order you do the rooms in matters because your multiplier is added together along the way. Here’s an example:

That’s a loss of 240 points, and if you’ve ever been a couple points off from getting that last reward stage, now you know why! (Always sometimes it really is impossible, and that’s usually in the older delves.)

From my experience and month of testing with my file your statement is definetly not true.

Test it out by yourself before you complain about my work.
My file is for people who want to have the maximum out of their delves. Not more or less.

I will need some kind of 1 page, english walkthru so I can post your link in Library. Easy to see/understand. For reference, here is a 1 page walkthru by dinosuitgirl. 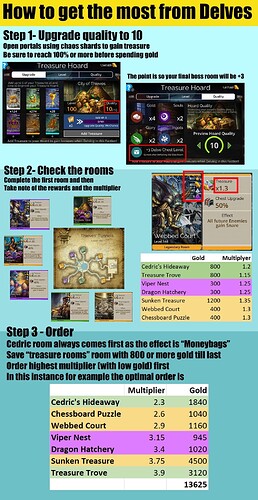 It is 100% true, I used my own spreadsheet from how the game calculates scores and the points match in-game every time.

Whenever you go into a room, you always want your multiplier to be the highest it can be. Sometimes that can mean taking a lower multiplier room first to get a higher one after it, but that is exactly what I said: get the highest multipliers first.

Let’s look at a scenario of two delves. In one, you’d have a straight path from the start to the boss. You can’t change anything about it. In that delve, your score is fixed. In another delve, you can do every single room in whatever order you want. In that scenario, you would ALWAYS want to do the highest multiplier first, then work your way down to the lowest.

Now mix those two delves together and you get delves where you have a few different paths (for instance, Warrens). In those scenarios, you would want to take the path that gets you the highest multiplier faster. So if one direction has a room with 1.1 and then 1.4, and the other direction has 1.2 and whatever after it, it may be beneficial to take the path to get the 1.4 first, then turn around and do the 1.2 path, depending on what’s after it, and what’s after the 1.4.

Let’s look at an example from an actual delve: 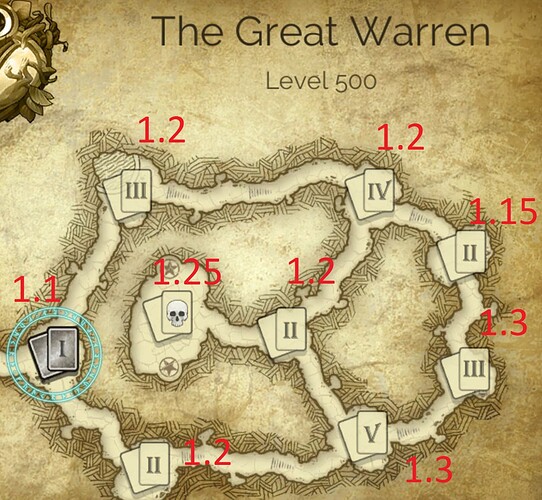 Here’s the best score you can get:

And now the worst score:

At first I have to say, that my calculator isnt just for events and gettin the highest score.
It is also for normal delves after you completed all factions. You can use it to get also the highest amount of gold or glory. Whatever you prefer.
But it also works for events to get the maximum possible score.

get the highest multipliers first.

If you use your method, you wont get the highest score in my example I give you here:

Calculate it in your way and let me know, when you’re done.

As you can see, going for the highest multiplier first doesnt give you the best score

I don’t know what you were trying to prove, but getting the 1.4 room (Room 6 in top left) so late causes your multiplier to take longer to get maxed. They start out the same:

You took the wrong route. It seems like you assume that the path I’d recomment would be the numbers in the picture, but thats just for the settings.

You can see it under “Best Path”

Now make your calculations again with my setting.
You will see that the score will be the same, but my way will give you more gold or glory (whatever you set up).

I’ll give you a better example which will prove that your method, going always for the highest multiplier first, isn’t the the best way.

And here the numbers:

I just wanna make clear that my sheet goes through all possible permutations of all possibilities depending on the faction and on the selections of max score in events, gold or glory and even starting multiplier which effects the outcome as well if you use i.e. city of thieves for farming (which will give you the start multiplier of 0,5).

Your method is good in general and works fine in a lot of cases, but my method grants you the absolute maximum.

Whenever you go into a room, you always want your multiplier to be the highest it can be. Sometimes that can mean taking a lower multiplier room first to get a higher one after it, but that is exactly what I said: get the highest multipliers first.

When I was doing delves, I would always input the numbers until I got the highest point value I could. I never assumed that my first path was the best one. If I did that, I wouldn’t have bothered to make the calculator in the first place.

That’s why I created my Calc sheet. It figures out the best possible way for whatever you need.
Without using a calculator.
Just input the room names and it calculates automatically which path is the best for your needs.

I’m just saying that going always for the highest multiplier is wrong as you can see in my 2nd example.

If you dont believe me, it’s up to you, but my calculator works perfectly, coz it goes through all 5040 possible permutations you can have with 7 different rooms.
Ofc there are way less permutations in factions like Primal Rift or The Warrens, but I included this in my calculator too.

Give it a try and use it by your own. You will see that I’m not wrong. And you will also see, that going for the highest multiplier first, isn’t the optimal solution.

Thank you for sharing this. It’s always really awesome when someone puts that much work into something and shares it with the community!

I might not use it myself to be honest as I’ll probably be way too lazy to set that up but it’s still awesome.

Hey folks
I made some minor adjustments:

Fixed Eldrazhor which had wrong permutation

Fixed Dripping Caverns which had some missing permutations