I assume same for other GW troops.

Sirri-… I mean Luther does come up and mention that stuff has been found in Blighted Lands and Drifting Sands.

It wasn’t in the patch notes, but please let me say TYVM for giving me my 3:2 aspect ratio back! The letterboxed board on my Surface Pro was just wrong.

Hey everyone, I just updated the patch notes with Guild Tasks changes, please have a read through them. 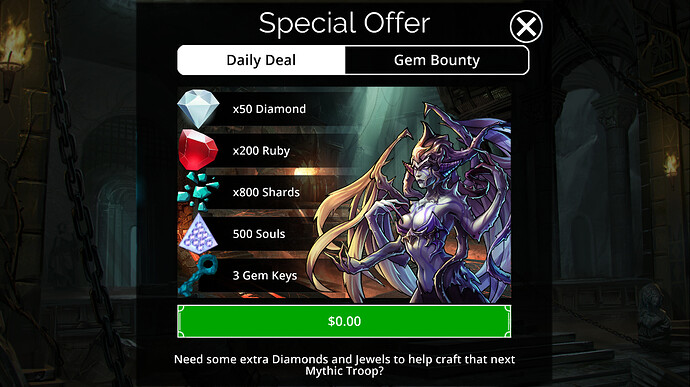 My bug shows the deal as $0.00. Trying to purchase just spins the wheel a few times and does nothing (good for the devs). Even after fighting first boss, still shows up that way.

Sorry, should have mentioned. iOS. Most updated version I believe.

Can we know the old/new amounts of gems and diamonds?

Like the Soul Forge and Boss Battles. I was hoping there’d be a way to forge commons lol,. So we are looking at possibly forging one Mythic a year if you complete all the Dungeons everyday and RNG is on your side, oh and you don’t forge anything else with diamonds. Does that sound right?

Crafting mats have also been added to guild tasks.

You have a chance to get a common when you forge Summon Stones.

We’re looking into why this is happening. The iOS version propagated quicker than normal, so it may be that the new purchase hasn’t propagated through yet.

Some Gem rewards have been removed and replaced with Gem Keys

Thanks for crappy gem keys love them

Gotta say, Day 1 of the Boss battles was pretty underwhelming. Pretty thoughtlessly breezed through them with a basic Maw team. They were playing like they were on noob difficulty too (not taking 4-matches and such). Hoping they get a little more challenging in subsequent days.

It looks like you get the Jewels a lot more than the Diamonds. Hard to do all the math right now but it seems like you’ll have a lot of leftovers for Summoning Stones.

@Saltypatra Now that the Unity update has shipped for PC & Mobile, do you have plans to ship on MacOS via Steam soon-ish?

Worth noting that the dungeons are meant to be accessible for all. So high end players will probably find them semi easy. They do get more difficult between the three you have at least.

First off most of it looks pretty good. Little disappointed that some gems were removed for more ummm…Gem keys??

How about switching it to a 100% chance to get like 5/5/10 diamonds instead. At least that’s enough resources to only take 200 days of saving to get (not counting legendary tasks which only top guilds usually get).