You could saved Hawx a lot of angst if you’d just responded immediately to any one of her pings. Just sayin’…

So, what about the quantity? Killing a specific mythic 10 times is excessive, even for a gold tasks, and this is a silver one. Was this actually supposed to be an entirely different task, like playing 10 battles with the Hellcrag banner?

To me it seems, there is not only something wrong with repetitive tasks during weeks, when a kingdom is kingdom of the week multiple times during one campaign. Also some quantities are strange, first gold task today with 50 battles with Geomancer class is another example. Or is this intended to force players into using the new stuff (class, banner, units) from the new kingdom for longer time?

just waiting for some more questions to be answered in regards to this weeks duplicate tasks!

I’ll answer your question. The issue was ignored.

Ever since Hellcrag was released the campaign tasks have been crazy: 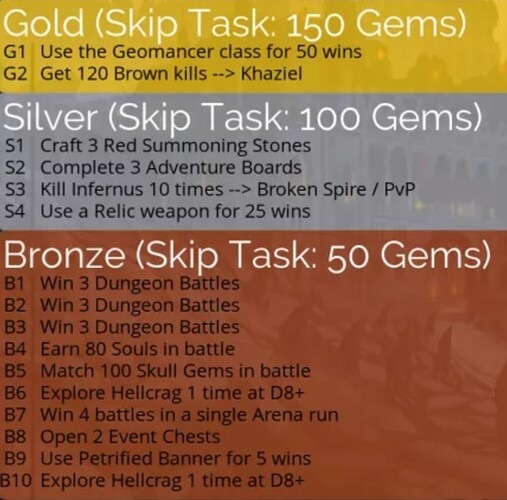 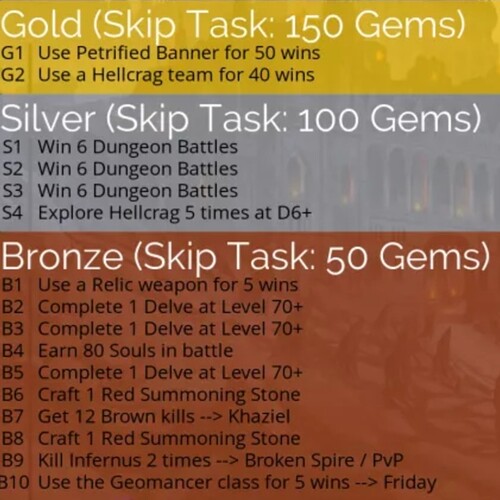 @Hawx, please let me know if I should remove the images above, as they are from your fantastic guides.

please let me know if I should remove the images above, as they are from your fantastic guides.

You are absolutely fine, they are there to be shared so no problem at all.

Quick question: do we know how re-rolls are determined?

Switch is currently on Campaign 7 (Talisman of Wild Magic) Week 2 (Pridelands) and the first Gold task was “Hunt Behemoth 5 times”, but upon re-roll I received a Gold task of “Kill 92 Brown Enemies” and I’m starting to question if that should be considered a “normal” amount?

Admittedly I don’t pay THAT close attention to campaign tasks, but…

I did see dear @Hawx.

But I was hoping maybe to increase attention to this, by also posting. Your post is much more clear and detailed - and as always spot on

Quick question: do we know how re-rolls are determined?

Here’s the list of possible tasks you can get from rerolls. Hopefully the amount of battles helps with your question but generally yes, the reroll is more battles but achievable today rather than being time gated 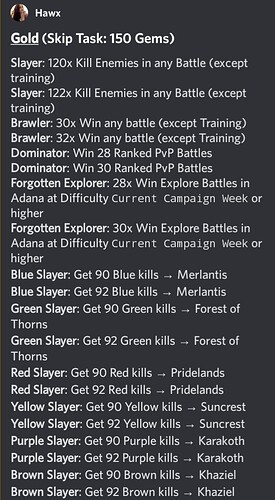 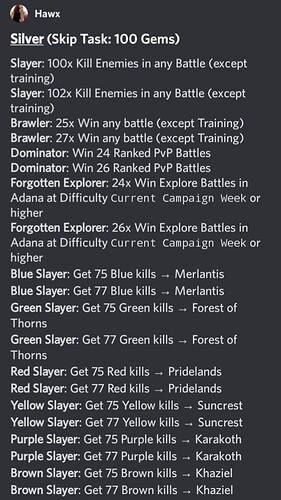 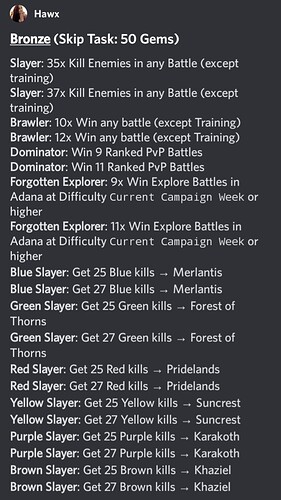 Created with the bot. Use /reroll_tasks

Note, the Adana ones I haven’t seen for a long time, so may need to remove them. Can anyone confirm?

Adana ones I haven’t seen for a long time, so may need to remove them. Can anyone confirm?

Not a confirmation per se, but haven’t seen them in a while either (good riddance)

Here’s the list of possible tasks you can get from rerolls.

I wonder why there’s two flavors for each task, with the quantity always being two apart. Not that it matters much but it looks suspiciously like somebody forgot to clean up after a rework.

Sorry for the delayed reply, 2/3 of CX was out sick last week.

The numbers for the re-rolled tasks look odd to me too, I’ll ask the team about it.

I’ve also added this past week’s repeated tasks to the bug report.

We actually did have code to prevent this after it was reported when Nexus was released so the team need to look into why it’s occurring again now that Hellcrag was released.

I made sure there’s no duplicate Tasks in this coming week as well.

Note, the Adana ones I haven’t seen for a long time, so may need to remove them. Can anyone confirm?

I reroll 90% of tasks every week and haven’t seen an explore task appear in a very long time.

My tracking indicates the Adana Explore tasks were removed in v6.2, and I haven’t seen the PvP tasks since v6.2 or 6.3 (not sure which).

The base amounts are:

So what’s been unusual recently is not the rerolls, but rather that the normal tasks have asked for as much as double the standard number of kills, which pushes the counts above the rerolls. That kind of breaks the logic for rerolls.

My tracking indicates the Adana Explore tasks were removed in v6.2, and I haven’t seen the PvP tasks since v6.2 or 6.3 (not sure which).

I think I’ve encountered that task only once ever so the fact that it specified “Adana Kingdom” did not feel important. I did however appreciate that it was “win # Explore Battles” and not the usual “win # Explore Runs”. It’s like the difference between Adventure Board and Boss tasks: the former counts the board as a whole (i.e. you can do all but one battle on the board before the task pops up, then finish it quickly) while the latter counts each battle individually (so if it pops up between boss battles then that’s +1 day of time to finish).

it’s Hellcrag week again tomorrow and there are duplicated tasks again. I’ve dm’d you with the details and posted on the beta discord too. I know it’s not major high priority with rerolls being available but with it being Guild Wars week, players will be keen to get the campaign boxed off on Monday.

Thanks @Hawx, unfortunately the team weren’t able to change the tasks before weekly reset today.

I’ve made a note of the duplicate tasks in the bug we have for this to keep track of it.

So this week expect the following Bronze duplicates:

I’m very sorry we weren’t able to manually correct these in time.

Also could I please get feedback specifically about how frustrating it is to get duplicate Adventure Board Tasks? I’d like to include feedback about this one specifically in our report to keep it as detailed as possible.

It really depends on the task.

My personal opinion, on a scale from 1 to 10

Also could I please get feedback specifically about how frustrating it is to get duplicate Adventure Board Tasks? I’d like to include feedback about this one specifically in our report to keep it as detailed as possible.

Obviously every task that stretches over multiple days (f.e. win 6 dungeon battles, complete adventure board x times…) or also recurring tasks are crap.
It blocks multiple days in the worst case without you having the chance of further progress.

Sure, you can reroll to get - most likely - another shit task that needs an awful lot of games to finish or you just have to pay the gems to skip…

It is also part of us players not wanting to be “blocked”. If someone wants to play through the whole legends reborn event in one day so just let them. Same with kingdom pass. And obviously the same thing “here” with some tasks. No task should stretch through multiple days.

But if feedback gets reported further - could we please also overwork some ridiculously workloaded tasks that can occur after rerolling?

Also could I please get feedback specifically about how frustrating it is to get duplicate Adventure Board Tasks?

It’s a time gate that prevents the weekly bonus stats of the artifact to become active. That’s especially annoying during Guild Wars weeks, even more so because it’s +2 magic this time.