[Not a bug] Barrier not granted for the Hero - Starting Potion effects ignore the brown matches?

If you get the barrier from a single trait, you should be getting it when you match a brown color from cascades as well. At least that’s how I see it or have it used to be.

Thats what ive seen and expect it to work, but no reliable way to test with potions. Plus someone above claimed the opposite with certainty so

I can anecdotally remember not receiving a Barrier from a potion-cascade Brown match last week, I think, but yeah no way to test currently for me either.

I’m fairly certain when Wild Court delve was released potion cascades did not give barrier either.

The initial explosion cascade could do a lot with the right trait combinations before the match actually started, killing the enemy team before your first move used to hang the game.

We had to do it, otherwise a player using four megavores had a 1 in 1000 chance of killing all the enemies and freezing the game before his first move.

Spent a few sigils to test other traits. And yeah cascades after potion explosion dont trigger them. Maybe the change was made when they fixed the bug where cascades after explosion always give mana to the offensive side? 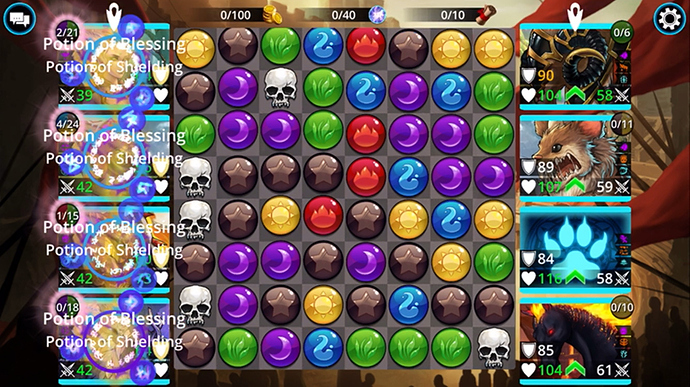 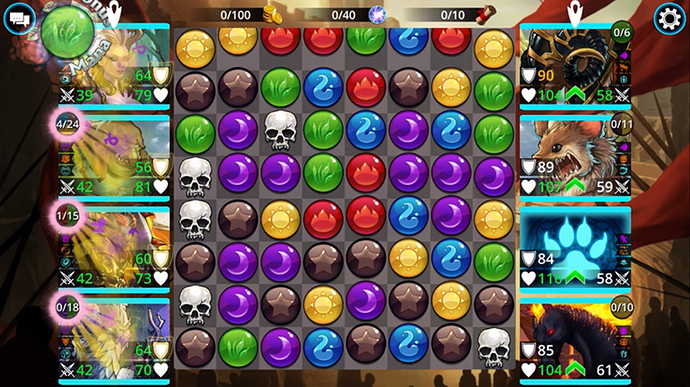 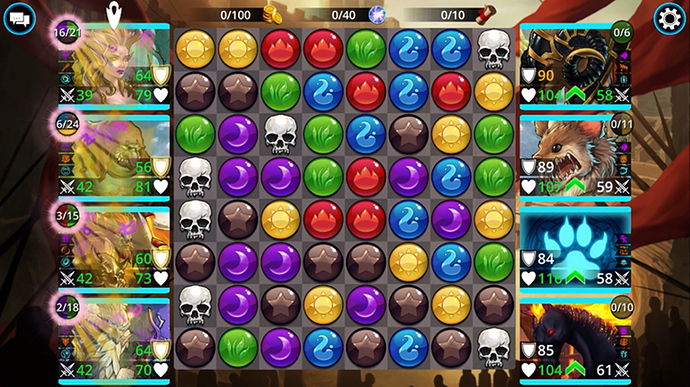 I strongly believe that this was not supposed to happen.
The Rock Solid talent clearly states that any brown match/es gives you the barrier.

Happens to me too every time I play with pots.
What I think is that potions effects occurs at very start of battle before traits are even considered therefore no traits effect (such as links for example) take place. I’m too lazy to verify myself, but a quick answer to this would be playing at 1x speed and see if an empowered troop gets mana filled after or before potions effects.
Up to now I thought it was by design, I don’t remember to have ever been different

Looks like it’s a workaround(hopefully, temporary) for extra turn bug that was quite op, which was triggered by getting 4+ match after potion explosion.

Yeah, could be the case. Still, you can’t fix one bug just to make room for another bug.

@Cyrup, any info about this so far?

Looks like it’s a workaround(hopefully, temporary) for extra turn bug that was quite op, which was triggered by getting 4+ match after potion explosion.

Interesting, and if it is true that the this had to be done to prevent the extra turn from turn 0 explosion cascades, wouldn’t that mean that since Omens explosions do allow trait triggers on cascades that they would allow extra turns? Tested this a few times with hero and 3x Barghast in explore… doesn’t seem to be the case, every time I matched 3 immediately after getting an opening 4+ cascade I’d still drop turn.

Care to explain why this has now been changed to [Not a bug]?

Is this the exemption then?

I know this isn’t your context but some people take this excuse as a valid reason. The greatest trick the devs ever pulled was making people believe there are weird natural laws related to GoW in software development and some things just aren’t possible.

It’s like they told us, “Well, since the toilet has to flush through the shower, I had to make it so if the lid is up water doesn’t work in the house. I’m still looking into if this means if you flush a toilet while the dishwasher is running, the front door unlocks.”

We also don’t know if this even is a bug. We know getting a free extra turn from the explosions was a bug so maybe we aren’t supposed to be able to get barriers from brown matches and other gem matching effects during the explosions either.

Someone asked about this in the Switch discord the other day and linked me to this thread so I updated the title.

Traits trigger based on matches you make, not matches caused by potions.

If so , there should be ingame tooltip telling us about that

Traits/Talents trigger when you match Gems, you’re not matching anything when a potion or enemy matches them, but I’ll pass your feedback to the team.

Traits/Talents trigger when you match Gems, you’re not matching anything when a potion or enemy matches them, but I’ll pass your feedback to the team.

That opens a jar of eyes because I’m willing to bet traits like Mana link trigger when gems are matched caused by explosions.

I also noticed this the other day…for what it is worth. I just figured i was deleriously tired. In my case i matched several turns of 3browns without barrier. I do believe this is a misfire of the trait that i verified later as being enabled. I had a sentinal class hero, non stunned matching browns without barrier triggering. I did not record the rest of the 100 variables that the devs want with a bug report but if i decided to play sentinal again i will watch for this