So is portal 10 in raids easier to achieve then completing towers?

How many tiers do we need to purchase collectively as a guild to achieve it in invasions?

Just a reminder to everyone to please keep the language clean, even if you have strong feelings on a particular issue. Adding inappropriate language doesn’t help get your point across.

Just a reminder to everyone to please keep the language clean, even if you have strong feelings on a particular issue. Adding inappropriate language doesn’t help get your point across.

I don’t think it was me, was it? Or is this just a public service announcement? I thought we were being well mannered and civil.

So is portal 10 in raids easier to achieve then completing towers?

How many tiers do we need to purchase collectively as a guild to achieve it in invasions?

Current numbers - t7x3 for everybody on the guild, then 5 more members buying additional t7s, for a total of 2850 gems on every single member of a guild playing perfectly and then some. What I believe to be the intended numbers, t4 on everyone in the guild (500 gems ea) should just barely get you there with within a fraction of a percent of perfect play.

Thank you so much for all the extra work you put in to help us all out! I really appreciate this and can discuss with my guild our plan of action this week, thank you!

Good, because there is a lot to discuss here and I’d like to carry on, keep it clean people! Thanks.

Sure it was rigorously tested… someone in the office booted up the game and played for 4 minutes, it didn’t crash since they’d only gotten into daily collection, and then they turned it off. Job well done…

The guild rewards taper off significantly after Stage 7. Learning from last week, we are.going slow. I am doing an experiment using Tacet’s black beast deck to see how far you can go without buying any Tiers. The rewards are quite good if you can make it all the way to 4 towers without buying anything from the shop.

This thread has a lot of great points in it

Title says it all. Am I missing something it appears they are basically a carbon copy just forcing different teams for the player to use as the attack team being the primary difference… Costs for tiers, sigils etc. all seem identical… seems very much another pay to win - poor reward structure same as the raids. Guess they didn’t have time to make any changes from all the suggestions made for the raid content…

For my first day of towers I went with firebird, giant spider, firebird, forest guardian. Dragon banner. Fun and quick and I’m sure as it gets harder I’ll have to switch up, but for day one that was fun. I bought tier 4. Won all matches and birds. Tower level 70 and 48 defeated.

Thanks for sharing this. I was planning to try a similar team … glad to know it works. I am doing an experiment to see how far you can go in invasions without buying anything from the shop.

I don’t know which topic this should go to, maybe both.

Tier V of the shop should be modified a bit. Currently it gives:

So for 100 Gem difference, Tier 5 gets… 250 souls, 1 sigil, 2 really random troops, 6 minor traitstones. (also swaps 4 Major Traitstones and 4 Arcane Traitstones for 1 Celestial Traitstone. We’ll call it even, but I see it as a loss)

That 100 gems difference doesn’t feel like it gives anywhere close to enough.

I’m in the mood to play more Invasion, but I just can’t pull the trigger to pay for such a mediocre tier.

Honestly, it’d be nice to skip Tier V and Tier VI.
Or… just rework the entire shop in general.

So today it was a little tougher so I beefed up my team.

Works well and only lost top troop once. I’m at 95/120 with the towers right now. 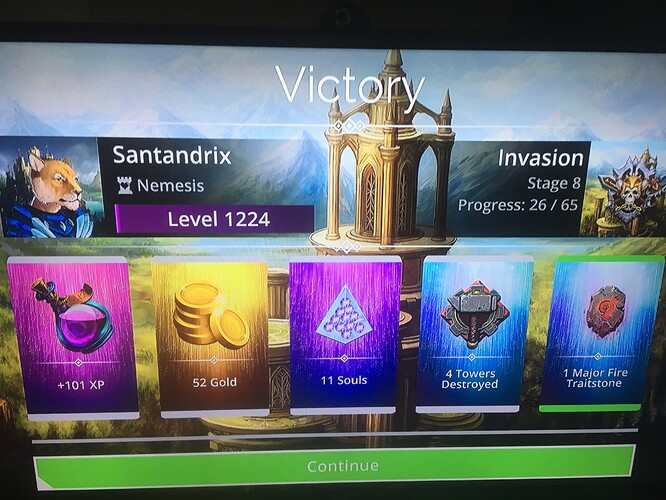 @Satandrix If you haven’t tried this group yet. Give it a thought. I use it with great accuracy. Sure not a paid player just the normal sigils. However, I do see it doing well overall.

start (when there is not 4 towers) :
Stone-Shaker
Forest Guardian
Aurora
Kerberos (or dawnbringer if you prefer)

end (when there are 4 towers) :
Stone-Shaker
Forest Guardian
Aurora
( add in your preferred missing color troop here , even dawnbringer )

I largely depend on the big guy to do everything. So I shield and buff his life a lot. And I rotate the shields around. If you include dawnbringer then its 3 troops pushing up shields to mitigate any damage that may come out.

As per Invasion feedback. I’m just underwhelmed honestly by the 2 new modes. It seemed neat to a degree when it came out with Raid. And just recycled into Invasion. So Invasion didn’t have this whole ‘wow!’ factor as new things tend to do with me. More like ‘this again’ kind of feeling. They really should have started the new modes with Invasion first, then followed with Raid. I would have enjoyed having this fresh feeling with Invasion over Raid. Not to mention I think one of the modes should be removed. 2 new modes both fairly similar. They need to pick one and go with it. I will groan if they decide to duplicate this mode more than these 2 times into other modes. Or toss a book at my tv. One of the two.

Everything about them is pretty much the same even if troops are kingdom in one, and type in another. The only real change is the boss or bosses. With Invasion you get the inclusion of towers moving into the battles until you see all 4. And unlike the boss in Raid they only use 2 colors, and can not 1 shot your troops. So really feel less stressed at points in a battle. Raid boss caused a lot of issues with me having fun honestly.

Some more feedback after completing the event:

I coasted through this event on my main account while barely trying. Only bought t3, but I was able to brute force my way through every fight because they needed a double-tap to kill me from full, which isn’t hard to manage when you also have heavy board mod and barriers.

My alt account had a bit more of a rough go since I don’t have the resources to trait Stone-Shaker and while I have a Forest Guardian, that is also untraited. Also my Stone-Shaker’s stats look like this: 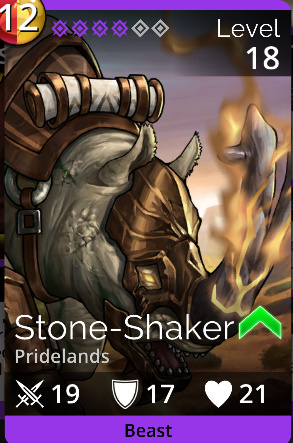 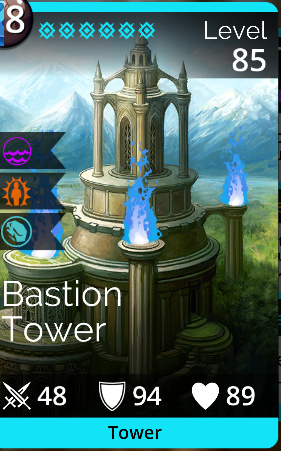 I was able to do a no-loss run to the citidel, at which point things got dicey with pretty much everything being a one-shot on pretty much every troop I have, but I could crawl forward putting the hero with Mang and using a looping skull spam setup and replacing the fallen hero with a spider. Would have been easier if I made the hero a warden so he lasted a bit longer with the barriers and the beast buff, but after winning like this a few times I decided it wasn’t worth it at this point. I could keep playing, as this was probably the most enjoyable either event has been, but since we aren’t anywhere close to the next reward tier, I probably won’t since the battles are so long (something that still needs to be addressed).

Heres the team for reference. 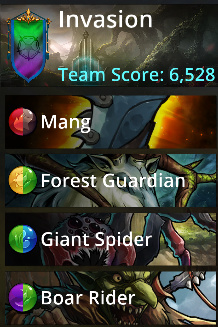 I feel what I was experiencing on my low level account is about right scaled up to a high tier purchases for endgame. I was looping and using barriers, but it wasn’t “easy” I had to be careful, think a couple moves ahead to extend my loops, and with all that I had the tools I needed to fight things much, much stronger than me. Hero is a two-shot with skulls, but basically any tower casting would end me without barrier up. The problem here, of course, is not every week is going to have something that can barrier, certainly not as easy as Forest Guardian (there is always technically dawnbringer, but that isn’t an option for so many people). Towers have way more forgiving scaling than raids, so losing my Mang in the above team meant slower-going, but not basically “give up” because I couldn’t even appreciably damage any of the minions. When things have scaled that far above you, though, either way, managing barriers or looping is absolutely essential part of being able to make progress. Without extra-turn barriers as a part of your kit on the table (and no, dawnbringer does not count in this instance) and/or the ability to loop entire teams to death, I feel that these, too, will be too predicated on stat checks and RNG to be enjoyable.

I think raids and invasions both need to take a step back and examine what the “core” of their mode is supposed to be. Each one gives a specific task with a specific set of restrictions. I do like team building restrictions and taking some of easier converter loops off the table is essential for modes like this to maintain a bit of variety between the mode every time it appears is, but I think the categories they have been placed in are simply too arbitrary for a consistently satisfying experience in either mode. I wouldn’t want, for example, Suncrest as a raid kingdom or Stryx as a raid type for either of them, because they are all too straightforward, lack board mod, and are low scaling that I’m basically relying on the few things my hero does well to carry the entire battle, and you can’t use good play to overcome the scaling.

This could be mostly solved by the hero actually having a complete toolkit to competently perform in any given role that the kingdom or troop type is missing, but there are certain weapons already too essential to the process to make up for an entire kingdoms lack of being able to bring anything to the table in either mode, and the godslayer/siegebreaker don’t really adequately fill this out either.

tl;dr: I have a feeling a large part of what made Invasion tolerable was the powerful kit we have this week. I don’t want to play either of these modes without a consistent and reliable way to board mod outside of using the terrible, terrible hero options. Being able to take hits by managing barriers is also a key element that gives it a puzzle-like feel and allows battles to play out with some give and take when things scale up. Every single event needs to be tuned so that this type of give and take is possible, but sticking with troops types and kingdoms with one or two lackluster new troops, they wont be.

Oh, and the event weapon is still terribly designed. Still a potential game-loser when you get into the main meat of the content, and robs you of your occasionally essential hero weapon swing slot, but more useful to brute-force through early rounds a least. Suggest, again, that these have double damage to towers and bosses at least, if not triple.

My feedback on invasion, we hit portal 12 on Friday so thankfully I was done for the week with them. I think next time our big spenders will spend less as we figure out how much we all need to get the portals fairly between the guild.

All In all, it was a fresh take on a older game and it was a nice change up, but the rewards aren’t very rewarding so I was having more fun in pvp and explore, looking for gnomes.
I think gnomes ate my new favorite part of the game.

Are the numbers right for the invasions? It seems lower and like our guild finished all of the stages rather fast?
Was this intended?