Let’s not lose this thread to silly memes.

On-topic: @sirrian @nimhain do we have any stats that might bring some perspective to this discussion?

Let’s not lose this thread to silly memes.

I fear you fight the tide, my friend.

do we have any stats that might bring some perspective to this discussion?

I’d love to know this, too but this isn’t the type of information most developers give out (though Sirrian sometimes surprises me).

Everything is relative. It really depends on the exact question being asked.

I’m in agreement with Jainus on this. Any system that is implemented under the assumption that the #31 guild is only mid-tier will be heavily skewed towards the end-game, heavily-driven, population of players.

Edit: I know that there are at least 4,115 guilds; there was a thread recently that showed that number as the breakpoint where guild rank became lower than the number of trophies earned. There are likewise no fewer than 30,000 players, since getting to PVP tier 1 every week – and no further – used to earn me about that rank by the end. And I am the most active player in my guild; if my experience is average there are 2-4 times as many casual players as regular players, and vastly fewer active players.

Total guilds is not important; total active guilds is what’s important and only the Devs know what that number is. Its certainly only a fraction of the total guilds but whether that fraction is 75% or only 5%, we have no way of knowing.

am i the only person who is still not sure when a person is counted as daily winner and when not?

This is from Sneak Peak II 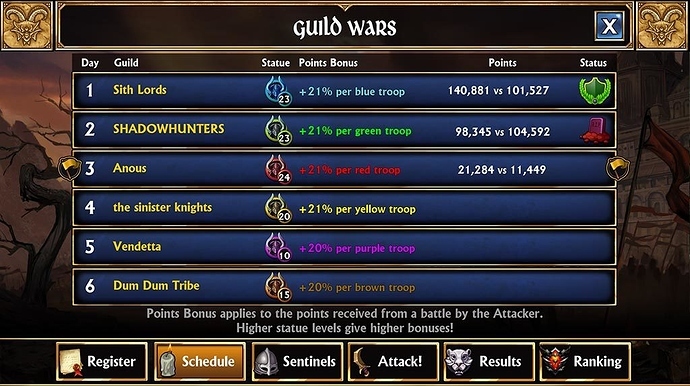 I’m going to assume that the guild the player is a part of is Sparkle Ponies.

Day 3 is still in progress, but assuming Sparkle Ponies does win (as they are currently doing), they will get another 24 hour xp buff, and more seals.

Hopefully that helps clear it up?

now to proceed with questions, does it mean the respective guilds Sith Lords and Shadowhunters were fighting back?

if not, what was the victory condition? a point treshhold?

if the guilds were fighting back, how are guild selections done? does it mean we dont get to choose enemy guild we are going to fight against?

I assume both guilds attack each other, and the guild that racks up the most points in their attacks win. (Worth noting that each day has a colour, which can affect the amount points you get). So on Day 1 Sparkle Ponies managed 140,881 points compared to Sith Lords’ 101,527, meaning Sparkle Ponies wins.

does it mean we dont get to choose enemy guild we are going to fight against?

hmm if we dont get to target specific guilds, rivalry will be very limited and a portion of guild war flavor will be missing

i mean normally there is slim chance that both guilds would want to target one another, so its either neither guild can target or they can target but then guild doesnt fight back…

I believe the matchmaking will be based upon the guild’s over all ranking in Guild Wars. So the teams at the top will more often than not fight each other. Rankings are adjusted each week based upon your guilds performance for that week. Though we’re still waiting for more information on the rankings side of things.

More details to come… But there are some bonuses applied in the rankings system - they’re not just a points tally of the points from each battle - so fighting higher ranked guilds will push you further up the rankings, in such a way that the best, most organized guilds should bubble to the top.

i hope guild leader will have at least a minimal influence on the matchmaking (if not specific, maybe choose: “easy” “medium” or “hard” type of enemies, while the actual enemies would be choosen by system?)

i mean it would be more fun to have some kind of control over this especially if indeed:

so fighting higher ranked guilds will push you further up the rankings, in such a way that the best, most organized guilds should bubble to the top.

Which will be given to the same guilds that have been dominating the current lists just becaus they consist of 30 nolifers who play the game 24/7 lol.

My guess would be no, since it would require the guild master to be online the day before matchmaking is done. My guess is that you will be matched with a guild that is +/- 5 ranks from you, or something like that. The assumption is that if you are higher you “should” win, so the reward is slightly slower if you do, but if you’re fighting a guild higher than you the assumption is that you “should” lose, and so if you do win, you get a bigger increase for the upset.

In a perfect world every guild would be able to beat all the guilds lower than them 100% of the time. Now of course this will never be achieved, but that is what the system strives to achieve, which is why fighting higher rank guilds will push you further up the rankings.

Which will be given to the same guilds that have been dominating the current lists just becaus they consist of 30 nolifers who play the game 24/7 lol.

@Sirrian has mentioned that ALL participating guilds will get the rewards, just that the higher rank ones will get more of them. So no one will miss out on the troops. The top guilds will just get them to mythic sooner. (which likely won’t matter too much if they are similar to guild guardians, but the debate on this has already been hashed out further up)

the problem may raise if one of the guild war units will be needed to proceed more magic bonuses, or in general the 3x stat bonuses - in such cases the top guilds that wil and unlock the 3x will keep on winning more with the bonuses, creating small wall between the 2x and 3x players

the problem may raise if one of the guild war units will be needed to proceed more magic bonuses,

@Rasper already showed much earlier in this thread that one copy of a Guild War troop will be just as effective at getting new Kingdom Power levels as getting it to Mythic (assuming every new Kingdom launches with 8 Troops).

In regards to Kingdom Power, just existing and being traitable is enough once you get beyond PL 5.

how many Guilds are there?

I know that there are at least 4,115 guilds; there was a thread recently that showed that number as the breakpoint where guild rank became lower than the number of trophies earned.

Small correction, the insignificant number was 4155

(it was me who posted that thread).

Total guilds is not important;

True, so for what it is worth (not much), when I started my guild about a month and a half ago, I seem to remember the start rank was something with 18k.

what’s the distribution of member numbers?

I have no statistical data, but I can give my impression after working the ranks from 18k up to current 4k.

Very rarely has a guild over 10 members. I would say the huge majority of low-ranked guilds have 1-5 members, a few even 0. Once in a while there is a low-ranked guild with over 20 members.

Around rank 4k most guilds have reached the max member limit (30), but the big majority of guilds still have a single-digit number of members.

Haha I was wondering why my text was bigger. I chalked it up to a “my post is short so they tried to fit it to one line”. Didn’t even notice the hashtag disappeared.

It’s further complicated by the fact that on this board, it’s not a hashtag, it’s markup. Specifically, it makes

@Lun basically took the answer out of my mouth but to me, it comes down to whether or not you want to count the large contingent of guilds that actually aren’t guilds at all. Like 80% of all the guilds that exist aren’t even trying.

So while it may seem like #31 has much more in common with #3 than with #300, there’s such a wide gap (in terms of perception if not performance) between #3 and #31 that there’s no way you could lump my guild in with the real top guilds.

If that were the case, players wouldn’t be using us as a stepping stone to get to those top guilds.

Yeah and let’s not act like guilds that are lower than the top 100 are even on the radar(just being honest), and then you have a subset within the top 100 of who is actually active enough to qualify.

I mean that’s just truth. If you’re a guild below top 100, you’re either a guild that just started out or you fall under not active enough.

I mean I believe we’re getting to a place where the top 200-250 are active, as I’ve spoke about, but it’s taking time to build up. Guild Wars could help move that along faster though.