The Gnome-a-Palooza update is due out very soon. To help you understand what this actually is, @Hawx and myself have created this handy quick reference guide. Happy gnome hunting 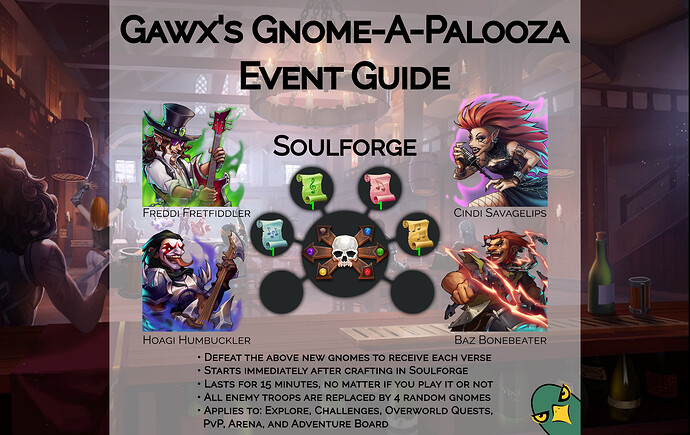 After release, I’ll add a short video into the thread as a bonus

Great but you are missing the except Cedric, pet gnome only in PvP

Any word yet if it really got introduced as broken as previewed? Should we start farming for mythic troops like crazy before they shut it down again?

I can see what the meta’s gonna be.

Not sure I follow? Won’t you get more gold and faster battles from explore?

Hear me out on this. You use explore to farm the verses and once you stockpile a bunch of each verse, you craft four at a time(so the timer will display) and start farming Arena once they fix the double skull damage bug on x4 speed. At that exact point in time, with as many types of gnomes as there are, you will have access to every single farmable resource in the entire game during arena runs, including trophies, which at higher VIP levels, are easier to obtain in Arena as the battle-to-trophy ratio will total to more than 3 per battle, making it so while you can maintain 6-0 records eveey time as WELL as having to fight fewer battles to get to that point, you are going to have the most efficient overall resource and trophy gains in the entire game.

This event just cratered the resource meta AND the value of many resources as all Explore becomes now is the fastest way to acquire the verses and Arena can finally become a viable mode for resource acquisition.

The only way Explore would be faster is if they didn’t change it into the system they use now way back when, as you would have an unbroken chain of battles instead of four and a miniboss. The resource gains at that point would make it so that this event would have to be rotated in and out like the Vault Key event.

I’m honestly not sure that playing against 4 gnomes in arena is easier or quicker than playing normal arena, although I guess without traits they are easier to take down, and there’s no pet gnome so no summons.

Each to their own though.

Well, the only spell effect that would be mandatory is schlorping their mana so they can’t run, but hey, once someone tries it, they’ll see just how powerful this event can be.

“While Gnome-a-Palooza is active, 4 random Gnomes will appear in all PvP, Quest, Challenge, and Explore Battles.”

From update notes on Steam. No “Arena”.

This event just cratered the resource meta AND the value of many resources as all Explore becomes now is the fastest way to acquire the verses and Arena can finally become a viable mode for resource acquisition.

It’s going to crater the whole guild system. If you run Gnome-a-Palooza in Explore battles you can generate resources at a rate that makes participation in guild events a complete waste of time, barring Tower of Doom for forge scrolls. They would have to increase rewards (including those from normal/epic/legendary tasks) by at least a factor of 10 to remain remotely worth persuing. I really wonder how the top 500 guilds are going to adapt if they keep it this way, drop all requirements so members will stay?

Has anyone found any of those new gnomes yet?

Has anyone found any of those new gnomes yet? 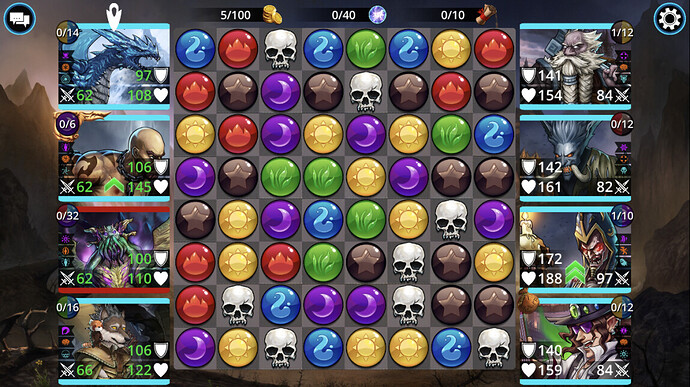 Family guild members found one already after a bit of playing. Going by the stream preview appearance rate might be around 1 in 10 gnomes.

Great thanks, I’m gonna do some practice explores for the weekend, too afraid to play anything else and too impatient to change the speed!

During vault weekend I believe we can expect around 1 in 6.74

I only have limited data on this

Yes, this. Gnome crashers aren’t quick to defeat in Arena. I can’t see how spending valuable G-a-P time in Arena would be worthwhile given how slow the battles are.

Assembling a new team for every run will also eat away those precious seconds.

Even with a super noob sunbird, imperial jewel, firebomb, firebomb team you can still get over 130k gold 80k souls and 20 vault keys in a 15 min run on explore 1