I’m the only one who is seeing that?

Is it a false announcement? If no, when will it begin?

It’s real, and coming in the next day or so.

Something to replace the Legends and Mythics that were removed from the forge!

Why the MAJOR STEALTH NERF to FORGE?

@Nimhain @Sirrian Isn’t this a downgrade of the Summoning Stones? I thought people were posting Legendary and Mythic troops they found with the Summon Stones before? Now we can only get common to epic?

Why didn’t you spend your time fixing the crafting Mythics with Diamonds? This would have been a much better use of time. We don’t need more commons!!! OH, I get it! This is another STEALTH NERF to prevent players from getting any good troops from the Forge!!! Wow! Very sad…

It’s real, and coming in the next day or so.

So PS4 are doing “12 deals of Christmas”, now GoW is too, and I’m sure I’ve seen it elsewhere too.

As there seems to be some confusion, I’d like to point out that the 12 days of Christmas are the 12 days AFTER Christmas. This culminates in 12th night, which marks the end of the Christmas season. The period before Christmas is “advent”.

For once they’re not taking things away from us, rather giving us stuff. Please don’t do this

But… but… my pedantry!

Shush your pedantry until after Christmas. Then ask the Devs to compensate for their oversight!

I’m expecting a big fat pile of Gems to make up for the massive nerf to our ability to earn them through gameplay coupled with the increase in ways to spend them.

A mythic troop of our choice would be nice too!

Your shtick is real tiresome at this point.

On the first day of Christmas… 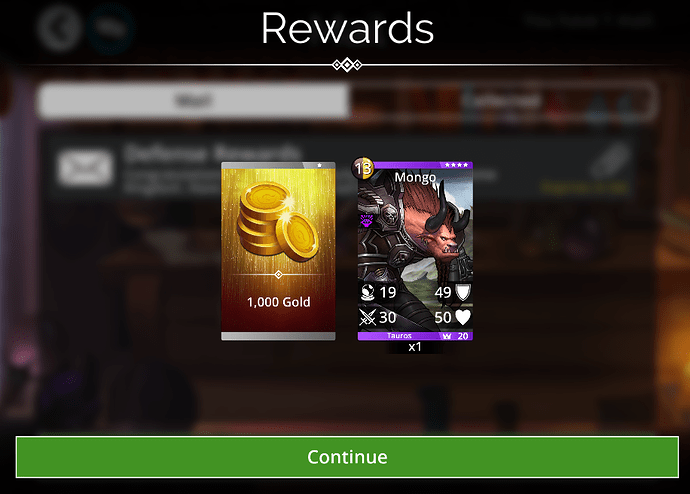 Great gift for those who needed more Mongos.

I feel unworthy of this generous gift

(Seriously though, thanks, freebies are always nice, even if I’m very unlikely to ever use Mongo

It was said in another thread that you need to get a new troops that you don’t have yet for the achievements for troops you already have to register.

Thanks from me for the free Mongo as well!

Hope the particles get deactivated soon so that I can return to playing and working on leveling and traiting my troops, including the Mongo.

It might trigger next time your hero levels up.

Edit: It will definitely trigger the next time you get a troop you don’t own yet:

As mentioned in other threads, we are currently using a similar system for awarding achievements on Console as we are on Steam and Mobile. This means that to abide by the rules provided by the console manufacturers (who are a lot more strict compared to Steam or Google/Apple), a specific action must be performed to award the achievement. In the case of Troop achievements, they will unlock when you receive a new troop, but unfortunately not when you get a duplicate. These achievements will show u…

On the 12th day of Christmas, Krystara gave to me, 1 PHAROS-RA!

One PHAROS-RA who then resurrected the old UI!