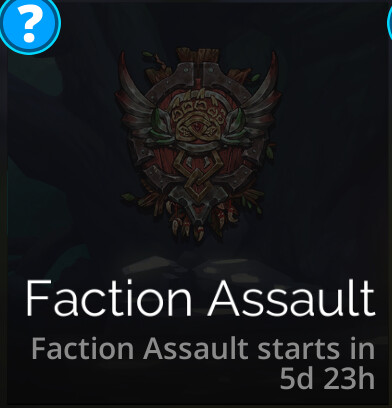 What you were expecting to happen, and what actually happened:
I was expecting Maugrim Woods kingdom week to run its associated faction, Hell Gate. Instead, current scheduling shows the upcoming faction to be Werewoods, which belongs to Urskaya.

Thanks for posting this as soon aa it was in game! I’m going to be really irritated if hellgate isn’t properly slotted next week.

I really hope this doesn’t get buried. I’ve been saving gems for the handful of factions I’ve yet to finish up, and this feels intentional, considering the average hoard level needed to complete this one outside of a faction assault.

Do not change it. I need Werewoods, not Hell Gate.

That’s hilarious. I remember back when the faction was being released, everyone said the faction is showing up under the wrong kingdom, it should be Maugrim Woods instead of Urskaya

But the release plowed ahead with it in Urskaya. Now it’s showing up under Maugrim Woods at least in some capacity, showing at least somebody on the dev side agreed with the collective common sense.

I feel like Maugrim Woods was one of the kingdoms getting close to having power level 20 available, at a time where they weren’t ready for that to happen. The game was definitely rounding that corner at the beginning of 2020.

That said, Werewoods troops are from Urskaya, and unless next week is an Urskaya week, the faction should be Hell Gate

We had an Urskaya week in October. We last had a Maugrim Woods week in May. Skipping a faction at that rotational speed would be evil.

I’ve pinged the team to ask bout this.

I do not understand why Werewoods is classified under Urskaya either, but at least Hell Gate has lore claiming it is the realm on the far side of Kerberos’s gate…

It’s kind of like asking why Dripping Caverns is under Grosh-Nak, or Fang Moor under Khetar.

Any news on this? @Kafka

I hope gets fixed

Please fix, we care about the future of gems of war, xbox

Thanks for the fix!!!