Today I saw a video that revealed that the dungeon doors are not truly random.

There’s a bit of extra nuance of what can be where once you start opening doors. It is easier to check the tool out for yourself, not sure what the forum rules on sharing links are so I’ll just say check out Sinnycool’s channel and you’ll find it.

I’m really upset about this and considering quitting the game because of it. Not because it’s not truly random, but because people complained in this very forum and there was an official response and still they did not say anything about it not being random and maybe we should try different strategies.

But for those of you who will continue to play (and maybe me, we’ll see…), figured I’d get the word out.

GoW Dungeons: The Hottest ARG of 2022

Watched video. Tested the tool on previous results. Tool gave a door 0% chance, when in fact it had a boss behind it.

To be sure, I put the results in exactly as I played them, which meant that my third pick gave me a trap. (The tool would not have advised against this third pick.) But if the tool worked as it should, a 3rd door trap should not cause it to fail completely on the fourth door.

Nevertheless, if the doors are truly random, it does not hurt to test the tool on the live game. So I’ll see, in the upcoming weeks, if it appears to increase my chances of a good result.

Do you have a picture of your in-game layout? 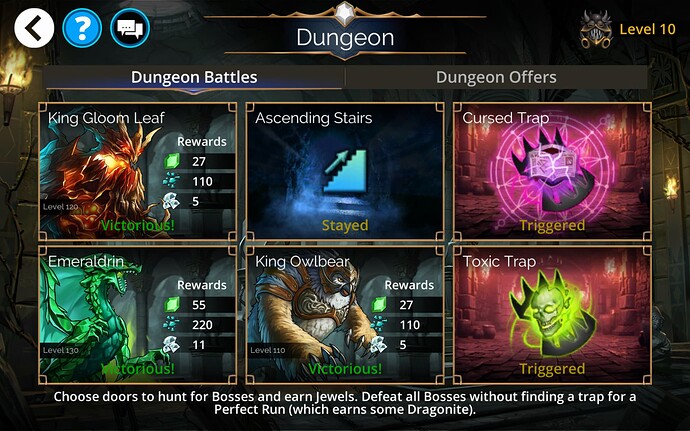 Thanks, what order did you pick the doors?

But I just tried it several times again, and it does not do that.

So either it’s freaky as all hell, or I made an input error that I haven’t managed to replicate.

Given my fingers, input error seems likely to me. Glad you asked about it! I should have been more cautious before offering my assessment.

It happens! At least you know now.

The tool is basically just an easy-to-use UI for what data gathering has stated is or is not possible.

The dungeon can’t be changed by the player, but as long as it continues to follow it current patterns, then there’s either a programming fault in the tool (which can happen) or a user input error. Worth checking either way.

If you want my opinion, I believe after you picked Dragon for 4, you may have entered Mid-Boss for 5 instead of Low-Boss.

at that point, 3 giving the cursed trap would lead back to that 0% chance on 1 in your 4th door.

After we started sharing experiences again due to this post, a couple of guild members reported traps in door 4 (lower left) today. At least, if we all were counting in the same way.
Might be, that the pattern you spotted is not there.

I got fire trap listed for 4 in guild chat at least once. Like I said, not completely sure, if all of us are counting it in the same pattern.

Wonderful to hear that there’s actually some skill involved in picking doors! (or downloading the tool instead if that’s your jam)

I’ve been picking the 4 doors on the left from day one and have had far more than the expected 10% perfect runs, thought I was just being outrageously lucky but that totally makes sense now.

Give us screenshots, please

Of the chatlog? Sorry, it did not happen to me, so I don’t have anything visual to offer.
I asked once more for confirmation later. It was a fire trap in the bottom left room. Happened to another guild member as well. No general traps in 4 so far though here. Maybe it’s the other way around than what Voq stated?

[Edit:] Just reread the starting post. Yep, it says so there too, no general trap in 4, no day trap in 5. I guess, I did not pay attention to this at first read, because I was not aware of the distinction.

[Edit too:] Just when I thought, I got it, another guild member reports a silence trap in door 5…

If this finding is true (and we assume all 6 doors are otherwise chosen by a fair RNG prior to opening any), then I’d be interested in seeing a math analysis on that line.

You can find a lot of analysis in this thread: New Dungeon Screenshots & Discussion Thread. You don’t need to scroll through all the posts, just some of the newer ones.

That’s where the findings came from.

OP -
Amendment required for the last sentence in the second paragraph. I assume this should read “top right”

Well, as of just a few minutes ago, the doors are supposed to be truly random.

This makes me wonder just how many events that are supposed to be truly random are, in fact, similarly buggered up.

if you want to go really far down the rabbit hole, remember all of those posts by different random people that kept saying “Mystic” odds are rigged?

I wonder how many people remember Epic Vault Keys when they first came out.

I don’t recall either because I played very casually for a couple of years and didn’t pay any attention to such things. But I do know that gamers are always mighty suspicious of RNG in just about every game that relies on it (especially when $$ are involved). This instance suggests that it’s just too easy to code unintended patterns… Unless the devs did intend a pattern and just didn’t expect a whole internet community, including coders and math brains, would solve it so quickly.