It only seems doable because we had a Vault Event with a celebratory Cursed Gnome increase. Now imagine you started after that, or missed it because it’s the holidays.

I am annoyed because there was supposed to be a 14 days celebration of the Cursed Gnomes. Can’t see any. Got a few during the Vault event tho outside the GAP. It feels like something got turned off.

All the gnomes were boosted during Vault so we were much more likely to see them then.

(I’ve recalibrated my expectation to “as rare as verse gnomes”, i.e. not worth the effort of grinding for specifically but a nice bonus if one does pop up during normal gameplay. But still, hrrmph: not a celebration.)

This is far from a “Celebration”…

Kinda the opposite if you ask me, a kick in our full bellies of xmas food…

I am about to go up in the air, so angry…

Our job is to keep a positive flow over these boards. Don’t whine or complain - be the better person. You are allowed to come with good constructive feedback/suggestion tho. Just let me know here if you wanna take part in this, or if you already have obtained a positive petras mindset. It is never too late to change your attitude. MEMBERS OF THE POSITIVE PETRAS FROM THE BOARDS: Boss - Eika @Sherby74 @terberos @Whiskeyjack @Crow @Snooj @Tresk @Elenora @jpraveensn @Sassy @Macawi jun…

You need to resign as the leader of Petras. Make a new one, Team Ketras. Sounds tough. If Devs don’t deliver, they are in danger.

I’d probably steer clear of alliterating with Ks, though

PP isn’t the best, either.

interesting, so as @Shimrra already posted:
on vault events the vk drop chance is an additional one, not a multiplicative one?
so, we were all wrong in the past of thinking it is a multplicative one?
is the spawn rate of gnomes (players think of double or triple chance) on vault event also an additional one?
and is the spawn rate for curse gnome also a fixed one?
like 0,1% and now increased to 0,3% or sth.?
then just fix the base spawn rate or just begin to tell the truth or just stop posting these nebulous informations, say it clear!!!

Two things you will never get from gow devs, working code and clear answers!

Well a cursed game since the Arachnaean Weaver debacle. No new years resolution I see to come clean and offer complete and fair compensation. GoW - your sin will not go away- you will get reminders- constantly - caveat emptor- 2022.

so @Kafka when you are informing us about increasing spawn chances for curse gnomes or for gnomes in general on vault event, you always mean additional chances?
and when you raised the curse gnome chance from for example 1% to 1.5% you actually add an additional 0.5% chance manually and inform us like this?

I understand people wanting to raise the rates, but this is a bit far-fetched. Cursed runes are meant to be a really rare resource. They’re meant to be slowly accumulated over a long period of time, just like most newly-introduced resources are throughout the majority of the f2p genre. The devs will eventually loosen the bottleneck, just like with deeds, chaos shards, imperial deeds, vault keys, etc.

I don’t mean to bash you or be rude at all, and I understand the frustration of those who have grinded for ages and not received much in return. Suggestions like this, though, namely raising the appearance rate of a purposefully bottlenecked resource by perhaps around 5000% and making it viable to get 100 cursed runes per day (enough to upgrade the Soulforge several times starting from level 10) is simply absurd. Suggestions like this are worrying because they contribute to the well-established theme of the devs not taking our suggestions seriously.

I admit I am lucky to not experience FOMO for this game. I don’t feel the need or desire to have 100% of the game finished as soon as physically possible. I am fine with slowly working towards the ever-moving goalpost and finding personal milestones. I am aware there are many on this forum who don’t play that way, and that’s okay, but I want to point out that f2p games prey on that kind of play style - players like that are their target audience. The entire point of bottlenecking is making FOMO players want something so bad that when it’s available to purchase, they take out their wallets as fast as possible.

TL;DR: This kind of resource bottleneck is normal in this genre of games. It is to be expected. Instead of making suggestions which not only would allow players to complete their Soulforge within a week or two but will also be laughed at by the devs and tossed into their Reasons Why We Don’t Listen to the Community Bucket, let’s be patient and either slowly grind or be ready to open our wallets.

Asking for a rate increase is totally fine; suggesting to make a new bottleneck resource obsolete within a couple weeks of its introduction is counter-productive.

My numbers for this week:

+1 to all this; and as I mentioned above, recalibrating my expectations to “about as rare as verse gnomes” has helped my outlook on cursed gnomes a lot.

That said: when an item is this rare, a small boost in the rate isn’t particularly noticeable. In the aggregate data, yes, sure. In individual experience: not really. Finding 3 a week rather than 2 is a delta that is down in the RNG noise. It’s simply not a benefit that’s visible to most players, and as Eika and I noted it certainly doesn’t feel like a celebration; messaging it as such just sets players up for disappointment and resentment.

This feels mostly like a failure of (a) rollout planning and (b) communication. The Vault event with Cursed Gnomes active: a lot of fun. The “boosted” periods before and after the Vault? Big load of nothing.

Well thought out post, but the devs actually did implement a way to finish soulforge within the week. It just had the unfortunate timing of being a vault weekend on Christmas. And switch actually got one too, on new years. I’m pretty happy.

I am going to curse every time I come across with a cursed gnome.

I only want EVK and VK. They are like gems. I need them all the time! 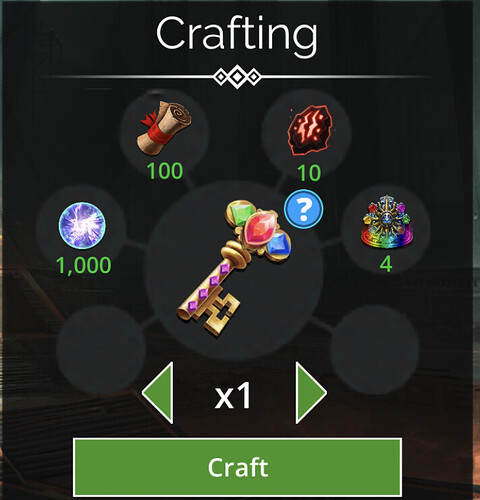