I just thought I’d share some info with you about future console troop releases, because I’m sure many of you are curious exactly HOW we’re going to catch you up to Mobile/PC.

In handling the plans for the catch-up, we’ve aimed to hit a few targets:

So here’s the plan:

That’s not going to put you all on exactly equal footing with Mobile/PC with regards to the acquisition of all troops, but there’s no way we can ever do that perfectly, I don’t believe, since they had a year’s head start on you! What’s more, it’s not as if you’re playing against each other, so having slightly different power curves isn’t going to be a dealbreaker.

Once you’re all caught up, however, it’ll be absolutely glorious, as every announcement about new content will apply to BOTH platforms, and you can all enjoy the same content at the same time!

First comment yay, look at that plan for console.

I’m sure they will get over it as I cant see the glory discount being that great.

I don’t know that I fully understand the plan for Legendaries (will we have a chance to focus our efforts on these with event chests?), but otherwise, this sounds great! Looking forward to the roll-out!

Legendaries will just be going into all chests during this period

Dang, so I could be waiting months to get Bunni’nog…

Thanks for the quick response, though.

To be honest, Bunni’nog is much too niche to be a Legendary, in my opinion. Typically, “good against [specific type]” troops tend to be Epic. He’s more of an Epic to me than Legendary.

This is what I envisioned happening and that suits me 110%. In fact, I thought 3 MINIMUM would be happening every week a LOT.

“Glory packs will have a slight discount”

That’s fair on us and I don’t think anyone can say otherwise.

“Mythics will appear two at a time”

That’s an added bonus I’ll happily take, too. Under 2-3% of the entire console playerbase will even get a mythic and then there’s getting said mythic fully traited.

Either way, I’m happy with the way this is being handled and don’t have any complaints.

Looking for Bunni myself. Coming up against a lot of knight teams so would be nice to trait him

Sounds amazingly fair i hope our Console comrades get a discount of 20% glory at least on each pack. Assuming they would ignore the commom packs, because it’s easier to get gold keys, it leaves Ultra-Rare packs at 240 glory and Epics at 320.
560 glory weekly is reasonable for at least one of each card to complete the collection.

Yes. If I recall the original post on this catch up plan. I think in December? Probably after the Guild update on PC.

Probably right after the Guild update on PC.

Guild update on PC? That should be within the next month or riot.

Probably right after the Guild update on PC.

Guild update on PC? That should be within the next month or riot.

I don’t think you’ll need to haul out the Peasant’s pitchforks for the riot yet. It does look like they are very busy with all these different balls in the air.

Getting daily quests on pc/mobile will be awesome

Just make sure each Arcane Traitstone is in a pack (All 21 except Dark have an upcoming Troop) and I honestly have no complaints.

Is PC returning to 1 Troop a week soon? Kinda hard to catch up if we get the same amount of Troops each week.

Its kind of nice when the a Task or two corresponds with the Weekly Event. In this case Pridelands on console, I’ve got a reason to try out Rakshanin in PvP.

In addition I’ll like make another plug for adding a TASK E (weekly task) that somehow corresponds to the weekly kingdom event. 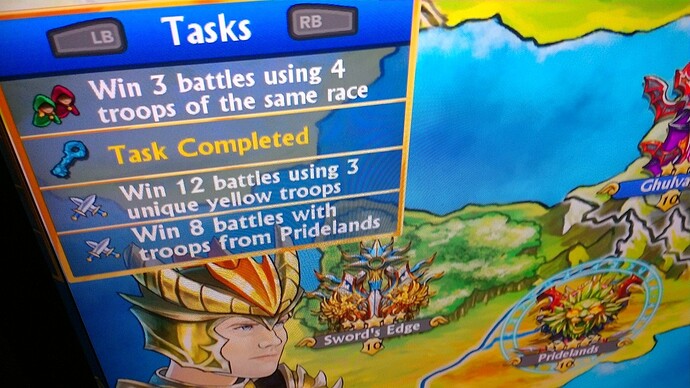 Is PC returning to 1 Troop a week soon?