From today (Friday 20th December 2019) we are changing the way we receive and handle bug reports for Gems of War.

Why are we making these changes?

The game community is constantly growing which means we needed to take another pass at evaluating and streamlining how we support the community.

Something we’ve found is that we receive multiple support tickets about the same bugs or reports we need more examples or information about from other players who may be affected.

Answering these tickets takes a considerable amount of time even though a lot of the tickets receive the same answer. By moving all bug reports to the forum, we can have each bug with its own thread where others with the same problem can add information, or see what helped others. It also means that a Developer only needs to reply to one bug report, and not to 50 bug reports about the same issue.

In response to moving bug reporting to the game forum, we are committing more time, more regularly to communicating with you on the forum about the issues you’re experiencing. Players who report bugs won’t have to wait as long for a response on the forum as they do when they submit a bug report ticket.

This doesn’t mean that a Dev will reply to every single bug report thread. Here are some examples of why a Dev won’t respond to a Bug Report Thread:

So, what are we going to do with this extra time we’ve saved?

We expect to be able to help between 100-200 more players per month in our support desk.

That means up to 200 more players per month, who need the 1:1 assistance with account and technical issues.

We have also updated our internal bug reporting tools and processes in order to more effectively communicate what is most important for our community and impacting you the most so we can take that into better consideration when prioritising issues.

We feel good about having more time for support tickets in addition to also being able to be more present in the Bug Report section of the forum which is something we’ve received feedback about!

16 Likes
Welcome to all LGoH refugees: quick GoW pointers
[REPORTED] Ankh of Nefertani not appearing
[Not a bug] Infernus spell doesn't always hit the second target
[Not a bug] Spells boosted by blessed allies do not benefit from caster
Community Council
AMT December 20, 2019, 5:12am #2

If a Bug Report contains abuse there won’t be a Dev response - We’re happy to take feedback about the game, decisions we’ve made and even the way we communicate with you, but if you abuse a staff member they’re not obligated to respond.

Will you still be deleting posts/comments that you personally consider off-topic, even if they are not abusive? ( [Investigating] Queen Moonclaw never summons more than 9 Skulls - #10 by Kafka )

If so (and assuming this ‘selective deleting’ applies solely to bug reporting), you may wish to mention it as part of the changes in the OP.

If I might add, I think it would be great if you could post something when a bug is fixed.

I’d also like to see some indicator whenever a bug report won’t receive any dev response, something like “[Resolved]” or “[Known Issue]” in the title.

Then you probably also have to sort out the forum to make certain cathegories - News, Bugs, etc. Currently it’s already messed with all these recruitment topics which are bumped very often. If all bugreports will be also here… meh. Imagine a user which intersted in news but not bugs or recruitment.

Then you probably also have to sort out the forum to make certain cathegories - News, Bugs, etc.

There is already a category for this, “Bug Reports”, just like this post is in “Official News”. You can filter by category using the dropdown on the upper left of the main page.

Furthermore, under “Preferences —> Categories”, you can choose entire sections of threads to ignore: 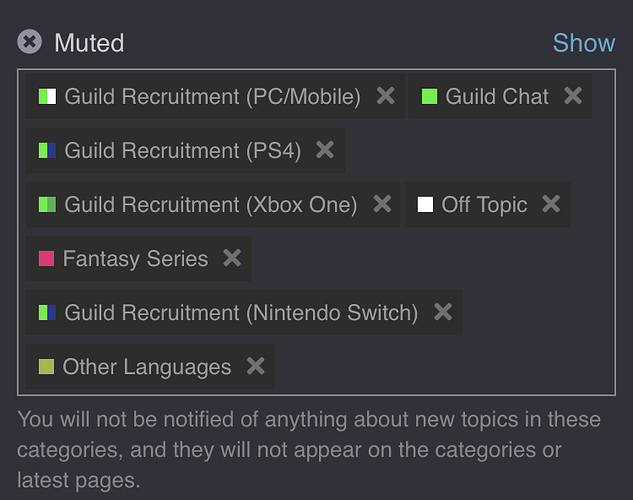 This doesn’t mean that a Dev will reply to every single bug report thread.

I’m gonna be the second to say this sort of implies there should be some marker that “a dev has looked and decided not to respond”, which is sort of like saying "Devs should respond, even if it’s just a 10-character phrase.

For the first case, sometimes it’s not clear that the problem is resolved because for the less-documented parts of the game people bicker about the things we don’t know. For the second case, sure, someone usually links to Known Issues. (3) is a little subjective but should probably be addressed via forum discipline.

Does case (3) mean you won’t fix a bug if you decide there is abuse in the bug report? What if the OP itself is fine but then other players hop in and post bad things?

This situation makes me think it’s worth reposting my bug reports every 24 hours. If I time it right, players won’t respond before the dev and I have to get a response, right? I’ve got a couple I posted at the start of the week with no responses, I’ll repost them tonight.

Ok, thanks. But it’s danm not obvious.

a dev has looked and decided not to respond

Back in my community moderating days in Google+, I pressed +1 on every post I had seen so members knew they had been read by a moderator.

The forums (and many social networks) complicate this by using “like” or “favorite”. There’s a weird implied social cue to doing that.

I don’t know a good one-click solution so I’m not going to kick and flail, but it does seem to imply sometimes reposting a bug report might be wise.

Yes, I will make sure I mark every thread title once I’ve looked at it.

I think the only reason I don’t mark thread titles right now is if more testing is needed because I prefer to post after testing than before. I can easily add something like [Testing] or [More info needed] to the thread title and reply in the case of requiring more information from the OP.

I feel like putting that in the thread title is better than <3ing the post because people who aren’t forum regulars may not know who the Devs are or that liking it is a Dev acknowledgement.

@Slypenslyde please don’t create multiple threads about the same bug report as it increases our work load which mitigates the reason we’re moving bug reports to the forum. I think it’s fair though that if a bug report has been bumped off the first “page” without any sort of Dev acknowledgement that it can be bumped. I’m hoping that would never happen though as I’ll be replying to bug reports more frequently now.

Even if there’s abuse in the bug report we’ll be doing what we need to (testing/fixing) but we won’t be dignifying that behaviour with a response. If I need more information from the OP in a thread where there’s been abuse, I’m going to delete the abusive posts before I respond and move off topic posts to the feedback section (or wherever they belong).

Basically, the Bug Report section should be for problem solving. If people want to give feedback it should go in the feedback section. It’s actually important to make this distinction between problem solving and feedback, sentiment and opinion because we’re lucky enough at Gems of War that our programmers read and respond on the forum directly, but they’re here to do a job ie. is there a problem in the code? Yes? Fix it. Let’s not slow them down

I think I covered everything that was raised about this move? If not just let me know

Will you still be deleting comments that you personally consider off-topic, even if they are not abusive?

I will be moving off-topic posts to the correct forum section or suggesting a new thread is created in the correct section to continue the discussion.

Thanks for the response: I was asking about Comments within a valid bug report post.

As am I - (character limit)

Thanks again for taking the time to clarify: I understand then that non-abusive comments within a valid bug report post will no longer be deleted. This information will hopefully be useful for future posters to know when navigating the system.

Thanks for pointing this out! This will be fixed for the next Bounty event and we’ll check the other Live events too. Off topic, unhelpful posts deleted - if you have something to say about how we handle bug reports, post in the feedback section please. Otherwise if you’re being snarky for the sake of it, this isn’t the place. This is the place for solving issues.

Ok, at least now it is clear that non-abusive comments may still be deleted: at least it won’t catch anyone off-guard.

Does the staff also review feature requests on a regular basis?

The Bug Report section is purely for receiving bug reports, ensuring they’re actioned and viewed by the Devs who are responsible for testing or fixing them.

While we have trained staff like Salty to handle feedback, which can often be worded in less constructive ways or go into deep discussion about the cause or lack of certain features - which is often interesting to read but mostly we want the team focused on fixing and implementing things and actually coding or doing the art or whatever other work is involved than spending the time reading and possibly getting upset by some of the things that are posted. So Salty and the other team members who read this section compile the feedback and turn it into actionable items for the team.

I can suggest similar tags get added to the feedback section threads however, they’re usually longer ongoing open ended discussions so I’m not sure how well it’d work there.