Originally published at: All the Rage – Gems of War

New Ultra-Rare Troop: Spirit of Rage The Spirit of Rage will be available this week for 300 Glory in the shop as well as in Event Chests, and will appear in Glory, Gem, and Guild chests in 3-4 weeks’ time. World Event: Baba Yaga’s Deal There are 6 battles that players can encounter during the…

Edit to order posted above

Would have made more sense if the battles had been presented in highest>lowest scoring order?

Expecting too much though

The title describes pretty much the community mood…

Same with the recent releases… 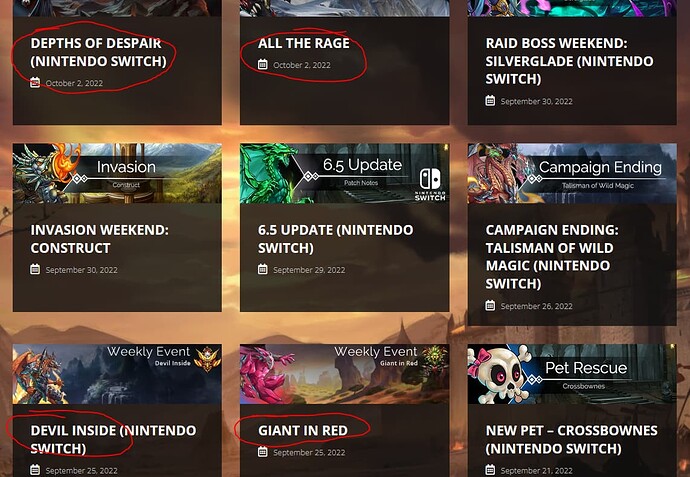 is there another (hidden) pattern?

May I add if the GoW community doesn’t stop getting Crossbowned by IP2/505 Studios, any and all Campaigns in this game will have a sad ending

This information will be posted in global chat channel 429 on PC/Mobile, at weekly reset

is this the post where you would announce if Stoneshell has been put in chests, and has it?

I’m still wondering about Medusa. She was supposed to show up in chests weeks ago, has anybody seen her yet?

Ive been looking for her too. No sight so far. Opened few thousand gem keys and couple hundred thousand glory spend. And ive been keeping eye on the global channels. I would say its not in the pool yet

And there hasn’t been any sort of acknowledgement or response from the Community team at all to anything that was posted. Talk about selectively seeing feedback …

Oh, they acknowledged it: 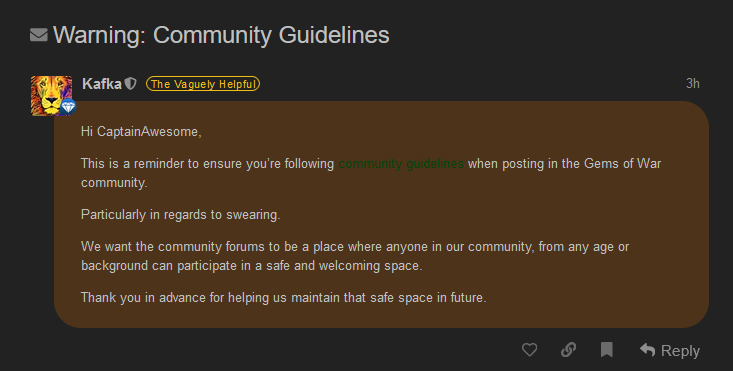 Welcome to the club!: you get used to navigating the selective hypocrisy (is that a Tautology?

), and it becomes exponentially easier once we realize that they are the ones who have to live with their actions/inactions, including but not limited to how they documentedly treat the playerbase.

I got more from sls today

Player (sls) got banned from forum for no reason Bug Reports

[grafik] Here the link to his messages. Feel free to find something that deserves a ban:

I wasn’t just talking about moving the daily dungeon results thread to Discord the other day, I was advocating for the entire community to just up and leave the forums since there’s no real communications here. The only thing that gets posted here which has any relevance is the official News announcements which get put on said Discord sources immediately.

Why should we participate in a process that isn’t rooted in good-faith?

I agree with you, but I doubt this will work as intended. They will probably sneak someone in or have already and once they realize that we don’t talk here anymore, they will check dc and search for our solutions that way.
Even if we create a secret server with restricted permission (i.e. only trustworthy guildleader), who guarantees that not one of them will talk anyways?
On the other side, who is going to take care of players who don’t know about our plan and report bugs (patterns) by their own here in the forum?

Good idea, but difficult to deal with.

I was gone from the game for awhile, so is it normal that the WE leaderboard is showing guild scores? Just wondering, because I’ll gladly play more for the guild, but if it’s bugged and changed later I’m just throwing my gems away…

Only during Tower of Doom afair.

is it normal that the WE leaderboard is showing guild scores?

The one time I remember WE having a guild leaderboard the devs came in with an “oops, sorry, let’s fix that” and changed it to individual leaderboard. So I probably wouldn’t go all in at this time.

Our guild was actually enjoying WE for a little moment, but let’s see what tomorrow brings

Welcome back mate, where have you been?