So far i like chasiing the gnome already killed it 4x and got a vault key and did the fight against gnomes team. But with all these changes im affraid pvp doesn’t worth it anymore, the time you do 1 pvp fight you can make 5-6 explore and get more chance to see the gnomes. So i guess pvp will now need revemp

What’s everyone’s opinion on the new status effects? I only saw burn so far and while it’s better I still find it covering numbers, even though it’s far more pleasant to the eyes. 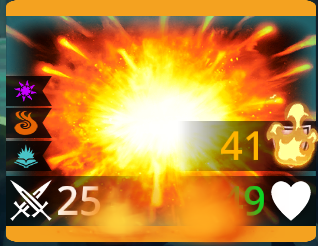 Its one way to avoid playing Psion/Ragna all day lol.

Still will have to touch pvp to get gold to donate to the guild though.

where do you get the new stones (orb) in the soul forge?

There’s one downside to these awesome gnomes.

Unless we’re getting like 1000 gems as the final reward. (minor hyperbole)

Honestly at this point, I expect a nerf to Gnomes to come in REALLY soon. It’s pretty ridiculous what you can get from them. I’m sitting here with penumonia and a really high fever and am like “I must get Gnomes, they will be nerfed in a day at the latest” when actually just wanting to crawl into bed.

Also seriously I cannot get over how awesome the non-transparent board is omg it is so good I don’t even knooooow!

Wait before asking nerf cause we don’t know what other event rewards, if they only rewards orbs i will be happy to have this gnome and get a little chance to win more gems

They don’t need to nerf Gnomes they are so freaking rare as for me might as well be a unicorn I can’t believe Sheba has had 8 already I finally got one after over 100 explores and it gave me 1 vault key. With the one vault key though I did get 10k gold, new Valraven troop, 4 gem keys and 3 event keys.

Um… The balance of Gnomes in Explore to PvP seems a bit out of whack.

Wait, it gave you three things? Huuuuh. Mine only gave me one each, so hey, your one gnome was an awesome one.

@sheba sorry i wrote the wrong thing I’ll edit my post. The gnome gave me a vault key and the vault fight gave me the 10k, and 7 keys and the new “ValRaven” troop my bad!

Also I still haven’t found another Gnome, so I guess I either had a LOT of luck or a nerf already happened?

So far i like chasiing the gnome already killed it 4x and got a vault key and did the fight against gnomes team. But with all these changes im affraid pvp doesn’t worth it anymore, the time you do 1 pvp fight you can make 5-6 explore and get more chance to see the gnomes. So i guess pvp will now need revemp

I’d have to disagree. While some people on the forum have had amazing luck with gnomes, many people haven’t had good luck finding one at all. I’m on explore 50 right now and haven’t found one. So, I’ll still play PVP for efficient gold collection. Others will still play PVP for trophies.

Please fix Sol’Zara. She’s the only troop I paid $50 for when I had no idea what I was doing and I had buyers remorse immediately. She is currently not doing trip damage or soul gen and has more hp than she should. It’s not like she wasn’t a pain in the ass to use already.

A great deal of guilds in the game still have trophy requirements. So, just because you aren’t grinding trophies, it doesn’t mean others aren’t. lol

So, some will play more explore while others will continue to play PVP for various reasons.