Consider it passed along. We will investigate.

Much appreciated. Has been fun to use but quite a bit less when his attack is basically halved in this bug 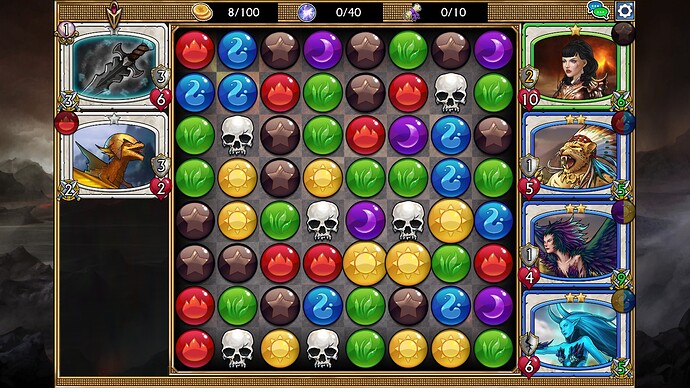 …and this is what happens when I click on the spell icon: 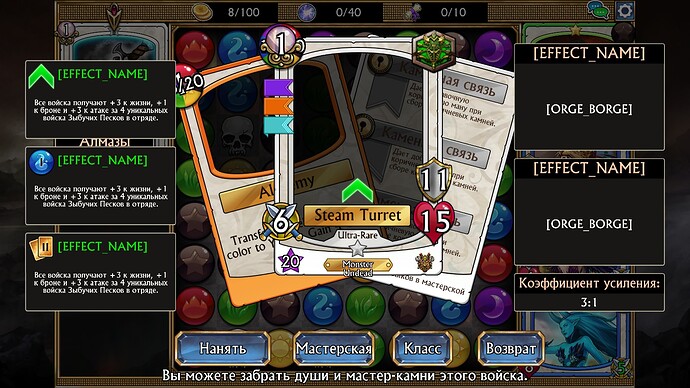 If you are playing on Mobile this issue will be fixed with the Unity update.

Good to hear, thank you for the update.

Hey everyone, looks like a whole bunch of players are getting a "servers out of sync "error on Mobile. We were making some tweaks server side and accidentally caused this. The fix will be out in twenty minutes.

Looks like the fix is out, please restart your game Mobile players!

It would be nice to get 4x play speed on Mobil version as they have on counsel and I also would like the option to click back when upgrading troops to use all that way I don’t have to hit the screen 25 times to upgrade a troop, it is really annoying.

It’s coming. The devs have started limited beta testing of the Unity version of GoW on mobile devices (Unity being what gives PC its 4x speed and the “press back once” ascension). Once they think they’ve addressed most of the bugs, they’ll release it to the live servers. They surely don’t want to release buggy code and have to issue patch after patch.

If a troop dies in arena and summons another troop upon death that troop will have Level 15 (that is correct) but level 1 stats (not correct). That is the minor inconvenience. The real problem is…

If you switch to PvP or GW and a troop dies and summons another troop, this troop will be Level 20 (ok if you got it like that) but has lower level stats (maybe 15?) too. This isn’t only for yourself, but for the opponent too.

If you yourself summon a troop it does not happen, everything is fine. Only upon death.

Clicking on trait stones in the class section of the hero tab does not show where the trait stones are available as it does with troops.

I’ve noticed an issue on the PC where only the first pixel or two of movement of a gem matters.

Normally this isn’t a problem but every now and again, as an example, I might have my cursor near the top right corner, and see a gem in the bottom middle I want to drag left.

As my cursor is at the top right corner, my initial movement is mostly down, and a little left.
As I pass the gem I want I click/hold the left mouse button on it and change direction to go almost straight left.

Unfortunately the first couple of pixels of movement as I’m changing direction are down (or more down than left), and this registers as a downward motion of the gem.

Normally this isn’t a problem but I’ve been in situations where this completes a set I didn’t intend to complete.

Some possible fixes for this:

My main concern with this bug is accessibility. Now that I know about it, I can be careful to always stop mouse motion before I click/move to make a gem movement. Users who lack fine motor skills may not be able to account for this, and may not be able to enjoy your game to the fullest.

On mobile atm in ranked pvp the 3 enemy picture and team score is totally different that the team when you click it.

Agree. The pictures are correct but when you scout you see a completely different team to what you actually play

What @Whiskeyjack is describing doesn’t happen all the time; I took screenshots to substantiate it after noticing the first such occurrence, but it hasn’t happened since.

It is grossly unfair to early-game players when they can’t trust the scouting report. It’s already a problem for them because that team with 4000 score might be hiding a 9700-point powerhouse. If they can’t learn what team they face until starting the match, I see a lot of anger coming down the pipeline.

Barrier won’t stop by itself (without damage).
Draco can’t disintegrate troops with barrier as I noticed here.

Barrier won’t stop by itself (without damage).

Do you mean that barrier won’t go away if the troop doesn’t take any damage? If so this is intended.

I may have encountered a different oddity with barrier. I was using Moloch, and I’m pretty sure a 4-match that reduced armor left up the enemy barriers. The second one to target armor popped the barriers, though. Have you seen this?

I don’t use barriers much myself. Does it happen regularly when facing/using Moloch? Also was this on PC or Mobile? or both?

Mobile. I only use Moloch for Guild Wars, and rarely have to deal with barriers on those days. Guess I will set up a defense team of my own to try and replicate this.