Yesterday I was working on a ‘Quick Guide to Solo Events’

There were a few boxes I didn’t have concrete answers for. Some of the boxes I could math it out but didn’t have real world verification that it was possible.

How you can help

Do you have the answers for A B C D or E? Are they estimates based on your own calculations or perhaps you have actually done it yourself? 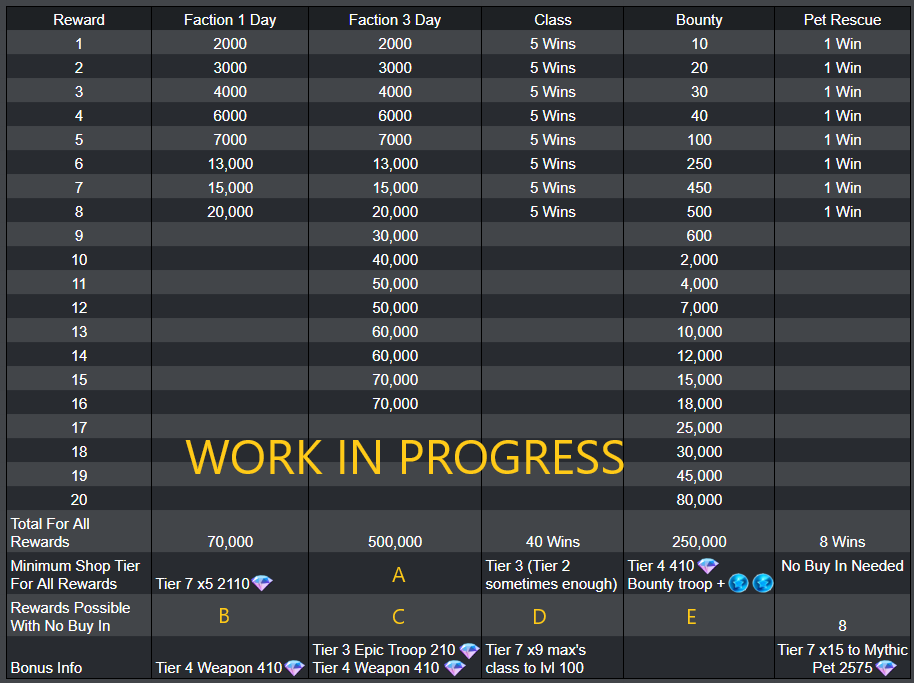 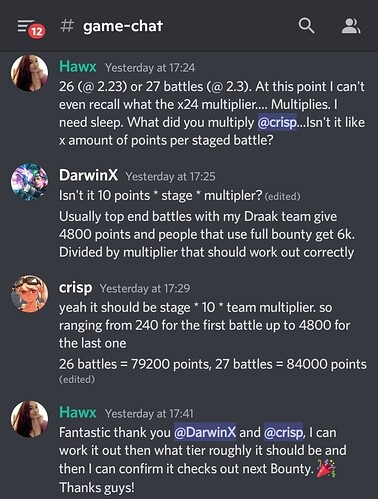 I know that there are some important points to why you should buy in to get at least one copy of the bounty troop or that you shouldn’t waste gems on class events etc but this is purely just for what’s possible rather than what’s good practice.

B One-day Faction Assault with no buy-in is usually Reward 7, sometimes Reward 8.

D Class Event with no-buy-in is usually Reward 4, sometimes (rarely) Reward 3. It’s often exactly 20 battles, but has been between 18 and 22.

I do both of these with no buy-in most weeks. For the one-day Faction Assault, I buy a single tier at the end if needed.

There’s one exception to B, All-Seeing Eye. It only has 8 rooms instead of 9, so the total score is lower. It’s enough to reach reward 7, reward 8 needs the first shop tier.

For B, refer to my sheet with faction rating.

No data to give you for Weekend Faction event, as now there is always something new, and I didn’t collect the data before Deep Delve. Only know that event ended around level 220, and 12 free sigils likely can’t get that high.

For D in class event. I never spend my gems unless it’s new class, and I always get first 4 rewards, so 25 gems. Sometimes I get 2 more battles, but no more Valravens ever show up, so I stop trying.

For D in class event. I never spend my gems unless it’s new class, and I always get first 4 rewards, so 25 gems. Sometimes I get 2 more battles, but no more Valravens ever show up, so I stop trying.

There seems to be a very small chance to only get the first 3 rewards, without any Valraven escaping. Happens to me maybe one or twice each year (anecdotal, so it might be off a bit).

For D Class Trial: i do them since years without buying tiers, always got reward 4, happened two times in years that i only got reward 3.

Only know that event ended around level 220, and 12 free sigils likely can’t get that high.

Even if it’s not exactly every 3,5 floors but 4 floors instead (which it isn’t that much for sure), you would get up to 250

Ofc all depends on the faction and its average multipliers, but gettin up to at least floor 250 or 290 should be enough to get max rewards for free)

Edit: All calculation been done for all factions but All-Seeing Eye

btw @Hawx , what is your data about class trial tier 3 (tier 2 sometimes) is enough to get all rewards?
as far as I remember from hundreds of posts in different channels, i never saw someone finished it with tier 2.
what i have seen is: “I got lucky and finished it with tier 3.”
what i have mostly seen is: “damn, i bought tier 3 and like always i fell short of last battle for round 8”

If it’s < 195, you need Tier 1 to get all rewards. Sometimes luck can bring you over, but very likely won’t. So without buying, you will be a few points short of Reward 8.

Been there, got the T-shirt. 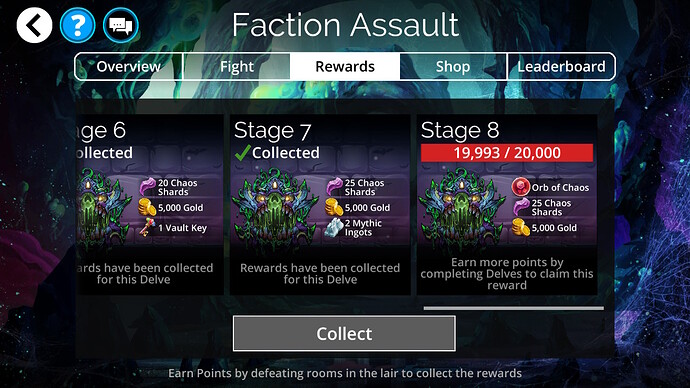 btw @Hawx , what is your data about class trial tier 3 (tier 2 sometimes) is enough to get all rewards?
as far as I remember from hundreds of posts in different channels, i never saw someone finished it with tier 2.

See this is what I thought too but there were 2 forum threads from 2019 where they said tier 2 was enough a few times in the thread. Thinking back to 2019 Im wondering if they were mixing up the new class events of a weekend, that would make more sense because I’m with you on tier 3 but I don’t like to do the chart just on my memory, seems best to do it on peoples actual experience.

I’m glad you raised it because I’m pretty confident 3 is the correct tier. I’ll absolutely update it

I had maybe just 2 or 3 times the case that tier 3 was enough for max rewards. ~95% of my class trials I had to go with shop 4 (back in the days when chaos orbs matter and buying some tiers were important to get enough for a cup of tea with Davie Jones

Don’t forget that you get a total of 12 free sigils (4 per day) on weekend Class Trials, but only 8 free sigils on Thursday Class Trials. I never buy tiers during Class Trials as I personally don’t think it’s worth the investment, but from what others have said it’s tier 2-3 needed to unlock all rewards during weekend CTs and tier 3-4 needed during Thursday CTs. Depending on your Valraven luck, of course.

Anychance you recall what reward stage you got up to on a weekend class trial like Geomancer or Elementalist?

Stage 6 (30 battles) with only free sigils during those two weekend CTs. But it could vary a bit depending on Valraven spawns.

I have to correct my numbers since I goofed up the expected score for max rewards.
Also I have to adjusted the ravens I encountered this weekend (Hall of Guardians rework):

Conclusion:
Tier 2 might be enough in some cases. Tier 3 should always be enough.
Using the list from @TimeKnight:
Hall of Guardians is below 3.9 multiplier 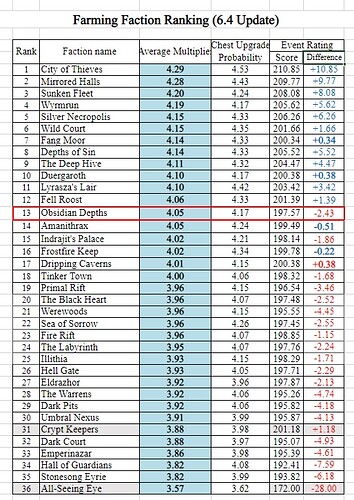 Hall of Guardians is below 3.9 multiplier

While Average Multiplier is a good indicator, room order is also very important. If Legendary, Treasure are accessable early, finishing the event will be faster.

I didn’t change Average Multiplier and Chest Upgrade Probability in the table with Deep Delve, because the table is meant for farming in the Underworld. Farming shards with Deep map is not recommend, as it costs 2 scrolls. Gnome farming in Deep Delve is a different thing entirely.

I usually go for the highest possible score using my delve calculator where its automatically calculates the optimal way.

To use the program you need OpenOffice Calc (https://www.openoffice.org/download/) and a free acoount at pCloud. Download the file: https://e1.pcloud.link/publink/show?code=XZrQVLZfC0IrnlW3rSRV0f6dBO0dkFj6uby and open it. Afterwards use the pictures to put in the macro at the end of this textbox. Now you can work with the file. If you have questions, feel free to contact me. Go to Tools>Options>OpenOffice>Security>Macro security Change it to Medium and ok [Bild1] Go to Tools>Macros>Organi…

but I put it as 50% chance for both map to appear.

From my perspective I came to the same ~50% during events. Maybe you can go with that for your calculations and add an additional column for the event rating.
I’m pretty sure nobody will judge you for “not 100% accuracy” in that case

Here’s an unusual one for the current Tuesday faction event: 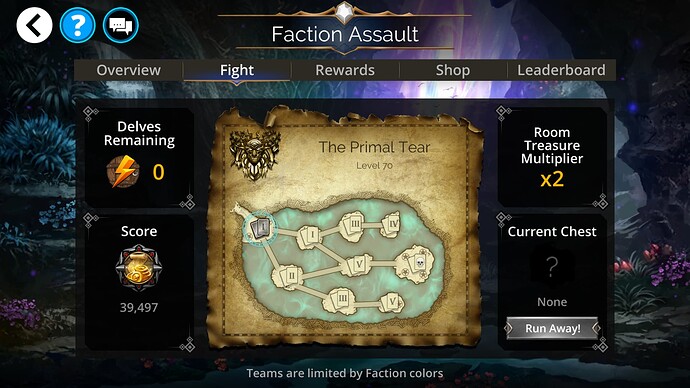 Out of sigils on completing level 60, all rooms visited, no Valraven escaped. Haven’t had that happening anywhere except All-Seeing Eye in all those years, apparently the second Valraven has a tiny chance to not show up even within the first 45 battles.

Do you remember when your 1st raven showed up?
Currently I’m gathering some data about it.
My average data goes from 31-43 battles between each raven

Do you remember when your 1st raven showed up?

It came in late, during the fights of the second level. Shouldn’t have any effect on the next Raven though. As much as is known it works like a pack of card, you pull one each fight. One of the cards is the Raven, you still pull all the remaining ones, even if you get the Raven with cards left in the pack. For Delve, the first pack is around 12 cards, the second pack around 34 cards. Other game modes have other pack sizes.