Who is really the # 1 Guild

If you guys want this thread closed just sprinkle it with some religion and/or politics.

Lmfao I love this, u guys don’t understand how much I appreciate the publicity!

The Guild # 1
Why not, but I think it is not enough to have players who play a lot, and for me I have another approach to a guild No. 1
Other parameters must be taken into account:
The atmosphere
Contributions
The relationship between players in the guild
Support
The activity offside …

Finally to say a guild “is the top” I’ll take this into account, and I think I find a guild that meets these criteria.

“only ranking League”, then I expect to see changes over several weeks. Thank you also to @actreal to its inventory:

Imtrim is certainly fine, but I expect to see in the long term.

I wish you the best, and good luck to you

I knew some of you all were good for something

Looks around for people who care and doesn’t find any Don’t worry i’ll turn off the lights on my way out.

I want to thank my friends here for the support. Recently I noticed that not many have been responding to my recruiting posts. I thought it could be because a lot of guild are looking for members right now. Our thread keeps getting pushed down the list.

I had a wonderful idea, why not let other players push your thread for you? So I created this thread to ruffle a few feathers and it worked. Because of the publicity that my friends here have given Intrim we were able to acquire some very strong recruits. Two of those happen to be I the Top 10 PVP Rankings right now! Please stay tuned thanks again I love allot you guys. @Sirrian @Nimhain Can you guys now close the thread, no more problems from me guys I got the response that I wanted.

Every game has a guild for jerks,but they get bored pretty fast with an unstable leader.

All in all, I like to be involved in a game with all types of personalities. The world would be mighty boring if everyone followed the same straight line.

Great leaders do not only inspire their people to get to the top, but they also inspire them to want to stay there.

Intrim has definitely been a force since they were created and they should be commended for that. It is hard to argue with results. Time will tell if it is sustainable.

I remember when the Yankees were the best run team in Baseball. I also remember when some dictator like leaders almost had the world under their control.

Getting to the top through sheer domination is one thing…staying at the top once you have gotten there is the hardest thing to do though.

I have seen a few other new guilds rise up very recently as well. New blood is good to keep things interesting for all concerned. I for one, love the ability to help new guilds rise up from the foundation, thus my main reason for joining Tacet’s new guild…who by the way, seems to be doing quite well for one week old.

Lol thanks again everyone 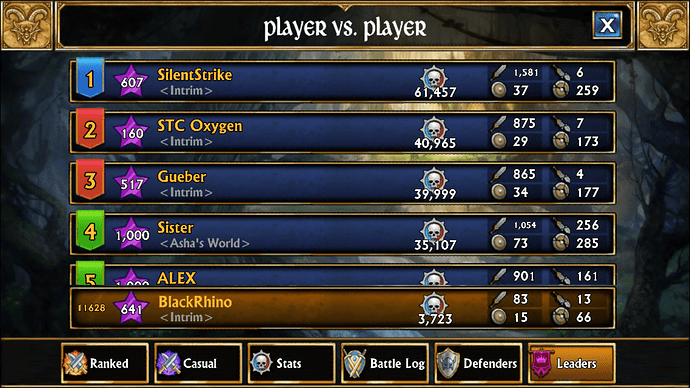 Hey Tat thank you very much for your kind words. I think I have sparked something in the older guilds because I’m noticing them starting to produce more. Many have also upped their requirements. I love what Dragon Peak is doing because it’s inspiring us to go harder. Healthy competition brings out the best of some people and it has done that to Intrim!

I look forward to seeing Intrim and Dragons Peak both at the top. It may not happen tomorrow but I think we can do it.

I can’t wait to see what the devs are working up in the lab for the new guild wars update. I know it’s going to be Amazing to say the least.

11628? Maybe you should be pvping instead of trolling the forums friend 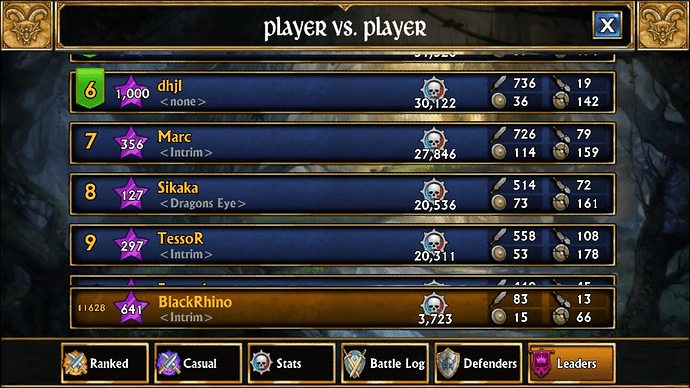 A leeching leader is the deadliest,you should kick yourself.

I see you got one of your guild members to sucker me into giving you our potential guild requirements, @BlackRhino. Congratulations. It won’t happen again.

I suggest all guilds be wary of inquiries from Intrim members. Apparently they are not as ethical as they might be.

You cant expect much with a leader like that,he is not even playing,and dragging his own guild down.Intrim has a lot of people like him,let them be together,it will end soon.

I’ve donated 1 million gold so far this week and near 300 trophies, I’ll double both at least this weekend. What have you done this week lol 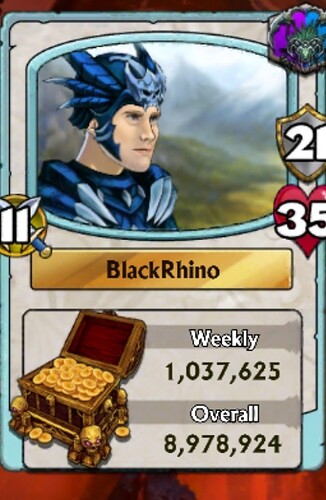 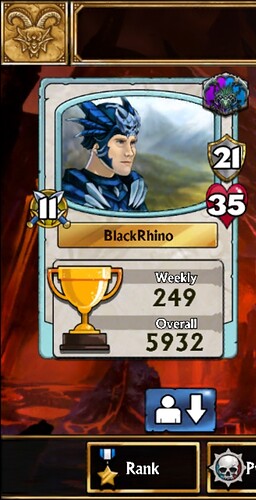