I know that we have threads for glory and tribute, but who out there has the biggest stash of maps? 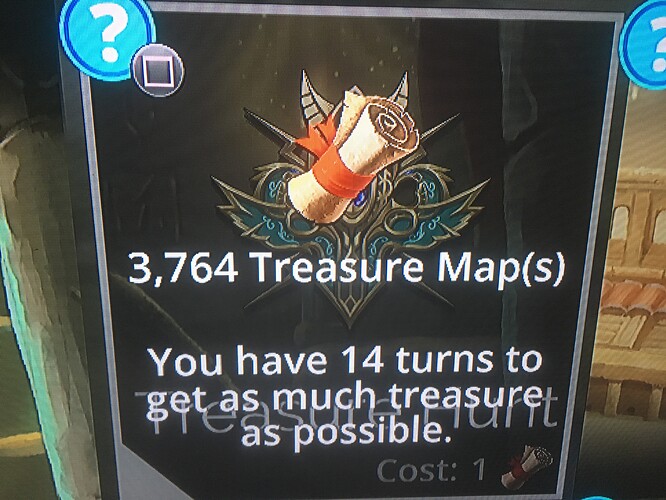 That’s mine. And feel free to leave some tips of new map modes and what we can to to burn these bad boys up.

My idea, use these for sigils in raids and invasion’s. Not gems. A pay to win that we aren’t mad about spending.

I can’t match you on the number of them.

I’d like to be allowed to donate them to lower level players. That’s who the mode is intended for, let me help them.

Ohh, nice, a trade system or even just donations to help, I like it!!!

I’m a big fan of spoils of war, so that is how I tend to accumulate so many, with all these legendary troops coming out, I burn all my resources up.

They should be made into a crafting resource for vault keys in the soul forge e.g. 100 maps for 1 vault key.

Mega map, put up to 100 maps into one normal game to increase the rewards for the same amount of turns to start with. Same amount of game time, but way better rewards for end gamers to chase.

They are maps. So they should help find treasures…
How about spend 1 map to get double rewards on your next match?

They should really consider doing something with this, maps are still in the store costing 30 glory each, even though this is pretty much outdated.

If they fix vault rewards that would actually break the game economy for good.

I think my maps would be gone if that was the case. What about orbs too? To mix it up a bit? Put them in the drop pool.

I would like the devs to give orbs of growth (the minor ones) as a reward here and remove them from Invasion and Raid drop pool - that would greatly buff the rewards you actually get for spending your gems on invasion and raid sigil packs.

Mine was just following the logic that it is, well, a vault. If they made orbs drop, then that new craftable mythic (Zuul) would be appearing everywhere.

I’d be interested to know how many vaults are produced per map on average. Given how many people say they struggle to reach 100 moves, my stab in the dark would be 10% across the total player base. Although I guess that may increase with the right incentive.

It would be much more if we were fighting for vault keys. Much, much more

. TBH they would probably have to nerf vaults further and that would only make everybody angry. My thought was that treasure map vaults could give us orbs of growth (and only these, as they are not worth that much, 1lvl only). Zuul still wouldn’t be easy to craft but if you needed 1 additional greater orb of growth you could grind your way through tresure maps.

Gra has over 6k i believe.

Or have different map levels where the more maps you use it’s a new tier, kind of like the raid and invasion system, with a tier shop. You buy your treasure keys with maps. Use the keys so many times and then when you run out it can start back at the base level. So it doesn’t have to be a weekly event. And then if you hit like 150 moves you unlock a new level. Eventually we’ll run out of our maps and be wanting more treasure maps.

Yep, a Treasure Hunt raid mode would suit me down to the ground!

Personally I wish you could buy maps 5 or 10 at a time.

Treasure maps could be exchanged into Dungeon or Ruins Maps with some battles and challenges could be interesting.

Do you remember when Ozball made a mockup minigame to combine crystals or something like that? I think there is some potential to be explored in that sense for multiple challenges still using the same board and some different elements/gems to be moved around like puzzles.

By the way @Ozball, that mini project of your was something that caugh the team’s eye when they considered offering you a job?

They are maps. So they should help find treasures…

Since the gnomes are the keepers of the treasures…
What if you can spend a map to increase the chances of spawning a gnome in Explore?

What do you think!?