What is the strangest team you've seen so far

No callouts but I must say I keep running across some of the strangest teams I have run across in PvP recently.

There is the 1 Zombie team (1 Mythic Zombie - fully traited)

A lot of 1 card teams only.

And then there was Kerberos - all by himself… I was a fool to think I could beat that.

Probably an all Sacrifice team. They killed themselves pretty quick. Gotta say it was fun to watch.

I think I have seen one of those…

Strangest? I see a lot of stranger teams on my lower level account. A lot of them just look like they mashed together whatever the highest rarity troops they happened to have at the time and hope for the best.

In high level PvP, a lot of people have their low score or throw the match teams set, which accounts for most of the “strangeness” - single shrooms, villagers, bombots, etc, some of which might even have a chance of winning 1v4 against lower level opponents due to matchmaking. I’ve also seen some creative teams that can occasionally be nasty if you underestimate them, too, but I think it would ruin the novelty of facing them if I shared them here.

However, sometimes, it just looks like they are trying to have a strong defense, but just don’t quite have all the pieces for the “meta” team and decide to make a little substitution. One that gave me a chuckle was Manticore, Manticore, Deep Borer… Keeper of Souls. So close, and yet so very far.

sometimes, it just looks like they are trying to have a strong defense, but just don’t quite have all the pieces for the “meta” team and decide to make a little substitution.

And there’s always the classic ‘the game has accidentally switched my actual defence team with my farm team’ which is the explanation for most uses of KoS and ALL uses of Aziris!

Goblins without the base common Goblin

3x Mythic/traited Ysabelles with a Pride Guard. That was pretty funny.

Fourgotha. Which is a thing I’d like to try some day.

MantiFour. Which has a low winrate but is annoying as hell

Fourgotha and Mantifour, now those are funny! =) I’ve seen lots of posts about how some people make defense teams just to slow and and annoy the crap out of the attacker. I can sure see evidence of that here!

I love that. I saw for Ysabelles today and just don’t quite know whether to laugh or take them on.

Or just keep the trait(s) stunned. EK is pretty good at that.

I changed my defend team to Mantifour last night just for grins. The funny part is I’m about winning about 40% of the attacks lol.

I just saw a 4 Abhorath team. It didn’t work very well, but it was still kind of neat.

This was probably my longest PvP fight ever because I kept letting the Mimics cast just to see what would happen. I did end up beating the easily even with them having double the health of my troops. 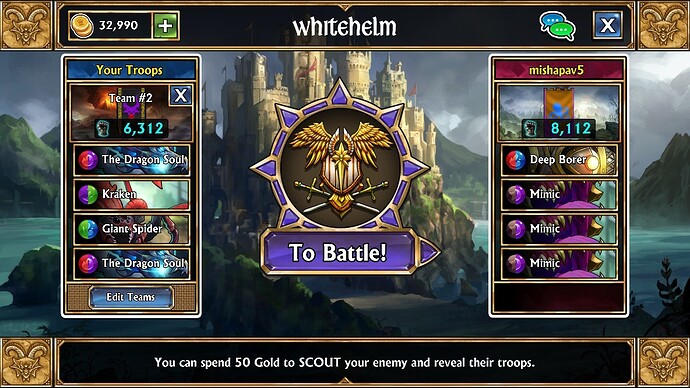 I would give up one of those Archons and replace it for a The Devoted or Paladin and just create a lot more armor — they can take a beating and keep on ticking.

Earlier I fought a 4 x druid team (unfortunately for them I got famine charged before they could fire), but this next one is really odd:

Including blade dancer and using that banner shows that this person has completely misunderstood what is so hard about fighting the current meta! I mean blade dancer is practically doing you a favour

Oh my god. I feel so sorry for that person. Any wins they have on defense must be pity-surrenders

I came across a solitary spider knight, ultra rare, no traits can’t remember the level. I had a Bunni in top slot with 5 x skull damage and the game started with skulls kindly lined up for me to match. One turn, game won!