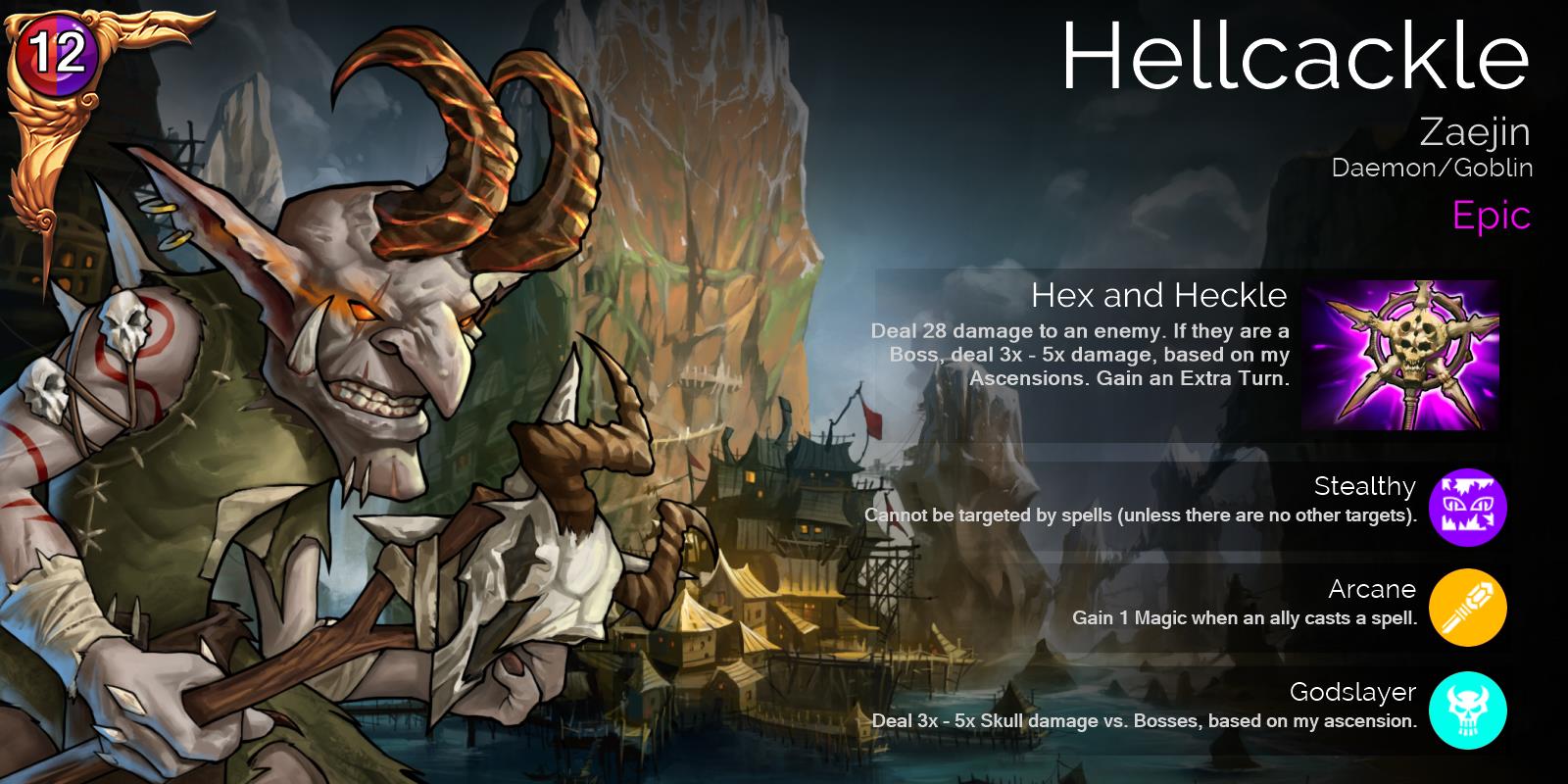 Goblins, rather like sand, tend to get everywhere. Norbert Pogthatcher made it most of the way through Grosh-Nak before he was distracted by a large shiny rock, which turned out to be the door to an Orcish Summoner’s cave. The Summoner, displaying typical Orcish hospitality, promptly chained up Norbert, and used him as a source of blood for his daemonic rituals.

It’s not certain how long Norbert was there, nor how many rituals he witnessed (and in his own O-postitive-type way, contributed to), but he eventually hatched a cunning plan; one night while being fed, he managed to sneakily hide a particularly slim and attractive turnip (he’s never said where or how he hid it, and most Goblins have been too afraid to ask). After a few weeks, when the turnip had become stale, he retrieved it, stabbed his captor in the eye, broke free, and fled back to Zaejin, but he was certainly not the same Norbert who left. His friends and family were terrified of this creature with the nervous laugh, and the strange golden glow in his eyes… they started calling him Hellcackle.

Two things are for certain though… Firstly, that somewhere out there is one-eyed Orcish Summoner with an unnatural fear of root vegetables, but second and more importantly, even the mere mention of a Daemon now sends Norbert Hellcackle into a murderous rage!

Hellcackle will be available in the Raid Boss Shop, and will appear in Glory, Gem, Guild, and VIP chests in 3-4 weeks’ time. 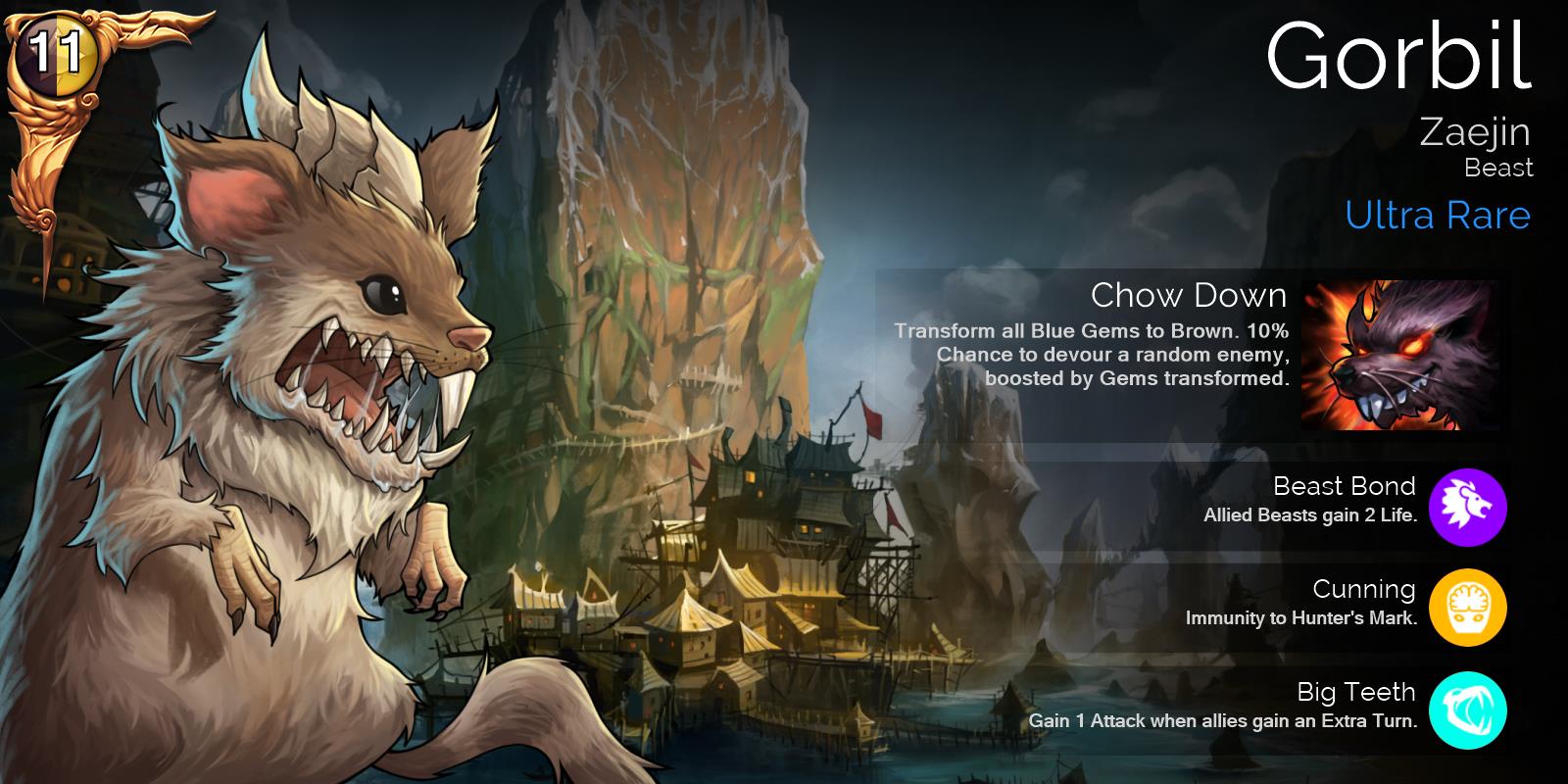 Some Sages believe that as a species evolves, the ratio of the size of its brain to the size of its mouth gets larger and larger. The theory is that with higher brain functions, a creature spends more time thinking about what it would like to eat, and less time actually eating it. Although at first, Deltora Danglewing, the famed Dragonian Diviner, pointed out that the existence of Dragons disproved this theory, it was promptly pointed out that Dragons, being almost perfect in every conceivable fashion, hardly needed to evolve anyway, at which point she fed herself to a red dragon in shame.

While this would mean that anteaters are the most highly-evolved life form in Krystara, at the other end of the spectrum there is the Gorbil.

Gorbils start off no bigger than a rat…with a mouth fully half the size of their body, and a brain about half the size of a split pea that’s shriveled up in the sun. Gorbils love to eat; in fact that’s pretty much ALL they do from the moment they’re born. Usually half the litter of Gorbils gets eaten by the other half, while the mother is high-tailing out of town, lest she become a snack too.

The other unusual thing about Gorbils is that every part of them (EXCEPT their brain) continues to grow for their entire lives - the more they eat the bigger they get! With most mammals, size is limited somewhat by gravity; after a certain point, it gets difficult to pump blood to the brain. But when your brain is size of shriveled split pea, it turns out that’s not really a limiting factor. As such, left unchecked, they can get as big as a house.

Fortunately for Krystara, Goblins have somewhat domesticated these creatures, and it turns out provided they get a steady diet of fruit, vegetables, trees, clumsy Goblins, and other smaller Gorbils, they’re fairly compliant (and quite tasty), at least until one inevitably gets loose.

The Gorbil will be available for 300 Glory in the Rewards tab of the Shop, will be in Event Chests this week, and will appear in Glory, Gem, and Guild chests in 3-4 weeks’ time.

Fleshrippers are favored weapons of Master Gorbil Handlers. Gorbils aren’t terribly bright… it takes a lot of training from a very young age to make them afraid of ANYTHING, but it turns out that a Fleshripper is possibly THE most painful thing in existence that you could ever try to fit into your mouth!

Glaycion
We always intended Gemhammer to act as a counter to Glaycion, unfortunately this troop change was missed when Dhrak-Zum was originally released.

Wow a new version of mang

@Sirrian I hope a valuable lesson was learned after the bounty disaster.

The trend continues with Purple Godslayers.

The trend continues with Purple Godslayers.

Too bad that both share exactly the same colors…

Will the next gnome event be this weekend?

Will the next gnome event be this weekend?

Yup and we got 3.4 so let’s hope they keep their promise this time, i expect buffed vault rewards, hopefully no more souls or minor stone.

And also i hope they nerfed nothing to compensate

Enemy line up for this week’s raid

@Santandrix, yes the next vault event is this weekend.

yes the next vault event is this weekend.

What about buffed vault rewards?

If the answer is no, just say it at least it’s better then no answer

So a no answer is better than no answer? Perhaps they need to cleanse the dev team so they stop being silenced.

So we wait to see if the devs took action to change the Vault!

You win this round, salty